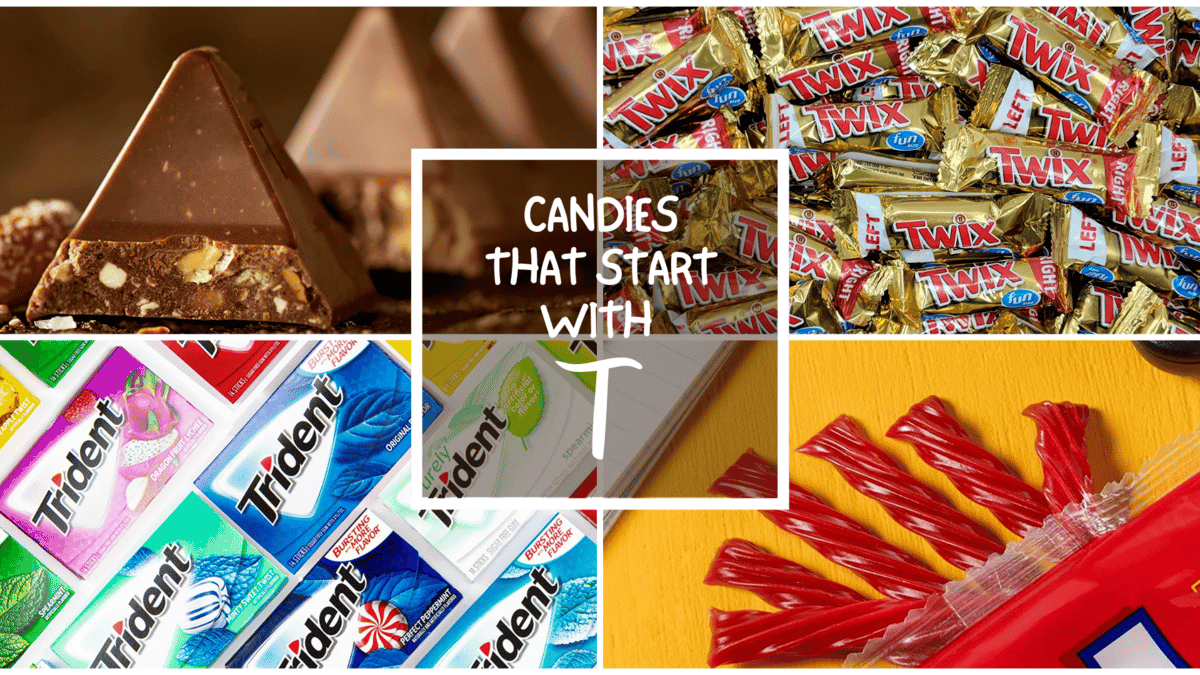 The top-notch candies feature on the T list will have you coming back for more. This list is loaded with classic treats, record-setting confections, and tasty candies galore. From mainstream popularity to a few lesser-known varieties, there are so many great candies noted herein. With chocolate and mints and gums and licorice, the T list of candies has a wide variety of sweet bites. Let’s dive in.

The 3 Musketeers candy bar was invented by Mars, Incorporated in 1932. Originally, the 3 Musketeers bar came in three sweet flavors: chocolate, vanilla, and strawberry. However, in 1945, Mars discontinued the production of the vanilla and strawberry varieties due to wartime sugar rationing. A 3 Musketeers bar consists of a thick, fluffy, creamy nougat covered in a layer of thick milk chocolate. Over the years, other spinoff flavors have been introduced; some include mint, mocha cappuccino, and raspberry, though only the chocolate variety is currently manufactured.

Though the original 3 Musketeers only came in a single, standard-sized candy bar, today, they’re also available in “share size,” minis, and fun-size. The main ingredients in 3 Musketeers are milk chocolate, sugar, corn syrup, palm oil, and cocoa powder. If allergens are a concern, beware that 3 Musketeers may contain milk, soy, and peanuts. Finally, a serving of the standard-sized candy bar contains 240 calories, seven grams of fat, 37 grams of sugar, and one gram of protein.

Tic Tacs are a small, hard mint candy that was introduced by the Italian candy company Ferrero in 1969. Tic Tacs are iconically packaged in a clear, flip-top container that easily fits into a back pocket. In fact, the unmistakable sound of Tic Tacs in someone’s pocket is recognized worldwide. Tic Tacs were originally just available in a white peppermint flavor, however, many other flavors are now available. Some popular Tic Tac flavors include orange, cinnamon, and strawberry.

For the small size of Tic Tacs, they pack a surprisingly big punch of flavor. Tic Tacs are made with sugar, maltodextrin, fructose, and flavorings. Although it’s impossible to eat just one mint at a time, Tic Tacs contain 10 calories and two-and-a-half grams of sugar per serving.

Invented in Switzerland in 1908, Toblerone is a unique type of chocolate bar that’s loved globally; today, Toblerone is manufactured by Mondelez International. A Toblerone bar is mostly milk chocolate with specks of nougat, almond, and honey throughout. The most unique thing about a Toblerone is its unique shape; the Toblerone candy bar looks like a series of connected, break-off pyramids. It’s believed that this iconic shape is meant to mirror the Swiss Alps.

Invented in 1931 by The Sweets Company of America, Tootsie Pops are round, hard lollipops with a chocolate Tootsie Roll filling. Since 1969, Tootsie Pops have been manufactured by Tootsie Roll Industries. Tootsie Pops became uber-popular in the 1970s with the airing of a commercial that begs the question, “How many licks does it take to get to the Tootsie Roll center of a Tootsie Pop?” It seemed Americans fancied knowing the answer to this question and sales took off.

Though the chocolate Tootsie Roll filling is the same in all varieties of Tootsie Pops, the hard candy shell originally came in five flavors: chocolate, raspberry, cherry, orange, and grape. Since its invention, though, Tootsie Pops have introduced other flavor varieties including collections of Tropical Stormz and Wild Berry assortments. Of note, the main ingredients in Tootsie Pops are sugar, corn syrup, palm oil, and citric acid. Concerning food allergens, Tootsie Pops do contain milk and soy. Lastly, a single Tootsie Pop has 60 calories and 11 grams of sugar.

In addition to the original size and packaging, Tootsie Rolls are also available in Snack Bars and Midges. Moreover, besides the original chocolate flavor, they’re also now available in a variety of flavors such as vanilla and fruit flavors. Notably, Tootsie Rolls are made with sugar, corn syrup, palm oil, condensed skim milk, and cocoa. A serving of the standard, bite-sized Tootsie Roll has 120 calories, two-and-a-half grams of fat, and 17 grams of sugar.

Manufactured by Mondelez International, Trident is a brand of chewing gum that was introduced in 1964. Trident was popularized as one of the first sugar-free gum brands that effectively combatted bad breath but had a delicious sweet taste too. Aiding in its rise in popularity was the popular Trident slogan: “The great taste that is good for your teeth.” Though Trident’s original flavor is peppermint, it’s now also available in Spearmint, Tropical Twist, Orange, Watermelon Twist, and many others.

Trident’s original packaging consists of individually wrapped, rectangular, soft-chew pieces in packs of 14. Today, Trident is also available in blister packs of chicklets with a hard shell, unlike the original soft-chew pieces. Other varieties of Trident include Trident Vibes, Trident Fresh, Trident White, Trident Layers, Trident Unwrapped, and Trident Splash. The primary ingredients in the original flavor of Trident chewing gum are sorbitol, gum base, glycerine, and a combination of natural and artificial flavors. Lastly, a single piece of Trident gum contains just five calories and zero sugar.

Trolli is a collection of German-made gummy candies that first came out in 1975. Trolli was a long-time US export and because of its popularity in the states, a Trolli facility now manufactures these ever-popular candies in Creston, Iowa. The original Trolli flavor is dubbed the Sour Brite Crawlers; they’re worm-shaped gummies, sour in flavor, and rolled in granulated sugar for a burst of sweetness. Each Crawler comes in a gradient of bright colors.

Trollis are packaged in bags of unwrapped candies that are perfect for sharing. Besides the original Trolli Crawlers, many other varieties are now available. Some popular Trolli flavors include Sour Brite Octopus, Squiggles, Mystery Night Crawlers, and Sour Watermelon Sharks to name a few. Trollis are mainly made with the following ingredients: corn syrup, sugar, gelatin, corn starch, and citric acid. Ultimately, a serving of original Trolli has 100 calories, 14 grams of sugar, and one gram of protein.

Though they originated in the early 1900s in California, Turtles are now manufactured by DeMet’s Candy Company in Chicago, Illinois. Turtles are chocolate clusters filled with caramel and pecans; they come two in a package and received their name because the shape of the chocolate cluster oddly resembles the form of a turtle. Today, they are available in a variety of packaging options including Classic Bars, Minis, and Bites. Additionally, Turtles are available in gift boxes and stand-up bags of unwrapped candies.

In addition to variations in packaging, Turtles are also available in a dark chocolate variety. The main ingredients in Turtles are milk chocolate, pecans, corn syrup, sugar, and nonfat milk. If allergens are a concern, know that Turtles contain tree nuts, soy, and milk. Lastly, Turtles have 260 calories, 15 grams of fat, 25 grams of sugar, one gram of dietary fiber, and three grams of protein per serving.

Invented by Cadbury in the early 70s, Twirl is a twin chocolate bar packaged similarly to Twix. Twirl is one of Cadbury’s best-selling candy bars and despite being a UK-based candy, it’s an international best-seller. Twirl bars have a flaky, milk chocolate center akin to a Flake bar, but go an extra step with its milk-chocolate exterior coating. Though the original twin-bar packaging, in iconic purple Cadbury foil, is the most popular, Twirl also comes in a Twirl Bites variation which is packed loose in a shareable bag. Notably, Twirls are primarily made with milk, sugar, cocoa butter, whey powder, and vegetable fats. Finally, one Twirl bar contains 90 calories, four grams of fat, nine grams of sugar, and one gram of protein.

First introduced in the UK in 1967, Twix is a delicious and extremely popular chocolate candy bar; actually, make that two bars! Twix bars are famously packaged as a twin set of candy; each bar is filled with crispy shortbread and creamy caramel and then dipped in milk chocolate. Today, Twix bars are manufactured by Mars Incorporated in Tennessee on the same platform as M&Ms. Recently, advertising for Twix has made a game of asking fans, “Which side will you pick?” and labeling the bars Left and Right.

Speaking of the label, Twix is packaged in an iconic gold foil wrapper with red writing. Besides the standard twin bars, Twix also comes in fun sizes and minis. Moreover, Twix has a couple of fun spinoff flavors such as Salted Caramel, Cookies & Creme, and ice cream bars to name a few. Furthermore, the main ingredients in Twix bars include milk chocolate, wheat flour, sugar, palm oil, and corn syrup. Lastly, an entire twin-size Twix pack contains 250 calories, 12 grams of fat, 25 grams of sugar, and two grams of protein.

Invented in Lancaster, Pennsylvania in 1929, Twizzlers have been a Hershey Company product since 1977. Twizzlers are a type of chewy candy that has long been called licorice, however, only the original licorice flavor Twizzler contained licorice extract. Though licorice was the first flavor, the red strawberry variety has always been the most popular; besides strawberry, other Twizzler flavors include grape and cherry.

Standard Twizzlers are made into long twists of interconnecting vines of chewy candy. These twists are fun to bite right into or untwist one rope at a time. Besides the original Twists, Twizzlers also come in Bites, Filled Twists, Easter Bunnies, Filled Bites, and other fun spinoffs. The original strawberry Twizzlers are mostly made of corn syrup, wheat flour, sugar, palm oil, and both natural and artificial flavors. Finally, Twizzlers contain 110 calories, less than one gram of fat, 15 grams of sugar, and one gram of protein per Twist.

As you near the end of the alphabet, the candy varieties really outshine themselves. From one big name to the next, there are so many noteworthy T candies to check out. Stay tuned to see what the last few letters have in store for you.