Spinacia oleracea which is more colloquially known simply as spinach is a leafy green superfood. Spinach is a very common flowering vegetable whose leaves are entirely edible. Spinach can be eaten fresh, frozen, canned, as a salad leaf, sauteed, and even juiced. Best of all, spinach is packed with vitamins and minerals as well as antioxidants. Many of the nutrients found in spinach are important for immunity, digestion, and eye and bone health, as well as fending off chronic illness. Take a look at some of the many ways incorporating spinach into your diet can benefit your health.

Important Note: The information provided herein is reflective of the most current scientific research at the time of this publication; be mindful of updates in the science if you’re checking in long after publication.

If you’ve ever seen an episode of the popular 30s cartoon “The Popeye Show,” you know just how beneficial spinach is to your overall health. For starters, spinach has very few calories per serving and is made up of more than 90% water. With very few carbohydrates, a respectable protein count, and loads of fiber spinach is a nutritious addition to your diet. Furthermore, spinach is loaded with vitamins and minerals such as folic acid, iron, and calcium, as well as vitamins A, C, and K1. Additionally, spinach contains other vitamins and minerals including magnesium and potassium as well as vitamins B6, B9, and E. Each of the vitamins, minerals, and nutrients contained in spinach plays a special role in your biological health. Some are good for heart and brain health, while others contribute to bone health and the oxygenation of your tissues.

General Consensus: 5/5 and here is why. Spinach makes the superfood list for a reason; it’s packed with tons of incredible vitamins and minerals, each of which contributes to your overall health.

In addition to all of the wonderful vitamins and minerals contained in spinach, there are also many useful compounds. Two such compounds are quercetin and kaempferol, both of which are beneficial antioxidants. By now you probably know that antioxidants are responsible for fending off harmful free radicals that lead to chronic illnesses such as cancer, diabetes, and cardiovascular disease. Querecetin can stave off infection and reduce inflammation. Best of all, spinach is the vegetable richest in quercetin so regularly eating it may reduce your risk for chronic illnesses. Vitamin C is another incredible antioxidant that’s linked to skin health and enhanced immunity. It’s no wonder spinach is called a superfood; with so many powerful antioxidants in a serving of this delicious leafy green, the health benefits are incredible.

General Consensus: 5/5 and here is why. Spinach is loaded with potent compounds and antioxidants which are linked by hundreds of studies to protecting the body against harmful free radicals.

Other important compounds found in spinach are lutein and zeaxanthin, both of which have long been linked to eye health. Oxidative stress caused by free radicals is minimized by these and other compounds. Oxidative stress can lead to macular degeneration and cataracts both of which can in turn lead to blindness. Some studies indicate that regular intake of the carotenoids lutein and zeaxanthin can reverse existing eye damage. Furthermore, spinach is connected to regulating blood pressure which is important because high blood pressure can lead to damaged blood vessels in the retina. Overall, spinach has a host of benefits connected to eye health.

General Consensus: 4/5 and here is why. About 40 or so published studies connect spinach to eye health; although they all come to the same conclusion that the compounds in spinach are beneficial to eye health, further research would be nice.

Spinach is rife with two compound components named MGDG and SQDG which are connected to inhibiting the growth of cancer. While one study showed that these compounds slowed the growth of a cancer tumor in a woman, another animal study showed that spinach consumption suppressed the emergence of a cancerous tumor altogether. Moreover, many human studies have concluded that eating spinach reduces one’s risk of prostate and breast cancers. Finally, antioxidants, which are ever-present in spinach, have long been linked to warding off the free radicals that induce cancer.

General Consensus: 3/5 and here is why. Although there’s plenty of research connecting antioxidants to a reduced risk for cancer, there aren’t many human studies specifically linking spinach consumption to reduced cancer risks.

General Consensus: 5/5 and here is why. Dozens of studies conclude that spinach, with all its superfood nutrients, can successfully lower blood pressure.

Spinach has an impressively high iron count which is beneficial for regulating bouts of anemia. Anemia, which in many cases is caused by a lack of iron, is a condition where you lack adequate red blood cells to properly oxygenate your body’s tissues. Anemia can cause symptoms of weakness and fatigue. Although there are different types of anemia, one is caused by a lack of iron. Enter: spinach. Spinach, which is naturally high in iron can help reduce the risk of anemia as well as carry oxygen to one’s cells.

General Consensus: 2.5/5 and here is why. There are only about 10 studies that connect spinach intake to the treatment of anemia symptoms. What’s more, there’s some indication that the human body doesn’t absorb iron from leafy greens as well as it does from other sources such as red meat.

General Consensus: 2/5 and here is why. While it’s true that the vitamin K1 in spinach can help with the formation of blood clots, it could also have an obtrusive effect on pharmaceutical blood thinners, so caution is advised.

General Consensus: 2/5 and here is why. Although some studies suggest that spinach intake can reduce acne breakouts, just as many suggest that the iodine content in spinach may lead to acne. The research is therefore conflicting. 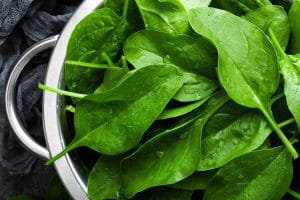