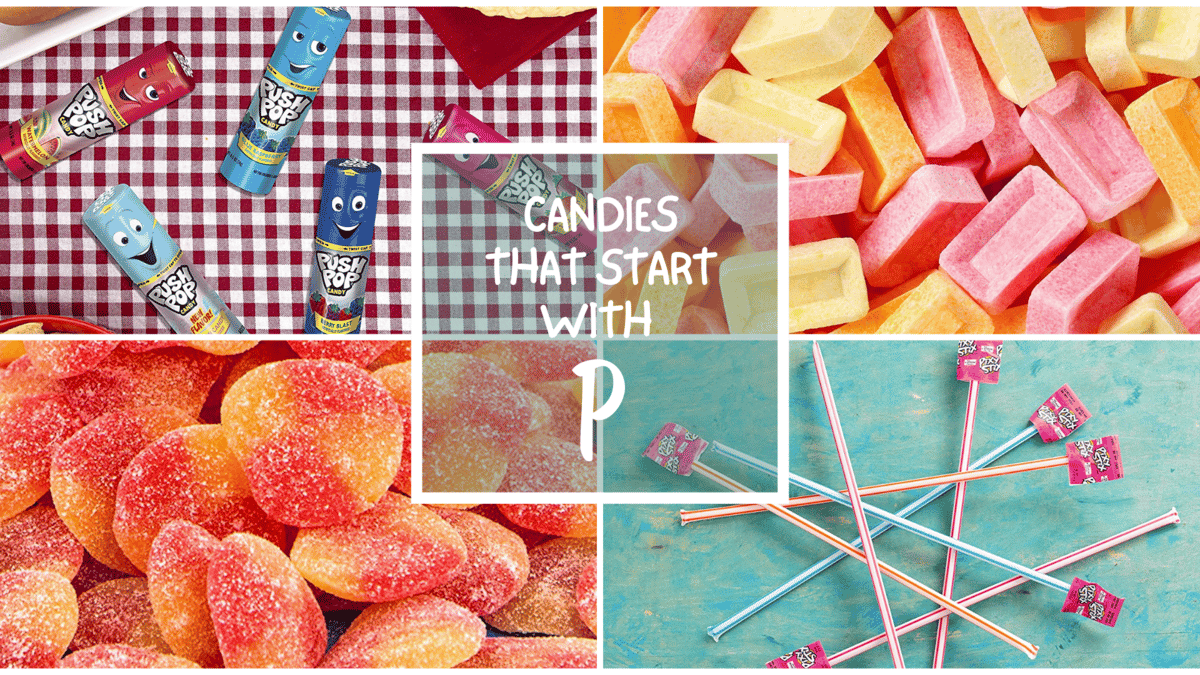 This pit stop on your journey through the candy alphabet is a good one. The P candies run the gamut from international sensations to pure Americana. With the obvious peanut candies shining like a beacon to fruit-flavored treats of yesteryear, the P candies are truly noteworthy. Take a look and see for yourself.

Though Payday candy bars were invented in 1932 by the Hollywood Candy Company in Minnesota, they’ve been manufactured by Hersheyland since 1996. Payday was sold as a meal replacement during the Great Depression because they were packed with protein and rather filling. Paydays are a sweet, nutty confection that is unique and delicious. Unlike many peanut bars that are covered in a layer of chocolate, peanuts, not chocolate, are the star of this bar. Notably, Paydays are sweet and sticky bars made of peanuts and caramel.

Payday bars come in standard-sized, king-size, and snack-size bars. Additionally, there is also a chocolate-covered variety that’s quite popular. Interestingly, Payday got its name because factory workers couldn’t think of a name for the bar and they happened to be brainstorming on payday. Of note, the main ingredients in Payday bars are peanuts, corn syrup, sugar, and skim milk A serving of Payday has 150 calories, eight grams of fat, 12 grams of sugar, one gram of dietary fiber, and four grams of protein. Best of all, Paydays are both gluten-free and kosher.

Peaches are a gummy candy that was first invented by Haribo in 1922. Although other companies manufacture Peaches today, they continue to be produced by Haribo as well. Peaches are peach-shaped jelly candies that are soft and fruity; the beautiful color of Peaches is a gradient of light and dark oranges. Each delicious Peach is covered in sweet granulated sugar. Moreover, Peaches are a summertime favorite that exudes the sweet peachy flavor of the season.

Peaches are an American favorite and can be easily found in most candy stores and supermarkets. Haribo Peaches are made with the usual gummy-candy ingredients including sugar, glucose syrup, citric acid, and a combination of artificial and natural flavors. Lastly, Peaches have 100 calories, 20 grams of sugar, and two grams of protein in every four pieces.

Peeps are a colorful line of marshmallow chicks and bunnies popular in the Spring and at Easter. Peeps were introduced by Just Born Quality Confections in 1953 and have been a hit ever since. Today, they continue to be manufactured by Just Born in Bethlehem, Pennsylvania. Peeps are a childhood favorite treat; not only are they fun to eat, but they’re also fun to play with. Have you ever microwaved a Peep to see it quadruple in size? It’s a super fun (yet messy) party trick. Nevertheless, Peeps are bunny or bird-shaped marshmallows that are coated in colorful sugar; some of the bright colors Peeps come in include yellow, pink, and blue.

Since their invention, Peeps have introduced new flavors and colors; additional Peeps varieties include fruit punch in red, chocolate pudding in brown, sour watermelon in pink, and party cake in a speckled aesthetic. Furthermore, Peeps now come in flavors and colors for other holidays such as Halloween and Christmas. Of note, Peeps are made of sugar, corn syrup, and gelatin while a five-chick serving has 140 calories and 30 grams of sugar.

Pez candy got its start as a fine peppermint packaged in tins in the 1920s. Today, Pez is known as the popular and cutesy candy dispenser that features recognizable pop-culture characters. Pez dispensers are refillable, plastic, and collectible. Some of the icons that have donned Pez dispensers over the years include Bugs Bunny, Mario & Luigi, Peppa Pig, Lion King characters, and so many others. Though a Pez dispenser typically comes with a roll of candies, they’re also sold separately so that you can use your dispenser infinitely.

Speaking of the candy, Pez candy is powdery, bite-sized, rectangular tablets that come in a stacked sleeve which easily slides into a dispenser. The candies are sweet and tart and come in an array of colors and flavors such as grape, lemon, cherry, and orange to name a few. The texture of Pez candies is akin to that of Smarties. The primary ingredients in Pez candies are sugar, corn syrup, palm oil, and both natural and artificial flavors. Thankfully, Pez is peanut-, tree nut-, and gluten-free. Finally, a generous one-roll serving of Pez has 35 calories and nine grams of sugar.

Pixy Stix is a fruit-flavored, powdered candy that’s packaged in a striped paper straw. Pixy Stix was invented in 1959 by Frutoli, Inc. in St. Louis, Missouri. Today Pixy Stix are manufactured by The Ferrara Candy Company. Pixy Stix come in the following fruit flavors: grape, cherry, orange, and Maui Punch; each powder-filled straw contains a colorful tart candy that’s as fun to eat as it is tasty. Pixy Stix are easily consumed by tearing off the paper top of the straw and pouring the powder into your mouth. Of note, Pixy Stix are made with Dextrose, citric acid, and natural flavors. A serving size of seven Pixy Stix has 60 calories and 15 grams of sugar.

Polos are the UK’s answer to LifeSaver breath mints. Polo Mints, which were invented in 1948 are now manufactured and distributed by Nestle Confectionery. Polo mints were introduced in a cool and refreshing mint flavor but are now available in a range of flavors such as spearmint and fruit. Similar to LifeSavers, Polos are packaged in foil rolls of 24 and they’re also ring-shaped.

Though Polos are a strong breath mint, they’re also noted for their sweet undertones, making them as enjoyable as they are effective. Polos are made with sugar, glucose, syrup, modified starch, and mint oils. Finally, one Polo mint has six calories and about two grams of sugar.

Pop Rocks are a novelty candy that was invented in 1975 by a food scientist working on a new soda recipe. Essentially, the fizzy candy was a happy mistake. Today, Pop Rocks are manufactured by Zeta Espacial S.A., a food manufacturer based in Spain. Pop Rocks are artificially flavored, crystal-like candies that come in small paper envelopes. When poured into your mouth, Pop Rocks pop and fizz before reducing. It’s the unique pressurization with carbon dioxide during the processing of Pop Rocks that yields the fizzy effect. If you haven’t tried these fun popping candies, you haven’t lived!

Pop Rocks come in a wide range of colors and flavors including grape, strawberry, green apple, bubble gum, cotton candy, and many others. The main ingredients in Pop Rocks include sugar, lactose, corn syrup, artificial flavors, and carbon dioxide. Lastly, a single pouch of Pop Rocks contains 34 calories and eight grams of sugar.

Push Pops, which hit the streets in 1986, are novelty lollipops manufactured by Topps in Taiwan. The fun of Push Pops is the packaging; the cylindrical hard candy comes in a colorful plastic tube and from the underside of the tube, you push the pop into eating action. Unlike traditional lollipops, Push Pops can recede into the tube and the cap can be replaced so you can save it for another time.

From the greatest of American novelty candies to some of the sweetest confections of your childhood, the P candies pack a punch. With fruity, nutty, sweet, and sour all accounted for, there’s truly something for every palette on the list of P candies.