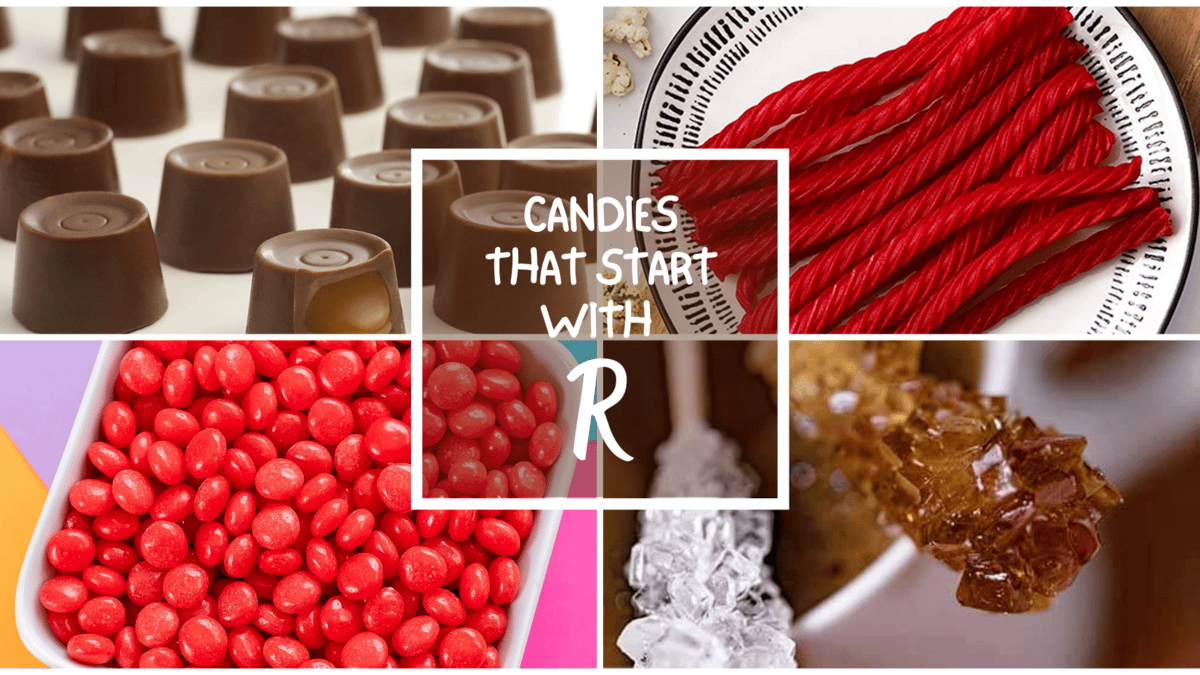 The list of R candies is a good one! Packed with sweet treats that run the gamut from chocolate to chewy and lollipops to gums, there’s something for everyone on this list. Notably, raisins, peanut butter, and rainbow varieties all make cameos on the R list. Take a look at some of the best the letter R has to offer.

Invented by Leaf Confectionery in 1940, Rain-Blo is a brand of American bubble gum. Today, the Ferrara Candy Company produces this rainbow-colored, fruity gum. Rain-Blo are gumballs in shiny bright colors; the inside of each gumball has a blast of fruit-flavored yumminess. The flavor on the inside of each gumball is said to match the color on the outside. Rain-Blo gumballs come in two size varieties, a regular-sized one and a jumbo one dubbed Jum-Blo.

Rain-Blo gumballs come in orange, red, yellow, green, purple, and white so whatever ball you choose, the inside and thus your bubble will be the same color. This static-throughout coloring of Rain-Blo balls is unique to this brand. Rain-Blo gumballs are packaged in a sleeve of 10 balls or tubs of individually-wrapped balls. They also come in tubs of unwrapped balls perfect for filling gumball machines. Rain-Blo gumballs are made with the usual gum ingredients including sugar, dextrose, corn syrup, gum base, and citric acid. Lastly, Rain-Blo gumballs have five calories and four grams of sugar in every piece.

Raisinets were first manufactured by Blumenthal Chocolate Factory of Philadelphia in 1927. Though the brand has changed hands a few times over the years, Raisinets are now manufactured by Nestle. Raisinets are sweet and healthy sun-ripened raisins covered in a layer of rich milk chocolate. Other varieties of Raisinets include chocolate-covered cranberries and dark chocolate raisins. Raisinets are packaged in shareable cardboard boxes and popularly sold in movie theaters. The vibrant yellow packaging is iconically recognizable. In fact, similar to Goobers, movie-goers love to mix their Raisinets into a big bag of buttery popcorn.

Unlike many chocolate-covered candies, Raisinets are loaded with antioxidants and less fat than most candy treats. Raisinets are made with milk chocolate, raisins, sugar, tapioca dextrin, and confectioner’s glaze. A serving of Raisinets contains 190 calories, eight grams of fat, 27 grams of sugar, two grams of protein, and one gram of dietary fiber.

Razzles is a hybrid candy-gum confection that was invented in 1966; today, Razzles are manufactured by Tootsie Roll Industries. Originally, Razzles were introduced as round, bite-sized candies in a raspberry-only flavor. Later, Razzles became a blended fruity mix of chewy candies that when well-masticated become chewing gum. Razzles are packaged in shareable cardboard boxes in the original fruit blend as well as tropical and sour flavors. Additionally, Razzles has a Fizzles spinoff that pops in your mouth as you chew.

The primary ingredients in Razzles include gum base, sugar, citric acid, and artificial flavors. Every two pieces of Razzles have 15 calories and three grams of sugar. If allergens are a concern, the manufacturer warns that soy may be present in Razzlez.

These spicy red candies were invented by the Ferrara Candy Company in the early 1930s. Red Hots are small, pill-sized cinnamon candies; they’re on the harder side and are fun to eat by the handful if you can handle the heat. Red Hots, besides being a tasty confection, are also popularly used to decorate cakes and gingerbread houses. Red Hots are packaged in small boxes and by the bag but no matter the package its aesthetic is the same; the packaging is consistently yellow with red flames, indicative of the heat these candies pack, in the background.

Besides the original, hard candies, Red Hots also come in a chewy variety. Red Hots are made with sugar, corn syrup, corn starch, confectioner’s glaze, and both natural and artificial flavors. Finally, a serving of about 21 pieces has 100 calories and 21 grams of sugar.

Produced by the American Licorice Company in Union City, California, Red Vines were invented in the 1920s. Although Red Vines are sometimes referred to as a type of licorice, that’s a misnomer; there is, in fact, zero traces of licorice in Red Vines. Red Vines are cherry-flavored, chewy candies that come in sticks of interwoven “vines.” Red Vines essentially look just like Twizzlers. The fun of Red Vines is peeling away each of the vines to enjoy individually. Today, Red Vines are available in a variety of flavors including the original cherry as well as black licorice, cinnamon, and grape.

Red Vines also come in various packaging methods including boxes, bags, and tubs; the tubs are perfect for a party or large group. The primary ingredients in Red Vines are corn syrup, wheat flour, and citric acid. A serving of Red Vines has 100 calories, 16 grams of sugar, and one gram of protein. Best of all, Red Vines are certified kosher.

Although Reese’s Pieces are invented as a spinoff of Reese’s Peanut Butter Cups, they have no chocolate. Reese’s Pieces are made of vegetable oil, corn syrup, peanuts, and confectioner’s glaze while each serving contains 200 calories, nine grams of fat, 21 grams of sugar, five grams of protein, and two grams of dietary fiber.

Riesen is a German candy that was invented in the 1930s by a confectioner named August Storck. In Germany, Riesen is known for being the country’s first branded candy of all time. Riesens are bite-sized, rich, and intensely chocolate candies that are beloved around the world. A Riesen is a chocolate-flavored, chewy caramel enrobed in a thick layer of decadent dark chocolate. The effect is chocolate on chocolate with a subtly caramel undertone.

Riesens are individually twist-wrapped in a brown wax wrapper and then packaged in shareable bags. The rich candy coating and thick caramel interior make for a long-lasting candy experience. Of note, Riesens are primarily made with glucose syrup, chocolate, sugar, whey, and condensed skim milk. A three-piece serving of Riesen contains 120 calories, five grams of fat, 12 grams of sugar, and one gram of protein. Lastly, if allergens are a concern, beware that Riesens contain milk and soy and they’re also processed in a facility with nuts.

Developed in the late 70s by a candy engineer at the Topps Company, Ring Pops were developed as a ploy to get the candy maker’s daughter to stop sucking her thumb. Trading one bad habit for another, Ring Pops were marketed as a habit-breaker and well-received by the masses. Ring Pops are wearable candy that closely resembles a baby’s pacifier. They are hard lollipop candies in the shape of a large gemstone set atop a plastic ring.

Ring Pops come in an array of colors and flavors; besides the original fruity flavors, Ring Pops are now available in tropical, twisted, gummy, sour, and tongue-painting varieties. The primary ingredients in Ring Pops are sugar, corn syrup, lactic acid, sodium lactate, and various artificial flavors that depend on the flavor of the pop. Finally, Ring Pops contain 40 calories and five grams of sugar per serving.

In the US, there is only one manufacturer of Rock Candy: New York-based Richardson Brands. Rock Candy are crystalized sugar formations mounted on a wooden lollipop stick. Though it is mounted to a stick, Rock Candy has sharp, uneven crystals that prevent it from being sucked like a standard lollipop. Rock Candy is best, and most safely, eaten in small nibbles. The crystalline texture and overly sweet taste of Rock Candy make them an enjoyable treat. Interestingly, Rock Candy is often served alongside hot coffee drinks as a pretty sweetener.

Rock Candy wands come in a variety of beautiful colors such as orange, green, and purple and flavors such as blue raspberry, cherry, strawberry, grape, and watermelon. Rock Candy comes individually wrapped in clear, cellophane wrappers. They can be purchased in bulk by specific color making them a perfect treat for a candy bar or themed party. Rock Candy is made with just sugar and water and is kosher, gluten-free, and non-GMO. Lastly, a single Rock Candy has zero calories or fat and less than one gram of sugar.

First invented in England in 1937, Rolos are a delicious caramel candy that is now manufactured in the US by The Hershey Company. Rolos are bite-sized niblets that are filled with a creamy caramel center and a rich milk chocolate coating. Rolos are packaged in foil rolls of eight pieces. Besides this standard packaging, Rolos also come in individually, foil-wrapped bags as well as unwrapped bags.

Runts first hit candy stores in the early 1980s. Runts are hard and crunchy, fruit-shaped candies that come in a medley of colors and flavors. Though they were manufactured by Nestle for a time, Runts are now made by the Ferrara Candy Company. Runts come in five color/flavor combinations: a green lime, a yellow banana, a purple grape, an orange, and a red strawberry.

Though Runts can be purchased in boxes of loose candies, they’re also commonly found in candy dispensers (the kind you stick a quarter in and get a handful of candy). Runts are made with dextrose, malic acid, and corn syrup among other ingredients. Finally, a serving of Runts contains 60 calories and 13 grams of sugar.

Did you recognize some old-time favorites or did a new treat or two catch your eye? Whether you’re here for candy nostalgia or inspiration, the R candies have your back. Which will you be looking out for in your local candy aisle?