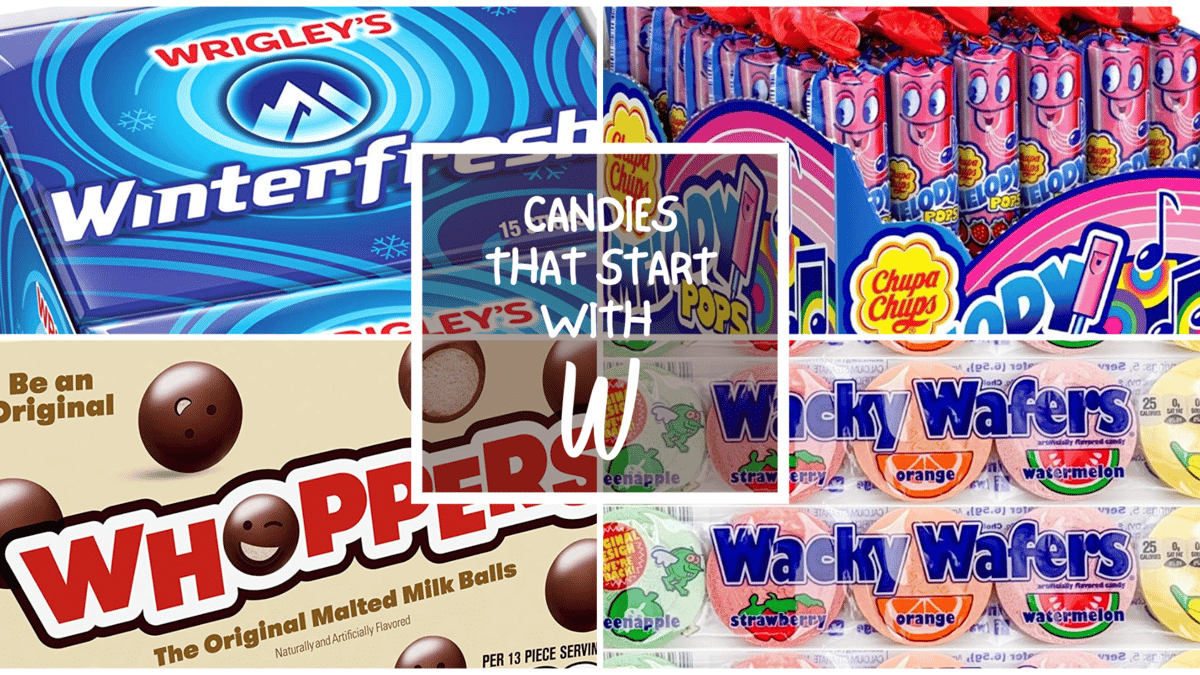 The W candies are a hard-hitting bunch of smash hits. From old-timey favorites that your grandma likely loved to movie-themed chocolate bars and extremely sour candies the likes of which childhood challenges are made to musical lollipops, the W candies bring the heat. Let’s jump in!

Invented in the mid-970s, Wacky Wafers are a fruity candy manufactured by Leaf Brands, LLC. Roughly the size and shape of an American half-dollar, Wacky Wafers are tablet-shaped wafers with a chalky texture. Wacky Wafers come in five colors and flavors, namely banana, green apple, watermelon, orange, and strawberry. A pack of Wacky Wafers comes with one of each flavor; they’re packed in a clear cellophane wrapper.

Over the years, Leaf Brands, LLC has dabbled with other size and flavor varieties and they were even altogether discontinued for a time. Wacky Wafers were finally reintroduced in their original format, which is the only variety they’re currently available in, in 2017. Notably, the primary ingredients in Wacky Wafers are dextrose, malic acid, calcium stearate, and both natural and artificial flavors. Lastly, one Wacky Wafer has 25 calories and six grams of sugar.

Created in the mid-70s in Taiwan, Warheads weren’t imported to the US until 1993. Once they arrived in the US, 90s kids had a blast challenging each other and themselves to games of “who could handle” a Warhead. So what’s a Warhead? They sound hostile, right? Well, they are! Warheads are a type of hard candy with intensely sour, barely-palatable flavors. Today, Warheads are manufactured in Australia by Impact Confections.

Warheads come in individually-wrapped, round, bite-sized candies. They’re available in many flavors but each is an extremely sour version of that flavor. Some of the flavors Warheads are available in include watermelon, green apple, and blue raspberry to name a few. Besides the hard candies, other Warheads varieties include Galactic Mix Cubes, Sour Jelly Beans, Ooze Chews, and Lil’ Worms. The main ingredients in the original Warheads hard candies are corn syrup, sugar, malic acid, and citric acid among other ingredients. Finally, a single Warhead contains 11 calories and two grams of sugar.

Manufactured by Adams & Brooks, Inc., the Whirly Pop is a jumbo lollipop that’s closely related to the Unicorn Pop. Whirly Pops are a popular carnival and fair treat. The whimsy of their size, as well as the radiant rainbow colors, are eye-catching and irresistible to children. Incredibly, Whirly Pops measure more than five inches in diameter.

A Whirly Pop is a large, disc-shaped lollipop in a rainbow, swirly pattern. Besides the original, rainbow color, Whirly Pops also come in two-toned colors of white and blue, purple, yellow, and red; these are perfect for themed party favors or on candy buffets. The main ingredients in a Whirly Pop are sugar, corn syrup, citric acid, and both natural and artificial flavors while a whole lollipop contains about 180 calories and 35 grams of sugar.

Whistle Pops is a lollipop brand that was invented in the 1970s by the Spangler Candy Company. In some countries, they’re called Melody Pops; nevertheless, a Whistle Pop is both an instrument and a sweet treat in one. A fun and unusual type of lollipop, Whistle Pops are flute-shaped, hard candies that can be blown into to play a melody. Today, Whistle Pops are manufactured by Chupa Chups, a confectioner that specializes in lollipops.

Children are drawn to these unique candies more for the fun than the taste of Whistle Pops. Speaking of taste, Whistle Pops have been available in many fruity flavors including blue raspberry, watermelon, strawberry, green apple, and coffee. The main ingredients in Whistle Pops include sugar, glucose syrup, citric acid, malic acid, and flavoring. A single Whistle Pop has 54 calories and 14 grams of sugar.

Invented in 1939 and first named Giants, Whoppers are chocolate-covered malt balls that, frankly, are addicting. Though Whoppers have changed hands a few times, today, they are manufactured by The Hershey Company. Whoppers have classically been packaged in both cardboard, individual boxes and shareable, 12-ounce milk cartons. Moreover, Whoppers also come in mini boxes, three-piece sleeves, and stand-up bags.

Whoppers are bite-sized, crunchy balls with a dry malt center that’s covered in a thin layer of milk chocolate. Furthermore, Whoppers are a popular ingredient in baked goods such as Whop-Pie and Old Fashioned Malted Cake; they’re also a popular movie theater candy. The main ingredients in Whoppers are sugar, corn syrup, whey, and malted milk. Finally, a serving of Whoppers contains 140 calories, five grams of fat, and 17 grams of sugar.

Launched in 1981 by the Cadbury Company in the UK, Wispa is a light and aerated chocolate bar. Devised as a competitor to the Nestle Aero bar, the Wispa is full of tiny air bubbles between its tasty chocolate layers. Wispa comes in a standard-size candy bar enveloped in an iconic purple Cadbury wrapper. Though the chocolate in a Wispa bar is made using the same ingredients as a Cadbury Dairy Milk bar, the science of its creation gives it a flakier texture than its counterpart.

Essentially, a Wispa bar is the same composition as Dairy Milk but the processing methods give it a different texture and taste. The primary ingredients in a Wispa bar are milk, sugar, cocoa butter, cocoa mass, and vegetable fats. Lastly, one Wispa bar contains 140 calories, eight grams of fat, 13 grams of sugar, and one gram of protein.

Wazoo was a candy bar developed by Topps in 2009. Unlike a typical candy bar, Wazoo was a colorful, creamy, and tangy taffy bar topped with bright, crunchy sprinkles. Unfortunately, the company charged with making Wazoo bars went bankrupt shortly thereafter, marking the end of the Wazoo bar. As a result of its discontinuation, it’s impossible to find Wazoo bars or any information about their ingredients or nutrition facts.

Invented in 1976 in Chicago by Breakers Confections, Wonka Bars are a type of graham cracker chocolate bar. In 1988, Nestle purchased the rights to the Wonka Bar and manufactured them for many years thereafter. The Wonka Bar is inspired by the Roald Dahl story “Charlie and The Chocolate Factory” which figures the bar as a significant plot detail. As a marketing ploy for a new Wonka film in 2005, Nestle added golden tickets to a handful of Wonka Bars; winners won big cash prizes similar to the movie’s plot. Unfortunately, Nestle discontinued Wonka Bars in 2010. As a result, nutritional information isn’t easily accessible.

Which of these wildly popular and whimsical candies will you be on the lookout for next time you land in a candy aisle? Whether you fancy rich chocolate treats or long-lasting hard candies, the W list of candies has something for every taste.