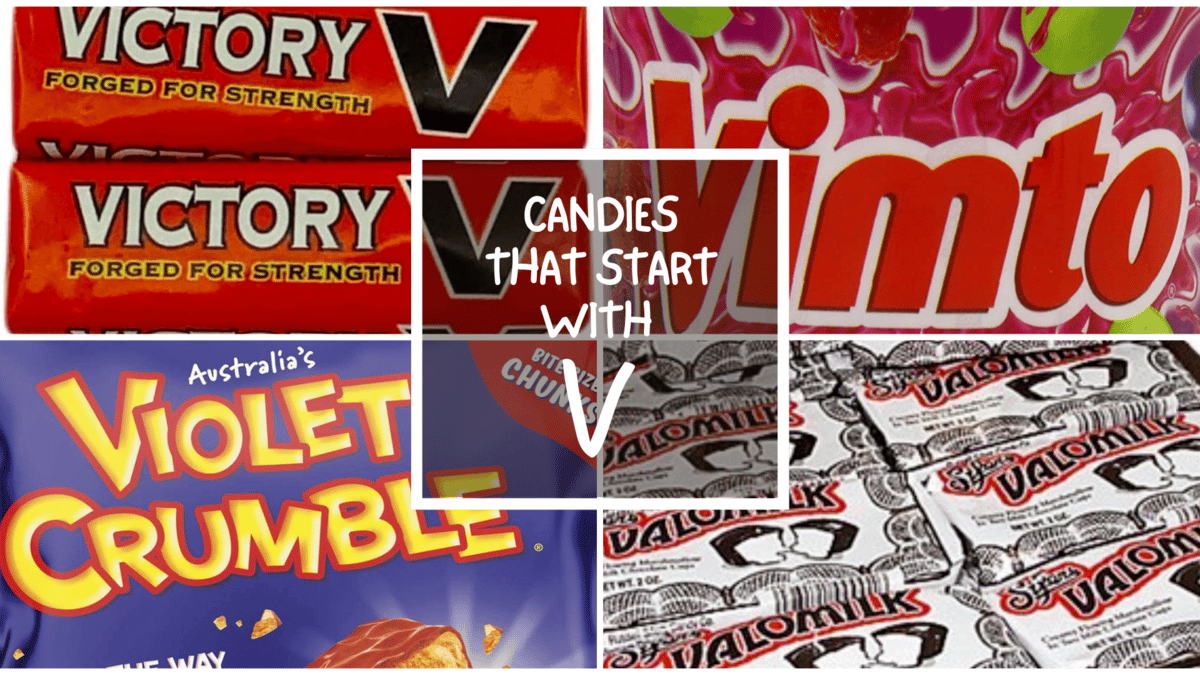 The V candies are an unusual bunch, to say the least. Not only are V candies few and far between, but a third of them were designed to be health tonics. Besides the health tonics, there are only a few chocolate varieties and a few mints with little else in between. So if you’re looking for the most unexpected candies, the V list is your list.

Launched in the late 70s in the US by Ragold, Inc., Velamints are a popular type of sugar-free breath mint. Although the original Velamints were purely peppermint-flavored hard candies, today, Ragold, Inc. produces Velamint candies and gums in a wide variety of flavors. Today, the mints are available in bold flavors such as Spearmint, Cool Lemon, Cool Watermelon, Blood Orange, and Coconut Lime to name a few. Some of the fun gum flavors include Peppermint, Spearmint, and Cool Watermelon.

Both the mint and gum varieties are packaged in cute tins that slide open at the top. Each tin contains a generous 28 mints that are sweetened with Stevia so they’re truly sugar-free. Additionally, the original, peppermint flavor Velamints are made with sorbitol and natural flavorings. Finally, Velamints contain just two calories per one-mint serving.

Invented in the UK in 1864, Victory V candies were designed as a therapeutic lozenge. Each Victory V was handmade to perfection to ensure the perfect makeup of the ingredients. Used to treat sinus, throat, and gastrointestinal issues as well as constipation, Victory Vs are a licorice-flavored hard candy. Today, Victory V is manufactured by Ernest Jackson & Co.Victory V lozenges come in sleeves of individually-wrapped candies that are said to have a warming effect when consumed. The main ingredients in Victory V lozenges are sugar, acacia gum, glucose syrup, and linseed oil. Each lozenge contains just nine calories.

Another candy that was once marketed as a therapeutic lozenge, Vimto was invented in drink form in 1908. Today, Vimto is manufactured by Refresco in the UK and although it was originally only available in a cordial form, it now comes in many candy forms. Vimto was historically used as a gastrointestinal tonic but today is popularly used during Ramadan to break fast giving observers a quick boost of energy.

Today, Vimto comes in Bon Bon, Jelly Bean, Flying Saucer, and Candy Floss, the most popular of Vimto candy varieties. Vimto Candy Floss is a fluffy, shareable type of cotton candy that comes packaged in a fun-to-carry bucket. Vimto Candy Floss is made with the “top secret Vimto flavor” which tastes like a combination of grapes, raspberries, and blackcurrants. The primary ingredients in Vimto Candy Floss are sugar, citric acid, and natural fruit flavors. Ultimately, a serving of Vimto Candy Floss has 202 calories and 49 grams of sugar.

Violet Crumble is an Australian chocolate bar that hit Aussie candy aisles in 1913. Violet Crumble is a popular candy in Hawaii and Hong Kong but also ships to the US. Named for the candy maker’s wife whose favorite color was purple and whose most-loved flower was violet, Violet Crumbles come wrapped in a purple foil wrapper. Violet Crumble bars have a thick, honeycomb toffee center that’s enrobed in a generous layer of milk chocolate.

Although Violet Crumble was originally only available in candy bar form, today it comes in bite-sized cubes and nuggets too. Additionally, caramel and dark chocolate spinoff varieties are popular now as well. Violet Crumble is made with compound chocolate, cocoa powder, salt, honeycomb, and glucose syrup among other ingredients. Finally, a standard-sized Violet Crumble bar has 236 calories, eight grams of fat, 33 grams of sugar, and one gram of protein.

Created in 1934 by Charles Howard, Violet Mints are a type of chalky, floral candy that you either love or hate. Violet Mints continue to be manufactured by C. Howard Company, Inc. and are popularly found in gas stations (among other places) across the US. Violet Mints are squares that are individually wrapped in paper and packaged in purple, aluminum sleeves of 15 candies.

Invented in 1931 in Kansas City, Missouri, Valomilk candy cups are a sweet confection that is similar in shape and size to Reese’s Peanut Butter Cups. Valomilk is still made in Kansas today by a manufacturer called Russell Sifers Candy. This fifth-generation, family-owned confectioner is a one-trick pony in that Valomilk is the only candy they produce. But what is Valomilk? If you know, you know. Valomilks are milk chocolate candy cups filled with a liquid marshmallow filling. The filling is sweet, white, and was actually created by happenstance; essentially, a mistake made in another candy’s recipe led to the invention of Vaolmilk.

Valomilk is a regional Midwestern treat that can be easily found in states surrounding Missouri, beyond that, however, your best bet is to buy them from online retailers. Valomilk comes packaged in an old-timey wrapper with two generous-sized cups per package. Of note, Valomilk got its name from its three main ingredients: vanilla, marshmallow, and milk. Lastly, one package of Valomilk contains 280 calories, 13 grams of fat, 26 grams of sugar, and two grams of protein.

Although they’re no longer manufactured, Volcano rocks were a popular candy produced by The Willy Wonka Candy Company throughout the 70s and 80s. Volcano Rocks were individual pieces of candy that resembled, you guessed it, a lava rock. The surface of a Volcano Rock was uneven and gravelly. They were packaged in small cardboard boxes similar to Nerds. Because Volcano Rocks were discontinued long before the advent of the internet, acquiring information about ingredients and nutrition is next to impossible.

By far, the V candies are the most curious group. From foreign treats to discontinued ones and health remedies to floral flavors there’s not much else. If you’ve come to find the most out-of-the-ordinary candies of both today and yesteryear, this short yet interesting list of confections surely fits the bill.