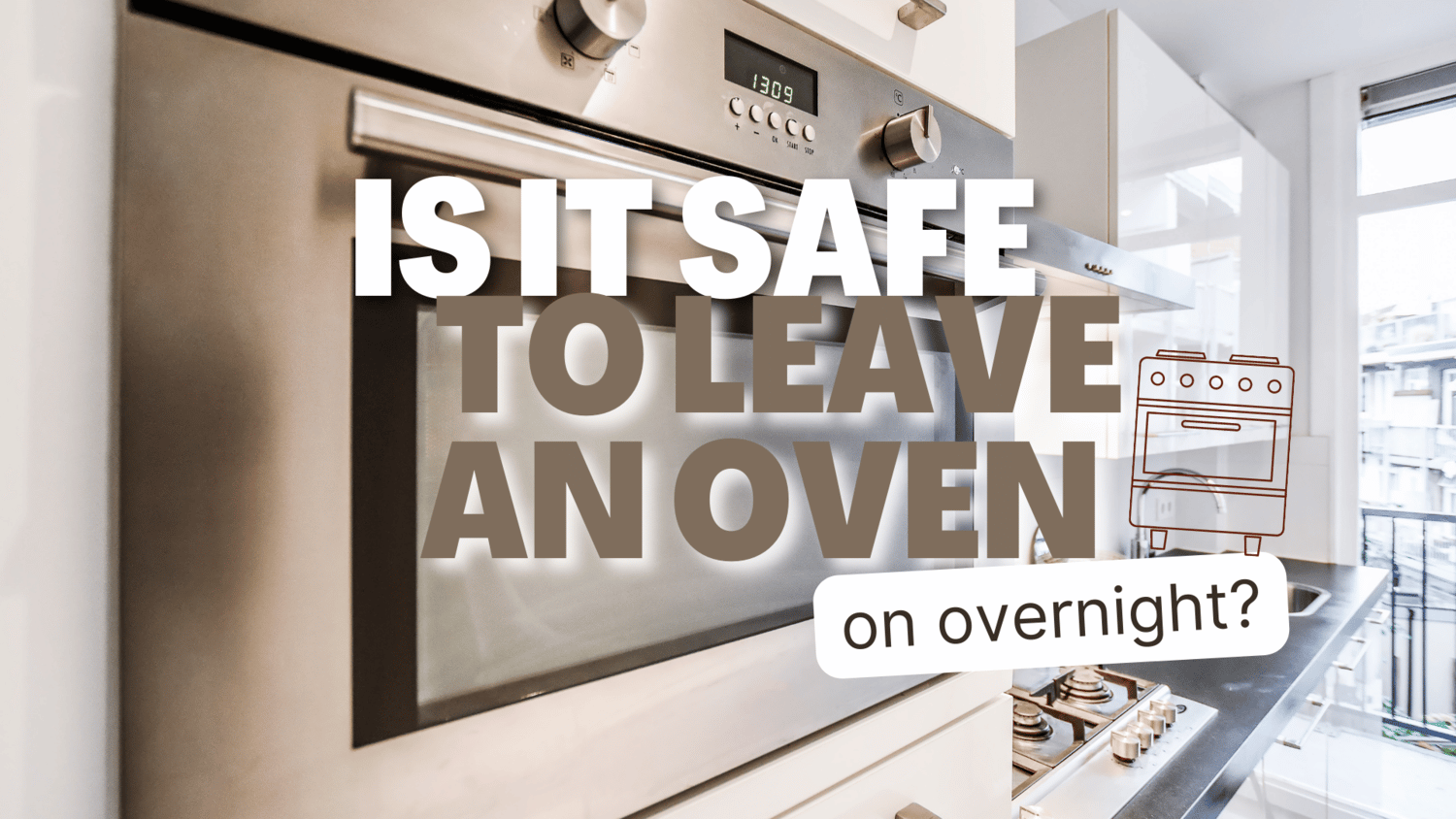 Whether or not it’s safe to leave an oven on overnight depends entirely on the temperature it’ll be running at, the type of oven in question, and the basic environment it’s in. Leaving an oven on overnight shouldn’t damage it at all, but there are, of course, risks. Just because a brand new oven is designed to sustain prolonged baking, this doesn’t mean that an old oven will hold up the same. One can’t run an oven indefinitely, either. We’ll take you through a complete look at everything you need to consider before deciding to leave your oven on overnight.

Why Leaving An Oven On Overnight Is Relatively Safe

An oven is specifically designed to generate, contain and sustain heat at fixed temperatures for extended periods of time. It is not uncommon for a baker to bake all day, albeit only every now and then when a standard consumer-grade oven is in use and not a commercial appliance. Similarly, many roasts will take up to half a day of roasting before it’s ready. Manufacturers also know that many users use their ovens at very low temperatures for a very long period of time to dehydrate food.

Sabbath mode that’s built into many leading ovens shows that most units are made to run for far longer than twelve hours at a time. According to Jewish law, formally known as Halakha, food may not be prepared on the Sabbath, but food that has already been cooked beforehand may be kept warm. Cooked food is placed into the oven at sunset on Friday and then removed hot and ready to eat at sundown on Saturday without anyone needing to flip a switch or touch a button.

Certain ovens offer a self-clean mode that runs the oven at 800-1,000°F for up to six hours, effectively burning off any residue from spatters or baking without the need for any chemicals. Moreover, as one can clearly see, ovens are meant to withstand ultra-high heat and will seldomly incur any damage from overnight use.

Leave Your Oven On But Never Unattended

The National Fire Protection Association (NFPA) declared unattended cooking to be the primary factor behind cooking fires and the fatalities resulting. Between 2014 and 2018, 53% of all cooking fire deaths resulted from equipment left unattended, with the heat source being placed too close to combustibles coming second at 15%. Roughly 31% of all cooking fires resulted from unattended equipment, with the placement of the heat source claiming 9% of all fires. If you’re going to be leaving your oven on, make sure that you check it intermittently as in every hour or half hour to be on the safe side.

The Dangers Of Leaving An Oven On Overnight

A fully functional oven should have no problem running overnight as long as it is checked on within six hours or so. However, there are certain potential dangers that cooks should be aware of.

A very dirty oven that’s been running for a considerable period may ignite due to the buildup of grease inside. If the bottom or sides have a buildup of grease and/or the grease tray is dirty, there’s a big chance that your oven will start a kitchen fire if left to run at a high heat overnight.

Old unstable ovens, such as those with physical damage, often put out far higher levels of heat than they’re meant to when fully functional. If your oven is cracked or runs with an exceedingly high exterior temperature, then using it overnight may cause a string of unintended consequences. From igniting or damaging nearby appliances or other kitchen equipment to outright failing under the strain of running for so long, unpredictable old ovens should always be monitored when used over an extended period.

Kitchen Fire From Nearby Combustibles

A reputable oven in perfect working order puts out around 200°F even when heat loss is at its highest. This is why oven manufacturers recommend, and cabinet makers allow a 15″ gap around the oven itself. If you’re going to be running your oven overnight, make sure it’s positioned away from combustibles in an area where nothing can be damaged from the radiant heat. For most, the standard position of an oven fulfills these roles, but please do consider the spacing if you haven’t baked for long periods at a time before.

Unless you know your oven very well, it is extremely hard to gauge the results of dehydrating, baking, or roasting many hours into the process. More often than not, food comes out over-dried, baked to a crisp, or roasted bone-dry if you aren’t completely familiar with whatever you’re cooking and the heat your oven puts out over a prolonged period. Just because

Precautions To Consider Before Leaving An Oven On

Minimize the risk of running your oven overnight by keeping these precautionary considerations in mind.

As mentioned, older ovens only used for short periods at a time can be unpredictable and should be monitored frequently while cooking overnight to prevent mishaps.

Regular cleaning prevents a buildup of grease and grime, which significantly lowers the chance of a fire igniting when using an oven overnight. Clean your oven regularly, and it’ll both last longer and run safer.

Some ovens will automatically switch off after four to six hours. If your oven has a safety shut-off and you need longer, you’ll either have to employ an override which is seldomly offered, or, as is the case for most, simply turn the oven on again and let it run for the remainder of the duration needed.

The heat your oven puts out around the immediate area of its placement during an hour or two’s worth of cooking is much lower than when running overnight, so always ensure there’s nothing combustible or damaged in any way placed nearby.

Those who want total peace of mind should consider fitting a smoke detector in the vicinity of their oven so that there’s absolutely no way of missing an accidental kitchen fire. Take care to position the smoke detector at least five feet away from the oven to prevent accident smoke alarms. Another option is fitting a heat detector in the kitchen instead, which is a far more reliable option that’ll warn that a room is heating up before an actual fire starts.

Here are all the answers to any lingering questions you may still have about leaving an oven on overnight.

Can I Leave The Oven On Overnight For Heat?

Kitchen ovens should not be used to heat homes regardless of which type is in question, and no oven should ever be left completely unattended. Other than costing far more than the conventional heater to run while offering poor heat dispersion, an unattended stove for any extended period is a fire hazard. Additionally, gas stoves are likely to fill the kitchen and adjacent areas with methane and harmful carbon monoxide, especially when used with inadequate ventilation over a prolonged period. The small amount of heat radiated will only make a negligible difference to the warmth of the room and most definitely does not warrant the risks.

How Long Is It Safe To Leave An Oven On For?

The longest that one should run an oven without giving it a break to cool down is about twelve hours. In fact, the vast majority of stoves switch off automatically once twelve hours have elapsed. Rather than forcing the heating element to function for longer than manufacturers recommend, rather allow the oven to stand for at least an hour before starting it up for another extended cycle again. With this being said, a standard kitchen oven is well suited to running for a full day at a time, given the gap between cycles.

Will An Oven Shut Itself Off?

The vast majority of ovens manufactured today will shut themselves down after twelve hours or when a particular unsafe temperature is reached, in the case of smart ovens. To gauge whether or not your oven has automatic shutdown built-in is to see whether it has a timer feature. Ovens with a timer will typically switch off by themselves after twelve hours.

How Much Does It Cost To Leave The Oven On All Night?

Assuming the US national average cost for electricity of 15 cents/kWh, and a stove wattage of 3200 watts, running an oven at maximum temperature overnight for eight hours would cost $3.84. The average gas stove running overnight at max heat at the national average of $12.21 per 1000 cubic feetworks out to around 32 cents per hour or $2.56 for the eight-hour run.

Why Would You Want To Leave An Oven On Overnight?

The only times that someone would want to leave an oven on overnight is when dehydrating at a low temperature or when performing an extended roast. Several cuts of meat call for a long, slow roast of up to twelve hours or, in the case of a very large roast but not limited to lamb shoulder, pork shoulder, pork leg, beef belly, and beef chuck roast. If you’re looking for the best alternative to pork shoulder, be sure to check out our post listing all the viable substitutes. Certain large roasts can even go for two or more hours longer. Another dangerous but common use which we strongly advise against is using the oven as a heat source.