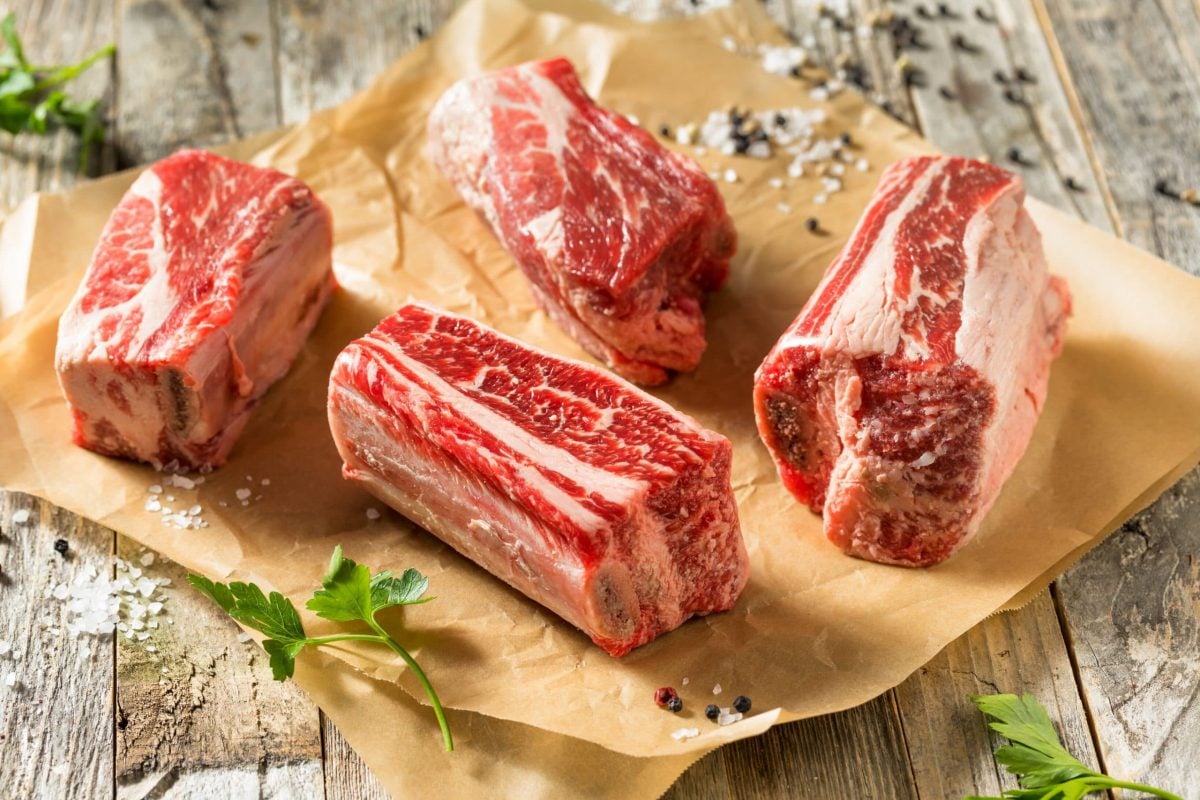 When a recipe calls for short ribs, but your local grocery is out of stock, you may have to find a suitable replacement. Worse, sometimes the supermarket only offers shoddy cuts of boney, gristly short ribs for ridiculous prices, and there’s no way you’re serving that. Luckily, there are options to substitute in place of good beef short ribs.

Substitutes for short ribs include other cuts of beef such as chuck roast, back ribs, flanken ribs, and beef shank. If you’re unable to eat beef, consider substituting with cuts from lamb. Cooking times may vary depending on the fat content of your chosen substitution.

The best replacements for short ribs will have a similar fat and meat content, replicate the taste as closely as possible, and avoid changing the recipe drastically. One excellent sub for traditional short ribs is the cut known as beef plate short ribs, which comes from right under the rib. This cut of meat looks similar to short rib but is quite a bit fattier, which gives it plenty of tender flavors.

When talking about short ribs, there are several different cuts you could use. These beef cuts are taken from the brisket, plate, chuck, and rib areas of beef cattle. Let’s dig into the different types of short ribs available for you to use in your cooking.

What Are Short Ribs?

Traditionally, short ribs are called that because they are only a section of the rib bone covered with meat. This meat can vary in how thick and fatty it is, depending on which section is used. Short ribs are very popular in many Asian dishes, but they are used in many recipes from across the world, with varying cuts determined by cooking style.

The cuts are known by different names, depending on how they are cut and from where they are cut.

Although most big store butchers don’t set apart which ribs come from the chuck, plate, or brisket, the price is usually a giveaway.

As you can see, depending on what cut of short rib your recipe calls for may help you decide what substitute will best suit you. If a recipe calls for short ribs cut from the rib area, you may be able to use other less expensive rib cuts for a similar result.

Short ribs are usually best cooked slowly or braising until the meat is tender enough almost to fall off the bone.

The least expensive cut of short ribs, the plate, is an excellent substitute for more expensive cuts. The higher fat content will keep the meat juicy, and you’ll be able to use similar cooking times and recipe ingredients. One thing you may choose to do is cut away the thick cap of fat on the top of the ribs before cooking.

Best for: Recipes calling for more expensive rib cuts, such as BBQs, where the meat needs to be on the bone. The higher fat content means you do not need quite as much marinade to really permeate the meat with flavor.

You might be familiar with chuck roast as the cut of meat used for a large Sunday roast beef. Chuck roast or shoulder steak is cut from the neck and shoulder of beef cattle and comes under a few other names.

You may know it as shoulder steak, boneless chuck roast, or chuck shoulder roast. Unlike ribs, where the bone adds to the flavor, chuck is boneless, and the rich taste comes from the higher fat content.

Chuck roast can be cut down into smaller sections and used as a replacement in Korean-style slow-cooked short rib recipes. The meat lends itself to long slow cooking times and braising.

Braising or pot-roasting is a slow cooking process where the meat is heated slowly in a tightly sealed vessel with only a little bit of oil. Unlike stewing, the meat is not cooked in a liquid.

Chuck roast tends to be cheaper than ribs and has a rich beefy flavor. When cut into large cubes, it makes an excellent substitute.

Best for: Slow-cooker recipes such as slow-cooker Korean short ribs and recipes that require braising.

A very economical cut of beef, shank comes from the leg of a heifer or steer.

This lean and muscular piece of meat needs to have a long slow cooking time with moist heat to avoid a tough, sinewy result. Cooking times suggested to have your beef shank come out tender and moist are up to six hours.

Because of these properties, beef shank is not often available in shops; however, if you find it, it makes an excellent, cheap alternative for stews and stocks.

Flanken ribs are the cross-cut ribs known as Korean-Style ribs. They are cut across the bone and are usually about ½ inch thick. This style is most popular for Korean barbeque.

You may not find this style of cut rib in your local store, as they are more often found cut like this in Asian grocery stores. However, if you’re looking for this particular cut, it’s worth asking your butcher to cut your ribs in this style.

Flanken ribs usually have a much shorter cooking time than the ‘English style’ cut, resulting in a thicker piece of meat.

To get the best flavor from flanken ribs, they need to be cooked fast over high heat, so these are great for grilling and broiling.

Avoid overcooking flanken ribs, as the meat will turn out tough and dry.

Best for: Grilled recipes such as barbeques, where the fast-cooking time will suit the thinner cut of meat. Watch out for flare-ups from dripping fat, and avoid burning the meat.

Also known as beef riblets, rib bones, and finger runs, beef back ribs are cut from the prime rib area high on the back. They’re the bones removed during the cut of rib-eye steaks.

While beef back ribs do not have a lot of meat, it is very flavorful due to the bone. A more significant cut than short ribs, this rich-flavored beef cut is longer than short ribs but is a trendy short rib alternative.

It suits braising and barbecuing, but be aware it is generally a fattier cut than short ribs.

Best for: Barbecues and roasts.

Veal is a cut of beef that does not suit everyone, but it can make an acceptable substitute for short ribs. Male dairy calves and young beef calves are raised until they are approximately 16-18 weeks old, then processed to make veal.

Veal that is cut from the shoulder area is naturally lean, and when cut into cubes, veal can take the place of short ribs in stews and other slow-cooked meals.

Best for: Stews and casseroles, and should be simmered until tender.

If beef is unavailable or unsuitable for your needs, you can substitute beef short ribs with lamb.

Bone-in lamb’s leg or shank is the best substitute for short ribs and is best broiled or roasted. Lamb is leaner than mutton and not as strong-flavored, so it is usually healthier. Lamb is rich in Vitamin B12, Zinc, and Niacin, so it is a healthy substitute for beef.

Cuts of lamb taken from the joint areas where some bones and tendons will add flavor to the meat will best replicate the texture of beef ribs, hence the suggestion for legs or shanks.

Grilled lamb cuts such as leg or rib chops are best cooked until medium-rare and then left for fifteen minutes to rest before serving. This cooking method ensures the meat is tender and rich and prevents it from drying out and becoming tough and chewy.

Sometimes, you may find that you’re in the mood for a favorite beef short rib recipe but don’t really want the taste of beef. Pork ribs can make a great substitute on these occasions.

Choose the cut known as ‘country ribs or pork shoulder, but be aware that pork ribs are smaller than beef ribs. They have less connective tissue, and these two factors will significantly reduce the cooking time.

You can look to pork rib recipes to get a better idea of cooking times and adjust the flavorings to suit your short rib recipe. Obviously, the taste of pork and beef are not similar, but if you’re looking for a change, then pork ribs can make an excellent twist.

Adventurous eaters have tried some strange and unusual substitutions for short rib, though not all might be to your taste!

If you’re keen to try rare and exotic meats as substitutes, you can find options to buy them online.

If you prefer vegan food, or you are going to be cooking for someone who doesn’t eat meat, you will find a range of meat-free substitutes for your short rib recipes.

Seitan is one of the most popular substitutes for meat in recipes, as you can make it resemble the look and texture of many meat styles, and the right flavorings and marinades can help make seitan fill in as a short rib substitute.

Although it doesn’t have a meaty flavor, seitan is often more popular than other vegan substitutes for meat due to its ‘meaty’ texture. It’s an excellent substitute for BBQ ribs as it takes marinades very well and is terrific grilled.

You can keep seitan can be kept in the fridge for a few days and marinade it as you would ribs. However, since seitan is made by rinsing the wheat flour until only the gluten remains, seitan is very definitely unsuitable for a gluten-free diet!

A very popular gluten-free, vegan substitute for ribs is tempeh. Tempeh is traditionally made from fermented cooked soybeans, and the mixture is shaped into a firm cake with a  dense texture.

Tempeh is known to have a nutty flavor that can be quite strong, but it is excellent at absorbing the flavors of marinades and sauces, which makes it great for recipes that require tasty marinades such as grilled ribs.

If you are on a gluten-free diet, one thing to look out for is to check the ingredient list to ensure that your tempeh is completely soy-based and has no other grains added.

To get a very crispy texture to your tempeh ribs, vegan chefs recommend oil frying them first before adding the marinade and grilling them. To avoid the nutty taste of tempeh, one solution is to steam or microwave the block of tempeh beforehand. This can be done by steaming for ten minutes in a steamer over a pot of boiling water, or microwaving it, wrapped in a damp paper towel, for a few minutes.

So, What Are The Best Substitutes For Short Ribs?

As you can see, there is a range of substitutes you can use for short ribs, depending on your budget and your palate. The best results will come from similar beef cuts, but there are options from other animal products. And if you do not like to eat meat, vegan substitutes such as tempeh and seitan produce excellent results and can be marinaded to give similar tasting flavors. 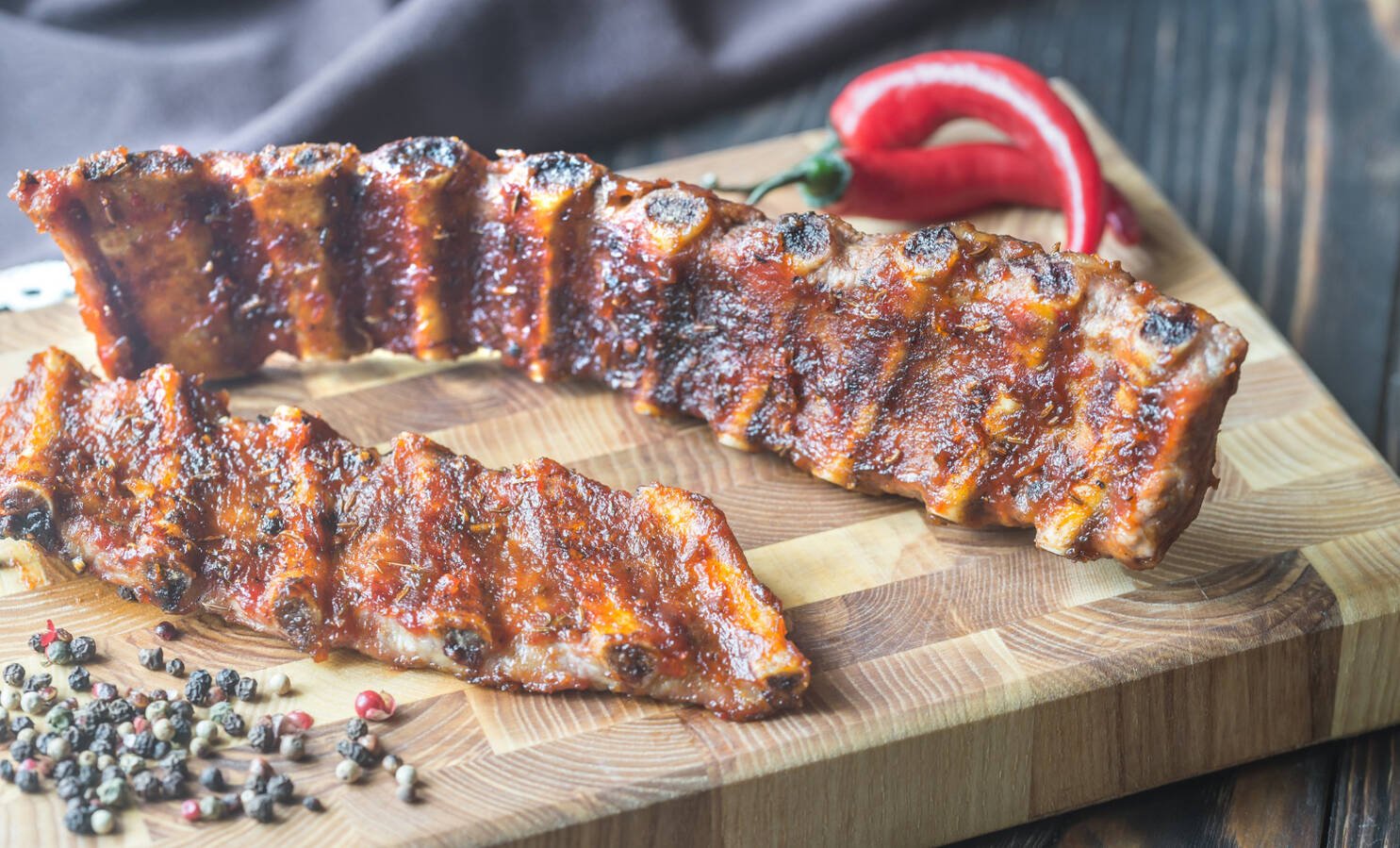 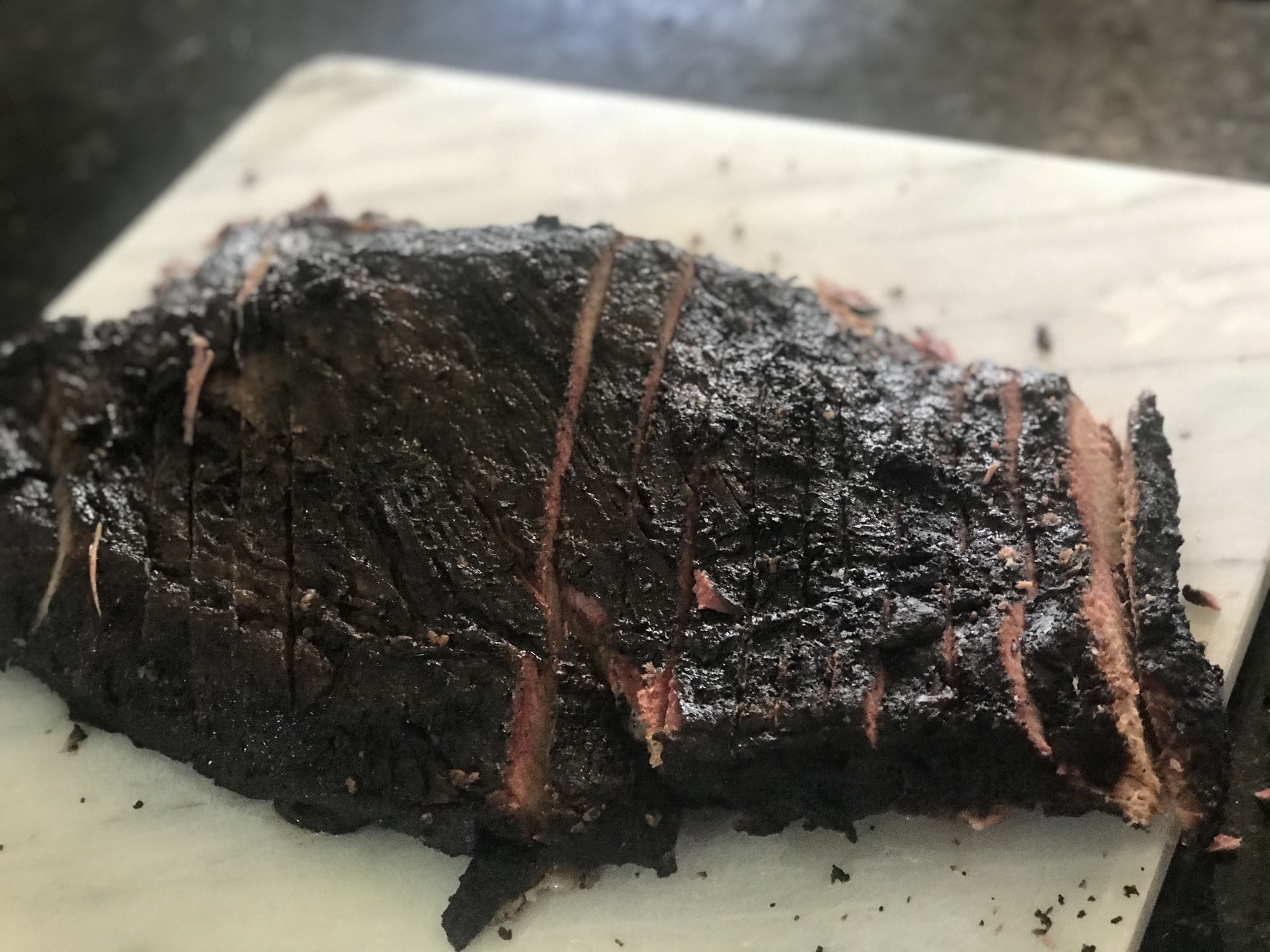 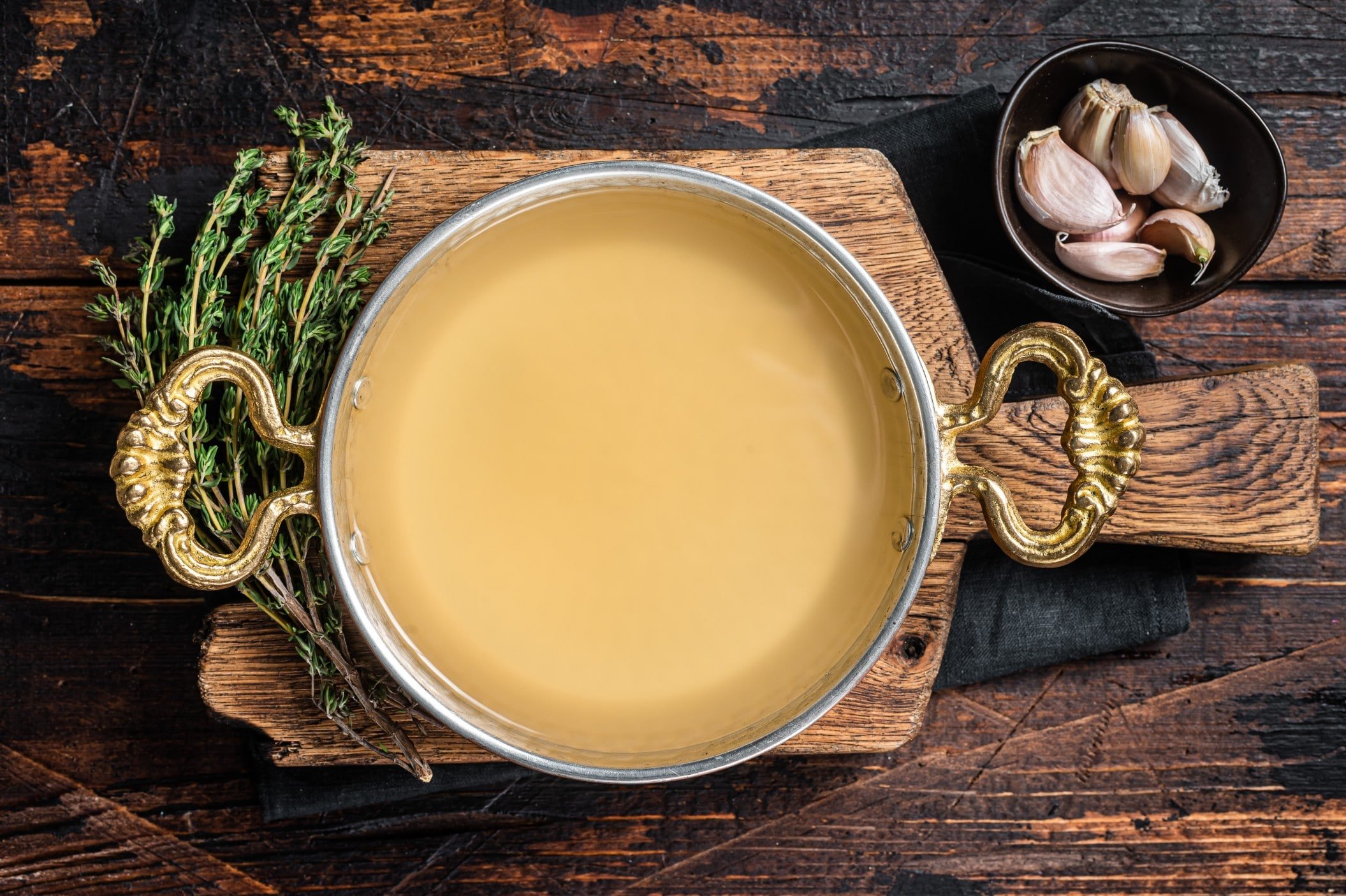 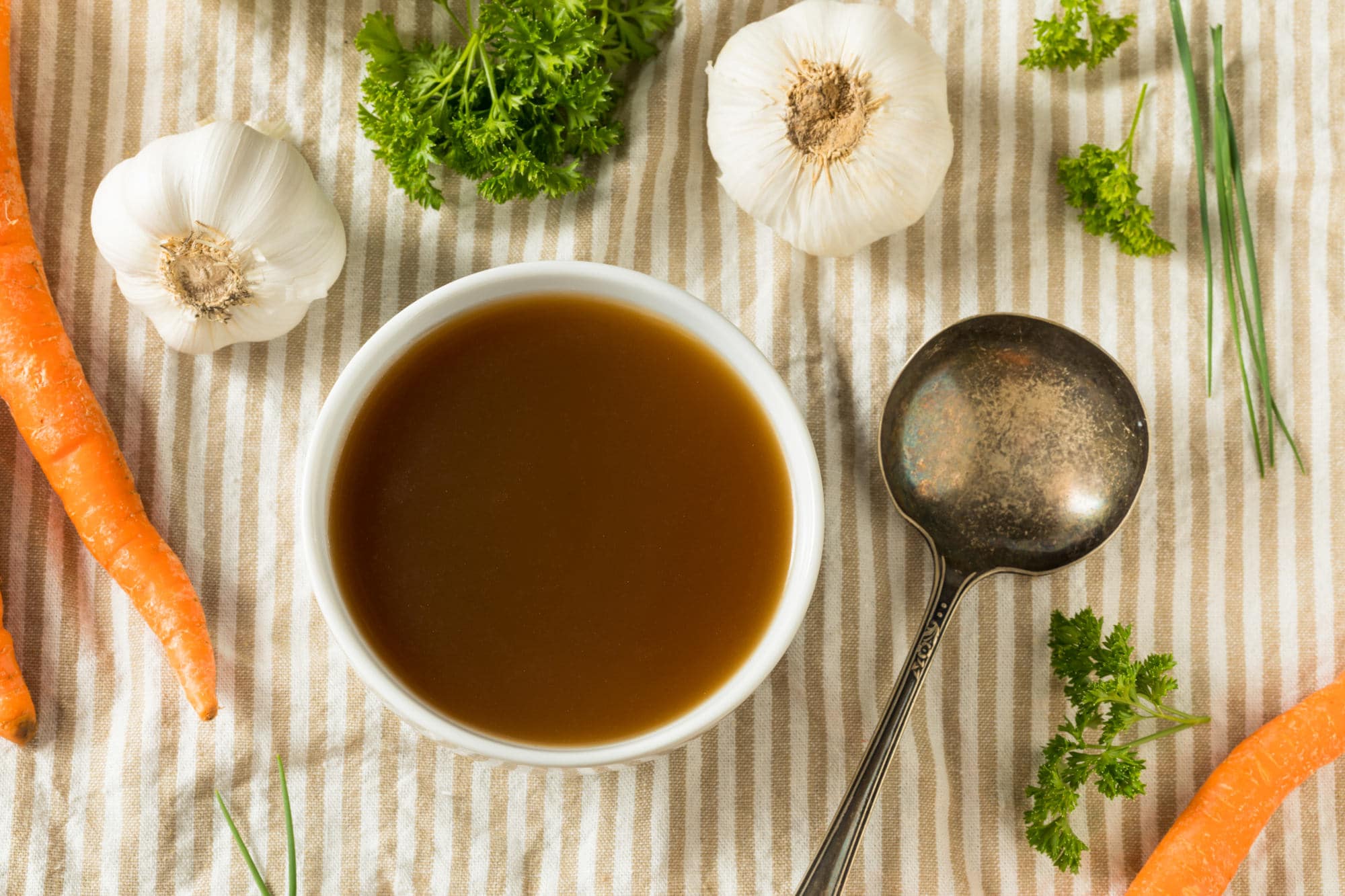 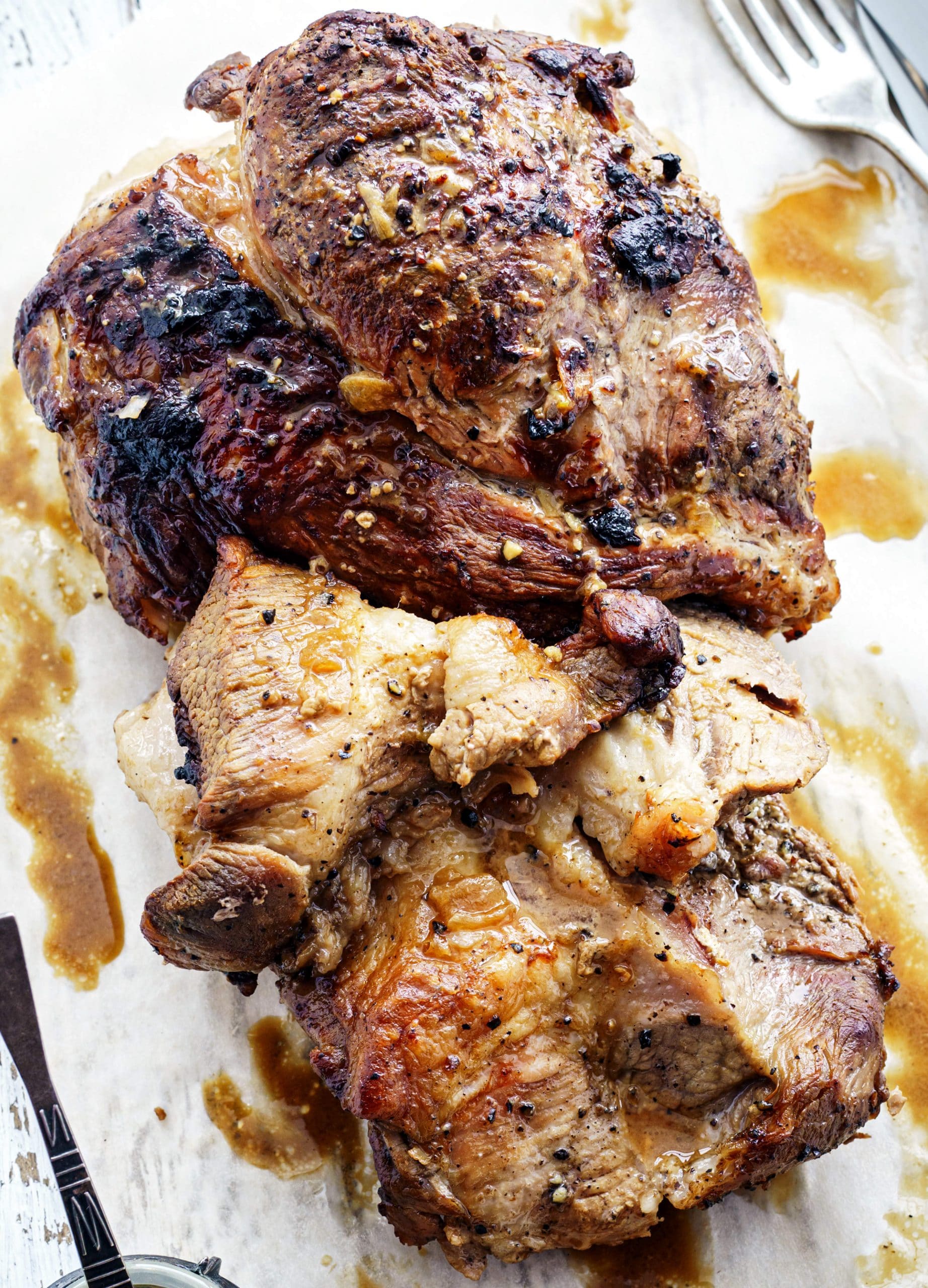 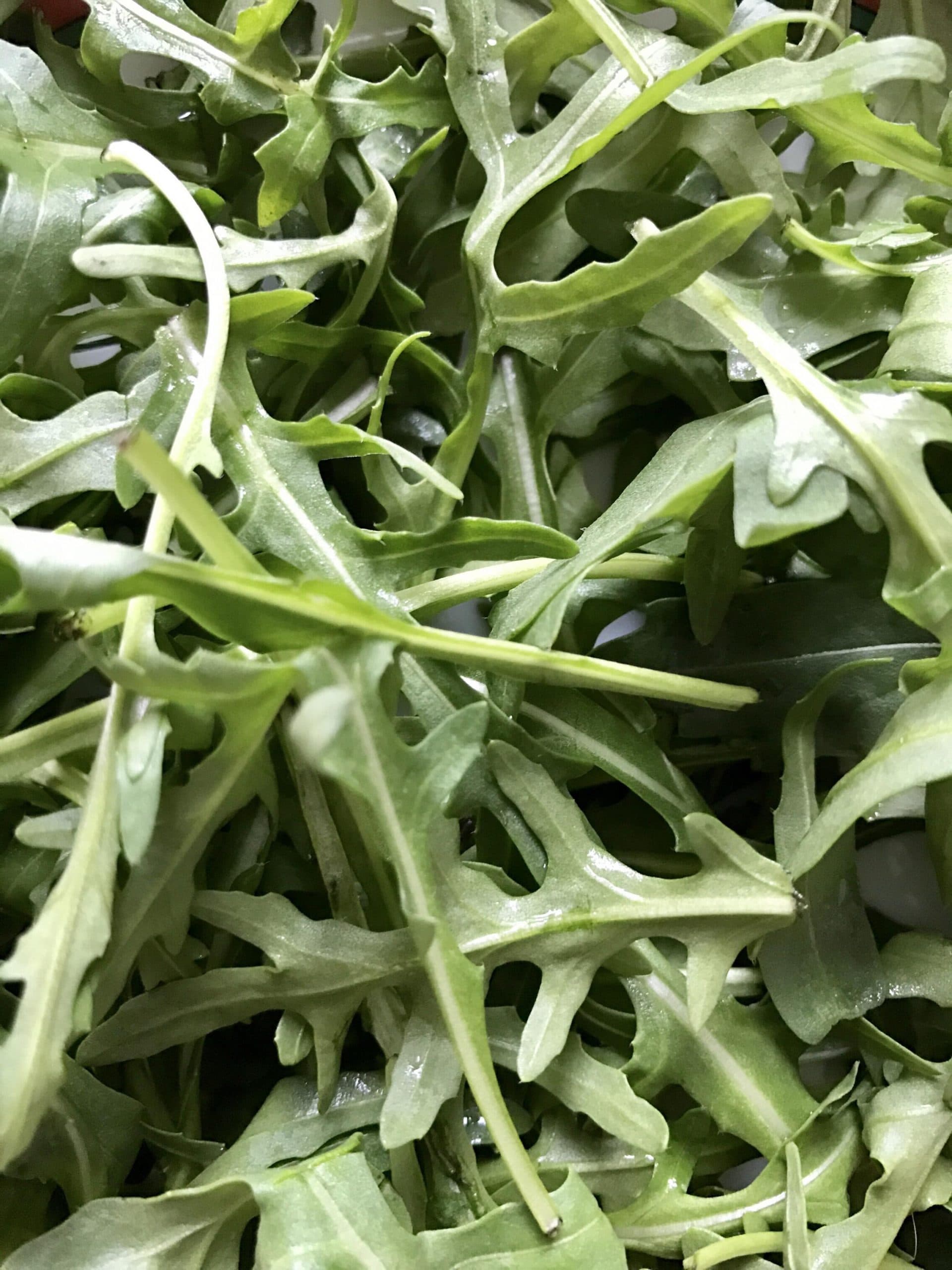 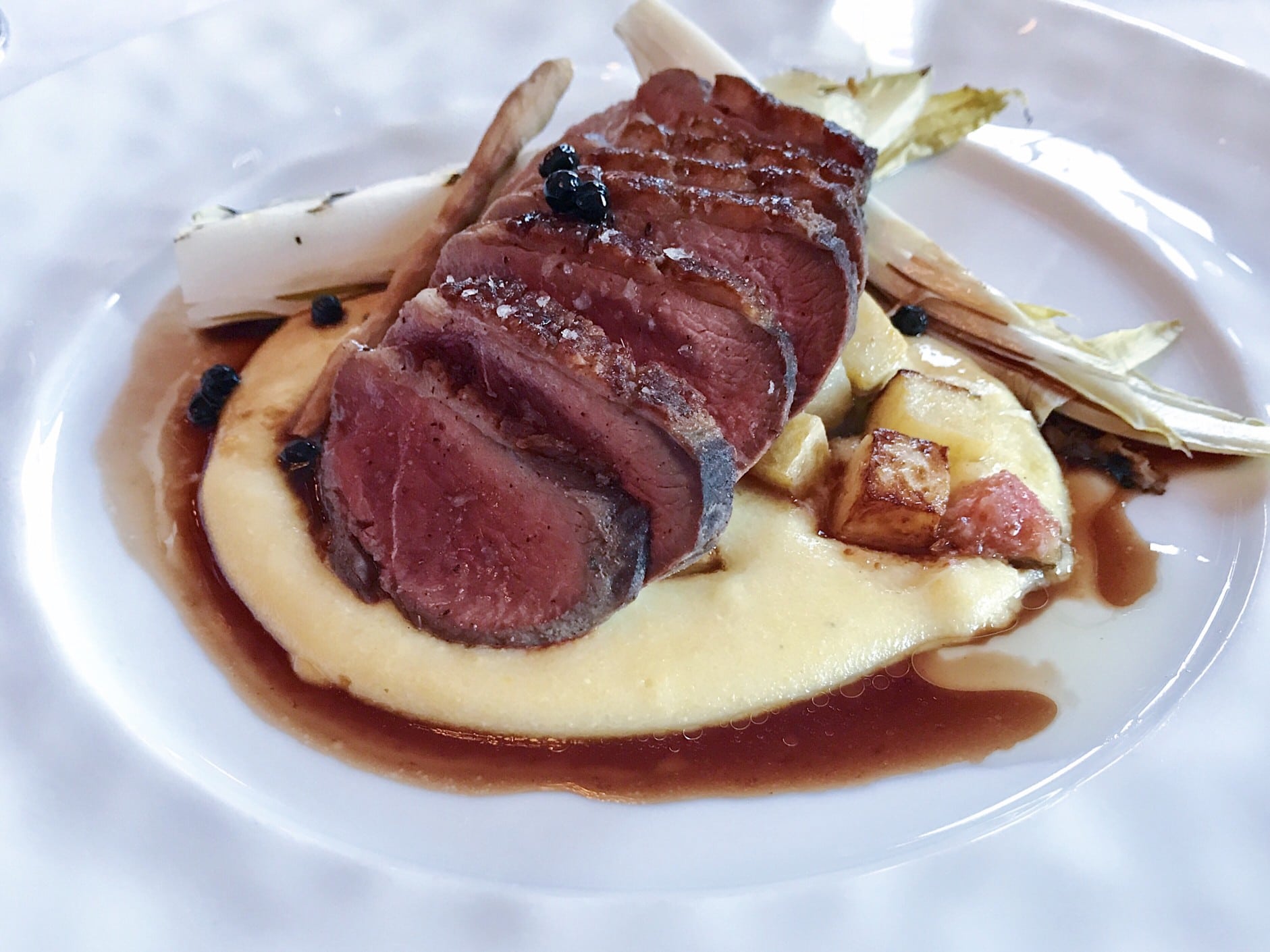 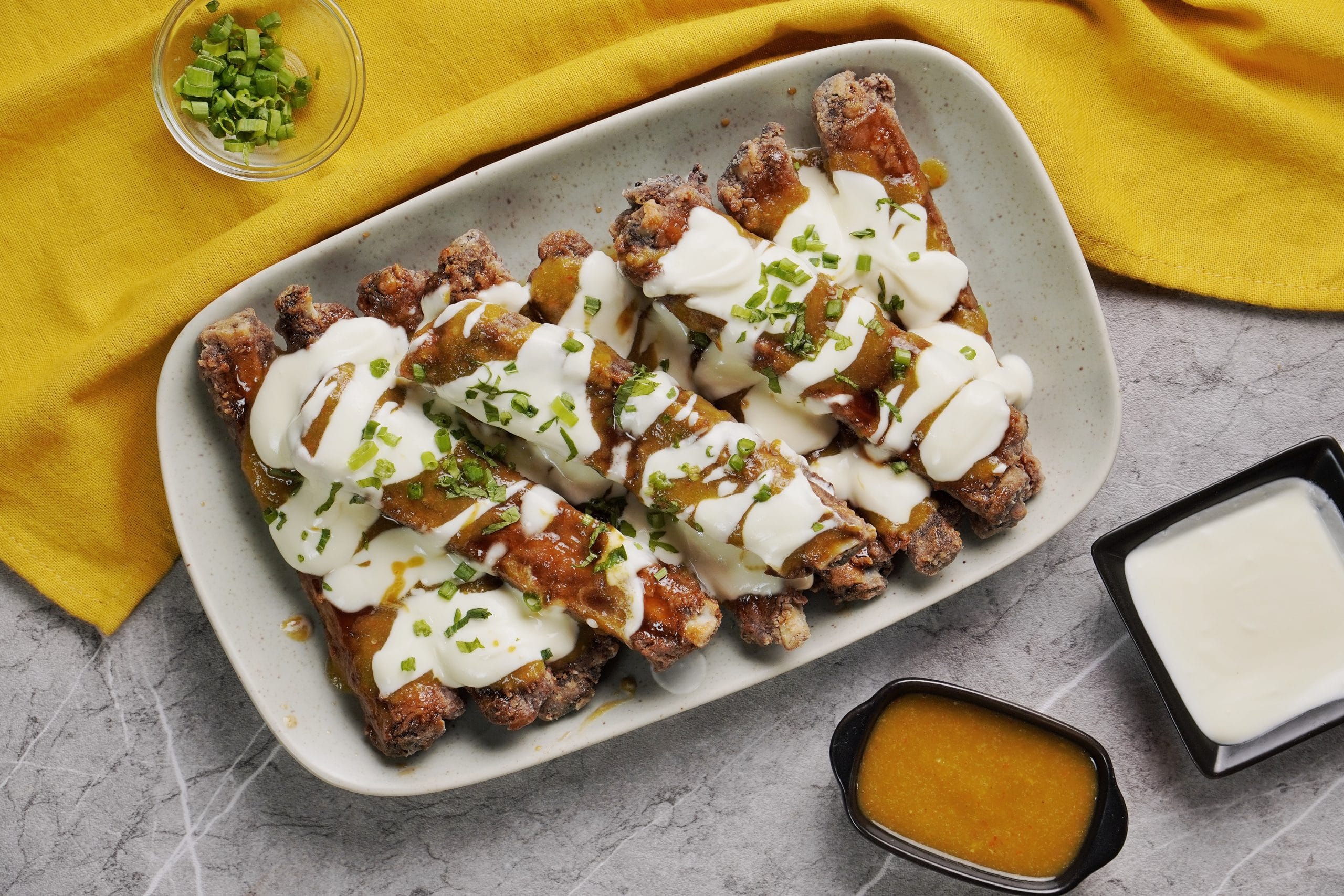