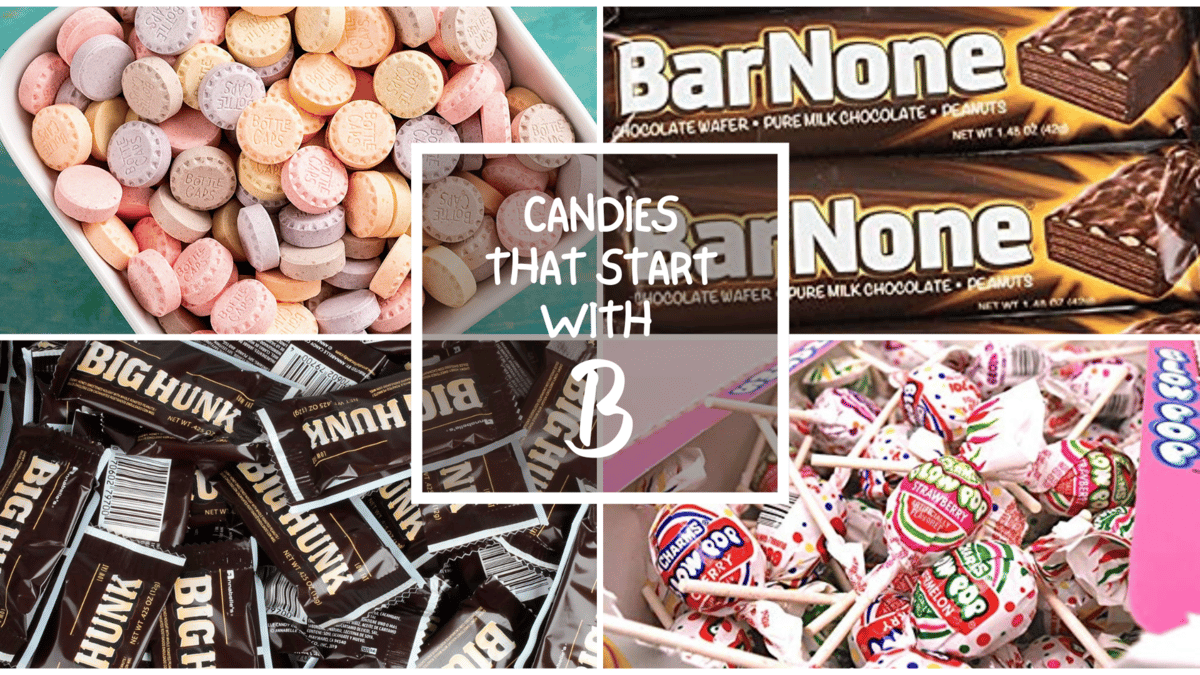 Take a stroll down memory lane with this fun list of candy that begins with B. From nostalgic chocolate varieties to old-timey lollipops, this B list of candy is all but “B list.” In fact, the B candies are a first-class bunch of treats that will take you back to the days of scouring candy store aisles and maybe even keeping a watchful eye for your old favorites when you hit the stores in the future. Enjoy this bite of B candy bliss.

Processed by the Ferrero Candy Company, Baby Ruth candy bars are a sweet chocolate confection that was first introduced in 1921. Though it’s a common misconception that the candy bar was named for the legendary New York, Yankee, it was actually named after Grover Cleveland’s young daughter who was lovingly nicknamed “Baby Ruth.” This US-based candy bar has remained a popular treat since its founding.

Of note, Baby Ruths are a milk chocolate candy bar with caramel, peanut, and nougat filling. Rich and salty, sweet and decadent, the Baby Ruth bar is made of all-natural ingredients and comes in full-size, fun-size, and bite-size varieties. The full-size Baby Ruth bar has 280 calories per serving and five grams of fat, 29 grams of sugar, one gram of fiber, and just over four grams of protein. If you have dietary restrictions, beware that Baby Ruth bars are processed with animal byproducts, milk, and dairy solids.

Manufactured by The Topps Company, Inc., Baby Bottle Pops is just one of the many candy, gum, and trading card varieties the company sells. Introduced in 1988, Baby Bottle Pops are a type of lollipop encased in a small, plastic baby bottle, thus the name. What’s more, the base of the baby bottle contains a sugary powder that you dip the tip of your lollipop in, kind of like Fun Dip, before enjoying it. The candy’s catchy jingle, performed by The Jonas Brothers, claims “You can like it, shake it, and dunk it,” but no matter how you eat the hard candy, you certainly look silly and infantile doing so.

Made of ingredients such as sugar, corn syrup, and citric acid, Baby Bottle Pops are both fun and tasty to eat. If you’re concerned about food allergies, know that Baby Bottle Pops contain milk and soy. Best of all, Baby Bottle Pops come in a variety of flavors including cherry, watermelon, sour blue raspberry, and rainbow sherbet to name a few. Finally, each serving of Baby Bottle Pops has 120 calories and 25 grams of sugar but is not a significant source of protein or dietary fiber.

Though banana-flavored candy isn’t the most popular variety for candy heads, there is a small population of folks, who can’t get enough of it (ahem). Enter Bananarama candies which are a type of hard, like really hard, candy that are bright yellow, bite-sized, and banana flavored. If you’re working on a yellow candy bar, Bananarama should definitely make the cut. Made by the same producer of Hubba Bubba chewing gum, Bananarama is essentially the banana candies plucked from the Runts variety packs and given a name of their own.

Loaded with all the delicious artificial ingredients your childhood memories are made of, Bananarama is made of confectioner’s glaze and artificial flavors upon artificial flavors. Of note, Bananarama may also contain traces of soy. Lastly, each serving of Bananarama, which is approximately 22 pieces, contains 50 calories and 12 grams of sugar while not a significant source of dietary fiber, protein, or fat.

Another tasty banana-flavored treat, Banana Splits are bite-sized taffy candies. Originally manufactured by Necco and invented in Boston in the 1840s, today, they’re produced by Stichler Products, Inc. in Reading, Pennsylvania. Notably, Banana Splits are chewy and creamy and tend to, like most taffies, get stuck in your teeth.

Primarily composed of sugar, salt, corn syrup, and coconut oil, Banana Splits are gluten-free, though not vegan because they contain eggs too. Each serving of Banana Splits, roughly four pieces in total, contains 150 calories, one-and-a-half grams of fat, 21 grams of sugar, and zero protein or dietary fiber.

BarNone is a crunchy chocolate bar that’s manufactured by the Iconic Candy Company in Great Neck, New York. First hitting the candy scene in 1987, BarNone is a milk chocolate bar with a crunchy peanut and wafer center. Similar to a KitKat, BarNone was given its name for the idiom of the same name meaning it’s the best and can’t be beaten. Though a less popular chocolate bar variety, BarNone is delicious nonetheless.

Notable ingredients in a BarNone candy bar include milk chocolate, dry roasted peanuts, and a chocolate cream wafer. Briefly pulled from stores for lack of sales, BarNone is making a comeback in their iconic brown wrappers. Lastly, each BarNone candy bar has 230 calories, 13 grams of fat, 12 grams of sugar, four grams of protein, and one gram of dietary fiber.

Created by the Annabelle Candy Company, Big Hunk came out in the 1950s; they’re handmade in Hayward, California. The original Big Hunk is a sticky and nutty bar with crunchy roasted peanuts and sweetened nougat. Besides the popular original variety, Big Hunk also makes almond and chocolate-covered varieties. If you’re a big hunk yourself, you ought to give this nutty confection a try.

The original Big Hunk bar is made with corn syrup, sugar, peanuts, and honey to name a few of its ingredients. If you have dietary restrictions, beware that the Big Hunk bar does contain eggs and soy and they’re also processed in a plant with milk, wheat, and other tree nuts. Big Hunk bars carry 230 calories, three grams of fat, 23 grams of sugar, three grams of protein, and one gram of dietary fiber. If you go for the almond variety, they have fewer fat grams.

First introduced in the late 1920s by the Schutter-Johnson Company, the Bit-O-Honey patent has changed hands many times since then. Today, Bit-O-Honey is owned by Spangler Candy which is housed in Bryan, Ohio. Of note, this company is also the proprietor of many other popular candy brands including Starburst and DumDums to name a few. If you’ve never tried one of these nostalgic candies, Bit-O-Honey is made up of six rectangular, connected taffies that are honey-flavored and contain bits of almond.

Though the original variety is Bit-O-Honey’s most popular, there have been many spin-off varieties over the years including chocolate and licorice flavors. Bit-O-Honey is enveloped in an iconic red and yellow wrapper that depicts the cutest little honeybee in the upper left-hand corner. Significantly, Bit-O-Honey is made of corny syrup, sugar, skim milk, and almond among other ingredients. Lastly, a Bit-O-Honey bar is comprised of 150 calories, three grams of fat, 19 grams of sugar, one gram of protein, and zero dietary fiber.

Invented by Charms, Blow Pops first debuted in 1973 and were an instant success. This newfangled spin on traditional lollipops was a hit. In 1988, Charms sold Blow Pops to Tootsie Roll Industries which still manufactures them today, though they are still called Charms Blow Pops. Essentially, a Blow Pop is two treats in one: a sweet, hard lollipop shell that hides a pink wad of bubble gum at its center.

Blow Pops come in five delicious flavors, including the original cherry as well as watermelon, sour apple, grape, and strawberry. The primary ingredients in a tasty Blow Pop are sugar, corn syrup, citric acid, and artificial flavors. Tootsie Roll Industries warns that Blow Pops may contain milk and soy. Finally, each delicious sucker contains 70 calories and 13 grams of sugar, though they’re not a noteworthy source of fat, dietary fiber, or protein.

Manufactured by the Ferrara Candy Company, the Boston Baked Beans slogan, “Peanuts Get Dressed Up” is all you needed to know about this unique candy. Developed in Chicago in 1924, Boston Baked Beans are dry roasted peanuts coated in a sweet candy shell. The size, shape, and color of the candy coating make these sweet treats look exactly like baked beans, thus the ironic name.

Each package of Bottle Caps comes in a variety of soda flavors including cherry, root beer, cola, and orange. Notably, Bottle Caps are made of a combination of natural and artificial flavors and may contain eggs. An eight-piece serving of Bottle Caps has 60 calories and 13 grams of sugar, though they’re not a remarkable source of fat, dietary fiber, or protein.

Distributed by Ferrero Candy Company, a sister company to Ferrara, Butterfinger was first introduced in 1923 in Chicago. Since that time, Butterfinger has changed manufacturers a handful of times before landing at Ferrero in 2017. Butterfingers are a bar of yummy chocolate and crispy peanut butter; if you’ve ever eaten a Butterfinger, you may recall the delicious, yet unnerving feeling of all that crispy filling stuck to your teeth after each bite. But hey, candy’s never been good for your teeth, right?

Well known as Bart Simpson’s favorite candy bar, Butterfinger’s come in an emblematic yellow wrapper, similar to Bart’s skin color, and blue writing; there’s no missing Butterfinger on the candy shelf. If you’re grabbing a Butterfinger anytime soon, some of its main ingredients include corn syrup, sugar, peanuts, and vegetable oil; they may also contain milk and soy. Ultimately, each Butterfinger serving has 275 calories, 11 grams of fat, 28 grams of sugar, three grams of protein, and 1 gram of dietary fiber.

BB Hats are a rectangular taffy on a lollipop stick; first invented by The Ideal Candy Company in the early 1920s, BB Bats are now manufactured by Runk Candy in Cincinnati, Ohio. Though they’re not commonly found in grocery and candy stores today, they can still be purchased online and occasionally found in specialty shops. Of note, BB Bats come in a variety of chewy flavors including chocolate, vanilla, strawberry, and banana.

The BB Bats’ logo is depicted on a folded piece of wax paper and includes a baseball player battering up beside the candy’s name in an old-timey font offset by baseballs. One of the best places to enjoy a BB Bat is at a baseball game; the chewy sucker takes a while to break down and will last many innings. Each sweet and gummy BB Bat is made of corn syrup, sugar, salt, and artificial flavors; furthermore, each candy contains 230 calories, three grams of fat, 23 grams of sugar, one gram of dietary fiber, and three grams of protein.

If you’ve enjoyed perusing this list of childhood favorites, you’ll certainly enjoy what the rest of the alphabet has to offer. With hundreds of candies commercially manufactured each year, there’s something for every pallet. So what’s your favorite B candy?