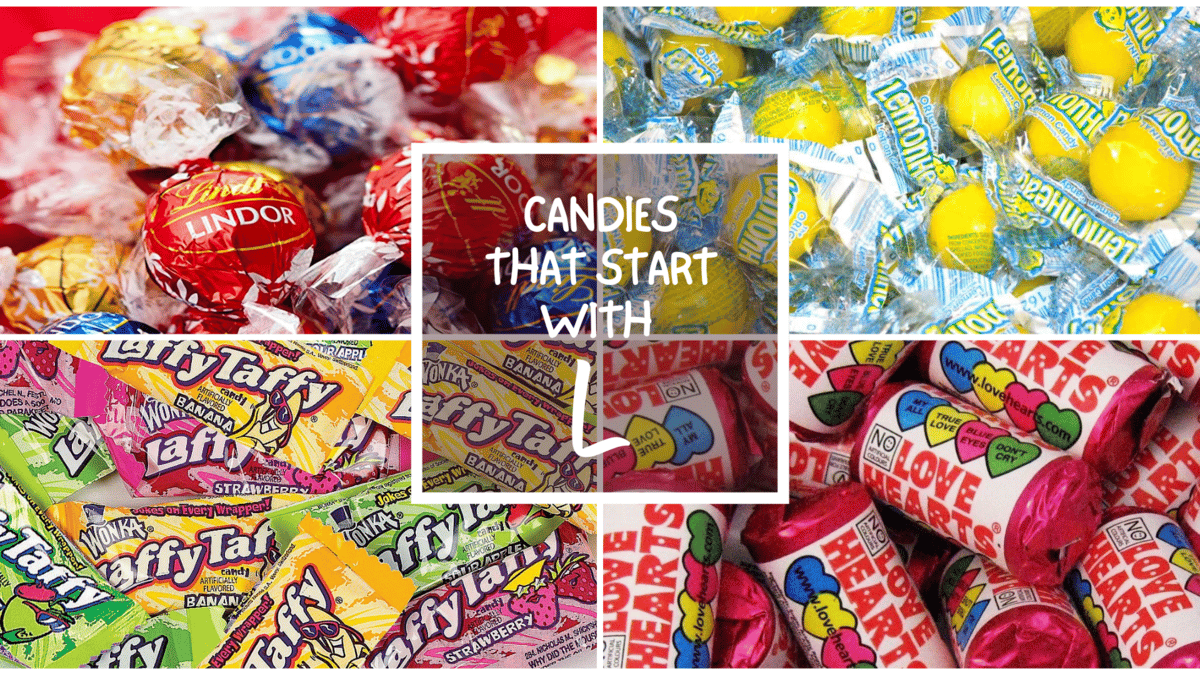 These chewy, sticky, addicting candies are produced by the Ferrara Candy Company. Laffy Taffy is a flavorful taffy that sticks with you…literally. Though they were first manufactured in the 70s in Bloomington, Illinois, Laffy Taffy has been a product of Ferrara since 2018. When Laffy Taffy first came out, they were individually wrapped, bite-sized, hard taffy squares that could be individually purchased at your local candy store. Today, however, the recipe has changed a bit to make them softer and stretchier and rectangular instead of square. An interesting tidbit is that in 2005 a hip-hop group named D4L released a popular song called “Laffy Taffy” which invites women to “shake that Laffy Taffy,” presumably equating the sweet candy to her booty.

Laffy Taffy is available in a bevy of mouth-watering flavors such as watermelon, banana, sour apple, blue raspberry, strawberry, cherry, and grape. Besides the standard, individually-wrapped rectangle pieces, Laffy Taffy is also available in longer pieces, similar in size to an Airhead, ropes, and bites. Laffy Taffy’s main ingredients include corn syrup, sugar, palm oil, and both natural and artificial flavors. Finally, a serving of Laffy Taffy, which is about three mini bars, contains 110 calories, one-and-a-half grams of fat, and 17 grams of sugar. Concerning allergens, Laffy Taffy does contain soy.

Manufactured by Malaco, a Swedish candy maker, Lakrisal is salty licorice that was invented in the 1950s. It’s available in Nordic countries such as Denmark, Norway, and Finland as well as some places in the US and Israel. Lakrisal are small, powdery tablets that come in a roll, sort of like Mentos, of 20 candies. Unlike most licorice products that are commonly black, Lakrisal is an unappetizing dusty gray color.

Marketed as a throat lozenge, Malaco has dabbled in other flavor profiles but none have been successful like the licorice variety. Some failed flavors included lemon and a spicy variety that was made with chili powder and pepper oil. Eek! Of note, Lakrisal’s only three ingredients are sugar, licorice extract, and ammonium chloride. Each Lakrisal tablet contains roughly 17 calories and four grams of sugar.

Invented in the early 1800s, Lemon Drops are a hard, round candy that was first manufactured in England. Like Lakrisal, Lemon Drops were first used as a throat lozenge. Though there are many producers of Lemon Drops, the forerunner is Brach’s, a subsidiary of Ferrara Candy Company. Lemon Drops are a niche all themselves; you either love or hate these overtly sour, lemon candies. Significantly, Lemon Drops are lemon-shaped, mini candies that are hard and sugar-coated.

What’s more, Brach’s prides itself on making Lemon Drops with real lemon juice and oil. Other Brach’s Lemon Drops ingredients include sugar, corn syrup, and malic acid. Lastly, every three pieces of Lemon Drops have 50 calories and 10 grams of sugar.

Lemonheads are overtly tart candy that were invented by the Ferrara Candy Company in 1962. The name “Lemonehead” was given by the candy’s inventor, Nello Ferrara, who noticed his grandson had a lemon-shaped head at birth; the candy’s packaging even features a guy with a lemon for a head. Lemonheads are tiny, round, hard candies; a thick sugar coating is layered over the sour center of the confection. Though Lemonheads are the original “head” candy, Grapehead, Applehead, and Cherryhead are other varieties that followed suit; each is sweet on the outside but super sour on the inside.

Besides the ball-shaped hard Lemonheads, other varieties include Chewy Lemonheads and Lemonhead Twists. The main ingredients in Lemonheads are sugar, corn syrup, citric acid, and lemon juice. Finally, a serving size of about 10 pieces contains 50 calories and 11grams of sugar. If allergens are a concern, beware that Lemonheads are manufactured in a facility that uses milk, eggs, almonds, coconut, peanuts, and soy.

Licorice has its roots in Ancient China where the licorice plant was classified as a significant medicinal herb. Although many manufacturers make Licorice today, the leading producer in the US is The Hershey Company. With both red and black varieties, they are well-known for their Twizzler Twists Black Licorice candy. These Licorice confections are chewy, twisty sticks that come in packages of about 40 pieces. Some of the primary ingredients in Licorice include corn syrup, wheat flour, sugar, and licorice extract. A serving, of about three pieces of Licorice, has 120 calories, 14 grams of sugar, and one gram of protein.

Life Savers are colorful, ring-shaped candies that were invented by a Cleveland candy maker in 1892. Life Savers were originally packaged in foil-wrapped rolls of 14 candies. Each roll contained five fruity flavors in the colors red, yellow, green, orange, and purple. Today, Life Savers are manufactured by Mars, Incorporated and come in upwards of 40 flavors. Some popular flavors besides the original fruit-flavored candy include mint, spearmint, orange, fruit punch, mango melon, tangerine, and raspberry.

Though the original Life Savers were only available in pocket-sized rolls, they now come in individually-wrapped bags, gummies, candy canes, and more. Over the years, the individually-wrapped ones have become a popular candy dish treat. The standard, hard Life Savers are made with sugar, corn syrup, citric acid, and both artificial and natural flavors. Finally, four Life Saver pieces contain 60 calories and 12 grams of sugar.

Besides the milk chocolate variety, Lindor Truffles also come in sea salt, white chocolate, hazelnut, dark chocolate, caramel, stracciatella, and other varieties. Also, besides the traditional pouch packaging, they’re available in gift boxes, gift bags, tins, and an assortment of other beautiful packages. Lindor Truffles are made with a secret recipe that features sugar, milk, cocoa butter, vegetable oil, and other ingredients. Though Lindor Truffles are kosher, they may contain peanuts or tree nuts. Lastly, a serving of three Lindor Truffles has 220 calories, 17 grams of fat, 14 grams of sugar, two grams of protein, and one gram of dietary fiber.

Originally introduced in the UK in 1976, Lion Bar is a chocolate-covered cereal bar manufactured by Nestle. Lion Bars are filled with a chewy cereal blend with caramel, crispy wafers, and crunchy cereal bits. The packaging of this fine chocolate bar features the “Lion” logo in bright yellow letters as well as the candy’s lion mascot roaring in the upper lefthand corner. Besides the standard Lion Bar, spinoff varieties such as the Lion Milk Duo and a peanut flavor are also popular.

Lion Bars have a unique flavor profile and make up the likes of which are unmatched in the US. Lion Bars are made with sugar, wheat flour, milk, and cocoa butter among other ingredients. Finally, each Lion Bar has 240 calories, 11 grams of fat, 22 grams of sugar, and three grams of protein. Best of all, Lion Bars contain no artificial ingredients.

Love Hearts were launched by Swizzels Matlow Limited in 1954, though they’re more colloquially referred to as just Swizzels. Swizzels is a UK-based candy manufacturer who conceived this sweet way for people to share love messages; each candy features a lovely sentiment such as “you’re fab” and “hugs.” Though Love Hearts’ standard packaging is cellophane, twist-tie wrappers, similar to Smarties, they’re now also available in bags and giant multi-packs.

Love Hearts are a sweet and powdery tablet candy akin to a Necco Wafers, and they are vegetarian, vegan, celiac, and Halal-friendly. The main ingredients in Love Hearts are sugar, malic acid, and sodium bicarbonate. Finally, a serving of Love Hearts contains 70 calories and 14 grams of sugar.

Whether you’re checking in for the sourest candies to make you pucker up or the chewiest taffies that you’ll be picking out of your teeth for hours, you’ve landed in the right place. From all the lemon confections you can think of to licorice delights and everything in between the L candies are fabulous.