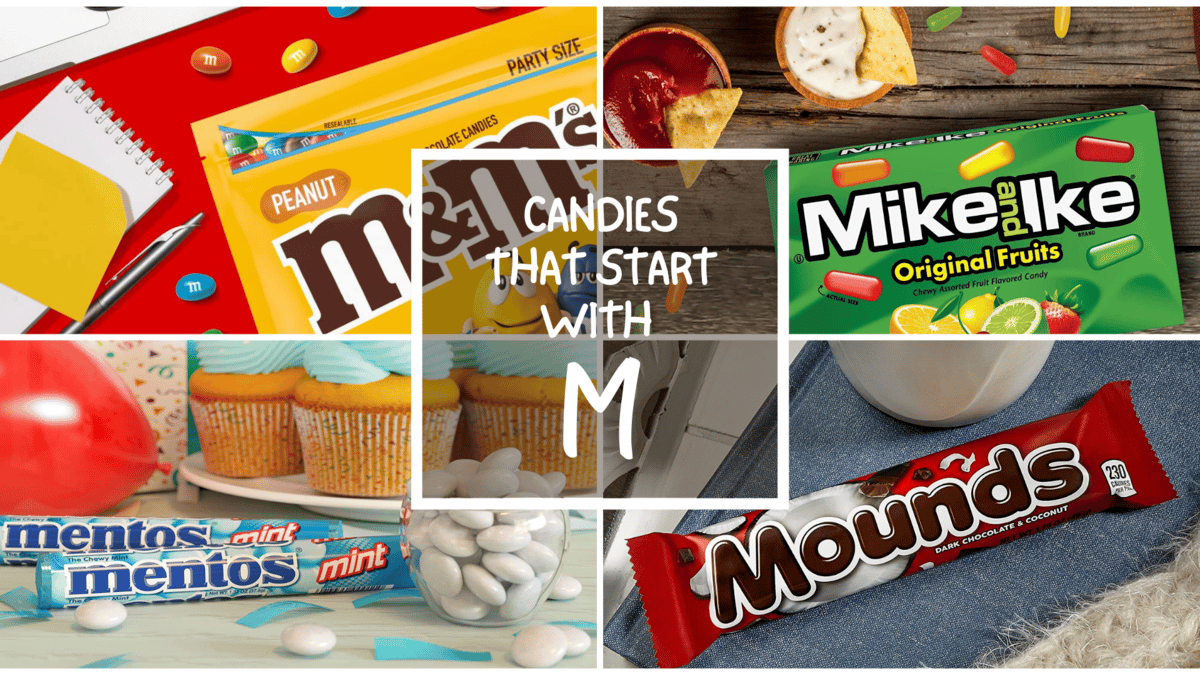 Welcome to the M list of wonderful confections. This list features some of the biggest household names, most popular Halloween treats, and an unexpected candy or two. From marshmallow treats to fruity delights and iconic chocolate bars to bite-sized nibbles, the M candies come through with a bang!

Invented in Newark, New Jersey by the Mars Company in 1941, M&Ms were originally packaged in brown cardboard tubes. Although brown remains synonymous with this candy’s packaging, they’re now predominantly packaged in bags. M&Ms are small, round chocolates covered in colorful hard candy coating; original M&Ms come in brown, orange, yellow, green, red, and blue. Besides the milk chocolate flavor, M&Ms are now available in many other varieties such as peanut, pretzel, peanut mix, peanut butter, fudge brownie, caramel, and crispy.

Additionally, M&Ms come in many packaging options like full-size bags, fun-size bags (popular at Halloween), bulk bags, and beyond. Moreover, M&Ms come in seasonal colors and flavors and can also be personalized if ordered directly from the manufacturer. M&Ms are known globally by the personified candy characters who have been a popular group Halloween costume over the years. The main ingredients in M&Ms are milk, cocoa, sugar, corn starch, and corn syrup while a serving contains 140 calories, five grams of fat, 18 grams of sugar, and one gram of protein.

Invented in the mid-1930s by Boyer Candy Company, Mallo Cups are a milk chocolate treat filled with a coconut-laced marshmallow filling. Produced in Altoona, Pennsylvania, Mallo Cups are similar in shape and size to Reese’s Peanut Butter Cups. Like Reese’s, they’re also packaged with two cups per pouch. Though the original Mallo Cup has that marshmallow filling, spinoff varieties include dark chocolate, peanut butter filling, butterscotch, and buttered pretzel.

Invented in the mid-1950s in Germany, Mambas are colorful, chewy candies that come in an assortment of fruit flavors. Mambas are small, stick-shaped chews that are manufactured by August Storck Candy Company. The original five flavors that Mamba was available in are strawberry, raspberry, orange, cherry, and lemon, however, other varieties are now available. Historically, Mamba was packaged in a small pack of five pieces, however, today they come in bags and stick-packs in addition to six-piece packs. Some of the new Mamba flavors include sour and tropical blends.

Furthermore, the main ingredients in Mamba chews are sugar, glucose syrup, palm oil, sorbitol, and gelatin. Finally, a serving of Mamba, which is about six pieces, has 120 calories, two grams of fat, and 20 grams of sugar.

Mary Janes are an old-timey taffy-type candy with distinct peanut butter and molasses flavors shining through. Invented in 1914 by Robert O. Lord’s Candy Company, these were commonly found in the type of candy displays you reach in to grab a handful. Though they’ve been discontinued and remarketed a handful of times over the years, Mary Janes are still accessible today. Mary Janes are bite-size rectangular taffy that is a beautiful butterscotch color. Each candy is individually wrapped in distinct yellow and red wax wrappers.

Today, Mary Janes are manufactured by Spangler Candy Company. The primary ingredients in Mary Janes are corn syrup, dry roasted peanuts, sugar, and molasses and if allergens are a concern, know that they contain both nuts and soy. Lastly, a serving of Mary Janes contains 30 calories, one gram of fat, and four grams of sugar.

Mentos were first produced by two brothers in 1932 in Poland, but it wasn’t until the 1950s that they became globally exported. Mentos are chewy, bite-sized round candies that are popularly produced in a variety of mint and fruit flavors. Some of the most common Mentos flavors include mint, mixed fruit, strawberry, rainbow, cinnamon, spearmint, and green apple. Mentos are packaged in a foil roll of about 14 discs.

Mentos is well known for the catchy slogan, “Mentos, The Freshmaker,” and though they do the trick of freshening your breath, they’re awfully tasty too. With the great success of the chewy candies, Mentos also launched a line of chewing gum in 2011. Standard Mentos, however, are made with sugar, glucose syrup, vegetable oil, and fruit juices. Ultimately, each Mentos chew contains 10 calories and three grams of sugar.

Mike & Ikes are pill-shaped, fruit-flavored candies that were introduced in 1940. Manufactured by Just Born Quality Confections in Bethlehem, Pennsylvania, Mike & Ike is a close relative to Hot Tamales which you can find on display cases directly next to Mike & Ikes. Mike & Ikes are packaged in boxes perfect for sharing; they’re also a popular movie theater treat. Mike & Ike was first introduced in a mixed box of original fruit flavors; since then, tropical, Jolly Joes, berry, sour, and other flavors followed.

Of note, Mike & Ikes are made using some of the following ingredients: sugar, corn syrup, food starch, and citric acid. Happily, these iconic sweet candies are gluten-free and have 100 calories and 18 grams of sugar per serving.

Invented by F. Hoffmann & Co., Milk Duds first hit candy stores in Chicago in 1928. Today, Milk Duds are manufactured by Hersheyland in Hershey, Pennsylvania. Milk Duds are chocolate-covered bite-sized balls that are manufactured in iconic yellow packaging. Ironically, Milk Duds got their name for the irregular ball shape of the candies; the inventor found it impossible to make perfectly round balls out of the caramel and therefore dubbed them duds. Milk Duds’ recipe calls for a lot of milk, therefore the “milk” part of the candy’s name.

Moreover, Milk Duds are a one-trick pony in that besides variations in packaging, there are no other flavors. Milk Duds are creamy, chewy, and delicious. They’re made with corn syrup, sugar, vegetable oil, milk, and brown sugar. A serving of Milk Duds has 130 calories, five grams of fat, and 16 grams of sugar. Best of all, Milk Duds are certified kosher.

Developed in 1923 by Mars, Incorporated, Milky Way is a household name. Manufactured in Minneapolis, Minnesota, Milky Ways are milk chocolate candy bars filled with chewy caramel and fluffy nougat. It’s commonly assumed that the classic candy bar is named for the astronomical galaxy, however, they’re actually named for milkshakes which were coming into popularity when the candy was invented; regardless, the Milky Way is truly out of this world.

Besides the standard candy bar size, Milky Ways are also available in fun-size and mini varieties, both of which are popular Halloween treats. In addition to the original flavor, Milky Ways also come in a dark chocolate variety called Milky Way Midnight as well as salted caramel and fudge. The original Milky Way is made with the following main ingredients: milk chocolate, corn syrup, sugar, palm oil, and skim milk. Finally, a standard size bar has 240 calories, nine grams of fat, 32 grams of sugar, and two grams of protein.

Invented in 1920 in New Haven, Connecticut, Mounds are a dark chocolate sensation. Today, Mounds are manufactured by The Hershey Company in Pennsylvania. Mounds are a dark chocolate, coconut-filled candy bar that is packaged in an archetypal red wrapper. Each package contains two half-size candy bars. Though Mounds is a close relative to the Almond Joy bar, it only comes in one flavor. Various packaging varieties, such as king-size and snack-size, are available.

Mounds are commonly used in baking recipes such as Mounds Macaroons. They’re also known for the catchy jingle, “Sometimes you feel like a nut, sometimes you don’t,” which refers to the idea that if you’d like a nutless alternative to Almond Joy, Mounds is the answer. The main ingredients in Mounds are corn syrup, semi-sweet chocolate, milk fat, soy, and coconut. Mounds are both gluten-free and kosher and contain 230 calories, 13 grams of fat, 21 grams of sugar, three grams of dietary fiber, and two grams of protein.

Still a popular candy bar today, Mr. Goodbar was invented by The Hershey Company in 1925. Mr. Goodbar is a milk chocolate bar loaded with bits of crunchy peanuts. Each bar, similar to the Hershey Bar, contains 12 break-off pieces that make it perfect for sharing. Interestingly, during World War I, Mr. Goodbar was marketed as a lunch substitute because of the abundant nutrition contained in the peanuts. Of note, Mr. Goodbar was named from a passing comment the bar received during the production process: “That’s a good bar!”

Mr. Goodbar is packaged in its classic yellow wrapper and red writing. Besides the standard-sized candy bar, Mr. Goodbar is also available in fun-size, mini, and giant-size options, as well as being featured in Hershey’s Miniatures Assortment bags. The primary ingredients in a Mr. Goodbar are milk chocolate, peanuts, and gelatin. A standard-sized Mr. Goodbar has 260 calories, 17 grams of fat, 23 grams of sugar, five grams of protein, and two grams of dietary fiber. Can you see why they were marketed as a meal replacement?

Introduced in 1957 by Nestle, Munchies are bite-sized chocolates with a caramel and biscuit center, kind of like Twix. Munchies come in two packaging options: a personal-sized tube in the shape of a candy bar and a shareable bag. In addition to the original recipe, Munchies also come in mint, cookie dough, salted caramel, and fudge brownie varieties. In 2020, Nestle also introduced a white chocolate variety of Munchies.

The main ingredients in Munchies include sugar, glucose syrup, milk powders, and cocoa butter. Finally, a serving of Munchies has 133 calories, six grams of fat, 15 grams of sugar, and one-and-a-half grams of protein.

The list of M candies really packs a punch. From iconic candies of yesteryear to mainstays aplenty, the M candies are a bunch of uber-popular and highly recognizable brands. Whether you’ve tried them all or not, chances are you’ve seen or heard of them. Just maybe you’ll draw some candy aisle inspiration from this marvelous list of confections.