As we near the end of the alphabet in sweet candy confections we arrive at a mix of classic and outlandish candies. From mouth-watering chocolate treats to spicy and obscure novelty candies, you’re in for a literal and figurative treat with the Y candies.

Yema is a homemade type of candy that’s popular in the Philippines. This sweet confection is said to have Spanish origins, thus its name which is a Spanish word for “egg yolk.” The main ingredient in Yema is egg yolk, although it’s also made with milk and sugar. Yema is a soft candy that is typically rolled into a ball or shaped into a triangle. Yema is a lovely golden color, is similar in texture to creme brulee, and has an intensely sweet flavor. Some common variations include the addition of nuts or rolled in granulated sugar. Though this is a popular homemade treat, it can be purchased from candy stores in the Philippines, however, it is not a branded candy.

Yorkie is a chocolate candy bar that was originally made by Rowntree in York, Pennsylvania; it was invented in 1976. The Yorkie is a hearty milk chocolate bar that was developed as an answer to Cadbury’s Dairy Milk bar. Today, the Yorkie bar is manufactured by Nestle and continues to uphold the integrity of its original recipe. A Yorkie bar is a plain milk chocolate bar that is composed of six connected, break-off chunks making it perfect for sharing.

A Yorkie bar is traditionally packaged in a purple foil wrapper with bold yellow lettering which is also similar to Cadbury’s packaging for the Dairy Milk bar. Besides the milk chocolate variety of the Yorkie bar, other flavors include Raisin & Biscuit and Duo Orange which is a bar of orange-flavored milk chocolate. The main ingredients in the original Yorkie are sugar, dried whole milk, cocoa butter, and vanilla. Lastly, a whole Yorkie bar contains 246 calories, 14 grams of fat, 26 grams of sugar, and three grams of protein.

This sweet and refreshing candy treat was invented in 1940 by the York Cone Company. In 1988, this iconic candy became part of The Hershey Company lineup. A York Peppermint Patty is a disc-shaped patty with a white, creamy peppermint filling that’s enrobed in a thin layer of rich dark chocolate. Just like the Yorkie chocolate bar, York Peppermint Patty was named for York, Pennsylvania, the city in which it was invented. A fun fact about this sweet confection is that there’s a holiday named for it; February 11th is National Peppermint Patty Day so mark your calendars.

Yowie is an educational candy (try to make sense of that) that was developed in 1995 by Cadbury and Kidcorp in Australia. In 2014, Yowie was introduced to US markets. Similar to Kinder Joy Surprise Eggs, Yowies are hollow chocolate shells that reveal a small surprise toy. Each Yowie toy is an animal indigenous to Australia or New Zealand with a few from Africa; the fun, and frankly genius marketing, of Yowies, is the joy of collecting all the animals. Some of the animals you could hope to crack in a Yowie include sea cucumber, wallaby, or eastern quoll among many others.

Yowies are packaged in colorful foil wrappers with an array of goofy-looking animals depicted on each. The main ingredients in a Yowie include sugar, whole milk powder, cocoa butter, and vanilla extract. Yowies are gluten-free, nut-free, and non-GMO while a serving includes 120 calories, seven grams of fat, 13 grams of sugar, one gram of dietary fiber, and one gram of protein.

Yum Yum Candy is a line of sweet and spicy candy created by a small business of the same name. The Houston-based candy company specializes in recreating popular candies with a twist. This line of candy features Skittle-, Gushers-, and Gummy Bear-like candies with divergent flavor profiles. Imagine a spicy, enchilada-flavored Skittle, hot Gushers, or a surprisingly tangy Gummy Bear and you’ve got Yum Yum Candies. Of note, Yum Yum candies are not a commercial brand of confections and nutritional information is not readily available. Nevertheless, Yum Yum Candies can be purchased online and are worth a try.

If you’ve never tried some of these Y candies, be on the lookout for them in your candy aisles. With the distinguished flavor profile of the York Peppermint Patty and the whimsical fun of the toy-filled Yowie, there’s something for adults and children alike on the Y list of candy. 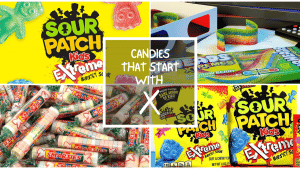 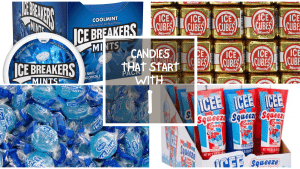