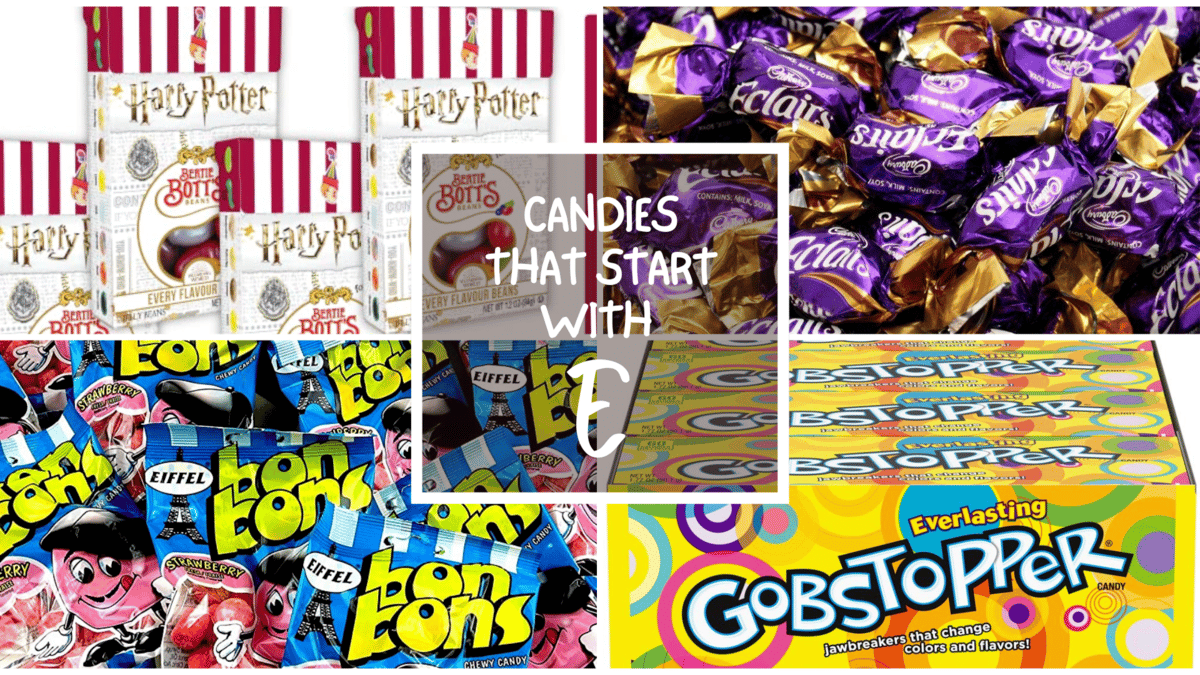 This small but mighty list of candies that begin with E truly packs a punch. From decadent to light and tart to unconventional, there are some really fun E candies to check out. Whether you’re here to work your way through the alphabet of candies or looking for the perfect candy variety for a themed event, you’ve come to the right place. Check out this list of uncommon yet upright E candies.

Invented by the Cadbury Company in 1932 in the UK where the manufacturer is based, these tasty chocolate treats are a relative to the company’s Dairy Milk bar. Eclairs look an awful lot like its counterpart, however, that’s where the similarities end. Eclair candies are chewy caramels that encase a creamy milk chocolate center. Each bite-sized candy is twist-wrapped in Cadbury’s iconic purple foil.

These candies are the perfect treat for a candy bowl at your next gathering or party. A single serving of Eclairs.

is five pieces; each serving contains 165 calories, six grams of fat, three grams of sugar, and four grams of protein though they’re not a noteworthy source of dietary fiber. Best of all, Cadbury Eclairs are gluten-free.

These chewy candies were invented by the Haribo Candy Company which is famous for its gummy candy varieties. Known for their fun and often offbeat shapes and flavors. Egg Gummies are certainly unconventional; though they look unnervingly like an actual fried egg, Egg Gummies are fruity in flavor. Although the unspecified fruity flavor is consistent throughout the “egg,” the “whites” are softer in texture than the “yolks.”

Furthermore, the primary ingredients in Egg Gummies include glucose syrup, sugar, dexatrine, and citric acid. Lastly, each serving of Egg Gummies includes 130 calories, 21 grams of sugar, and three grams of protein which is about half as much protein as an actual whole egg.

Eiffel Bon Bons originated in France and they’re an altogether unique treat. Each bag of these mildly sweet and tart candies depicts, you guessed it, the Eiffel Tower and a mustachioed, beret-donning Frenchman in the shape of an Eiffel Bon Bon. Unfortunately, the candy’s name doesn’t reveal much about what it actually is as “bonbon” simply translates to candy in French. So, what the heck are Eiffel Bon Bons? Essentially, these bite-sized confections are a soft and tangy taffy-like center surrounded by a subtly harder outer layer.

Eiffel Bon Bons’ original flavor is strawberry, though they’re also available in sour apple and caramel varieties. Eiffel Bon Bons are loose-packed in a plastic bag which typically contains about 30 pieces. Of note, Eiffel Bon Bons’ primary ingredients are sugar, wheat syrup, water, coconut oil, and gelatin. A serving, which equates to about three candies, has 140 calories, two grams of fat, and 22 grams of sugar.

These funny bubble gum cigars really bring you back to the anything-goes days of the 80s. Though it was created by Fleer Candy Company in 1928, El Bubble is now manufactured by Tootsie Roll Industries. El Bubble cigars come in packages of 36 cigars, each of which looks uncannily like an actual box of Cuban Cigars. Humorously, these candy cigars are a spin on the congratulatory sentiment of gifting a box of real cigars.

The two most popular varieties are a blue box announcing “It’s A Boy” and a pink box conversely announcing “It’s A Girl.” Two other nameless varieties are less specific and can be enjoyed for any occasion. Notably, El Bubble comes in a variety of flavors including Orange, Grape, Strawberry, Banana, Mint, and Fruit. El Bubble is made of common bubble gum ingredients including sugar, gum base, corn syrup, artificial flavors, and soy. Last but not least, an El Bubble cigar contains 70 calories and 14 grams of sugar per piece.

Despite their disturbing name, Electric Eel Candy is a fun, sweet treat to try out. Though the history of Electric Eels is mysterious, they’re said to have originated in Japan. Packaged in what appear to be test tubes, Electric Eels are akin to nerds in shape and size and don’t actually look like eels at all. Electric Eels are solely available in sour apple flavor and the packaging claims that they’ll “electrify your mouth.” Sounds thrilling! Finally, even though Electric Eels can be purchased online, manufacturing, recipe, and nutrition information is mystifying.

Not only are these Elephant Gummies incredibly adorable, but they’re, wait for it, vegan! Launched by Squish Candies, a Canadian-based candy company in 2020, the bite-sized Elephant Gummies are entirely plant-based; the recipe swaps gelatin, which is animal-based and typically found in gummy candies, for pectin which is cruelty-free. The sentiment behind making these vegan candies elephant-shaped is a sweet one: because elephants thrive on a plant-based diet, it seemed fitting to Squish Candies that these vegan gummies take the shape of an elephant.

In addition to pectin, the gummy base, Elephant Gummies are made with real fruit juices and come in flavors such as passion fruit, goji berries, and kiwi to name a few. Lastly, every serving of Elephant Gummies, which amounts to approximately 10 pieces, contains 140 calories and 22 grams of sugar, though they’re not a noteworthy source of fat, dietary fiber, or protein.

English Toffee is a type of candy and not a brand therefore many manufacturers distribute this sweet confection. The biggest distributor of English Toffee happens to be Elaine’s Toffee Company which ships its products all over the world. Their toffee brand sells nugget and bar varieties, the bar being the most popular. A single English Toffee bar has 230 calories, 17 grams of fat, 16 grams of sugar, two grams of protein, and one gram of dietary fiber.

Though you’re far from the final letter in the alphabet of candy, you’ve sadly come to the end of the E list. Each of the candies noted herein is unique in its own right. For each selection, there’s the perfect pallet. Whether these candies are old hat or new and intriguing, you’re encouraged to try out a few of them. You might surprise yourself and find your new favorite sweet. 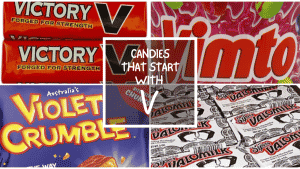