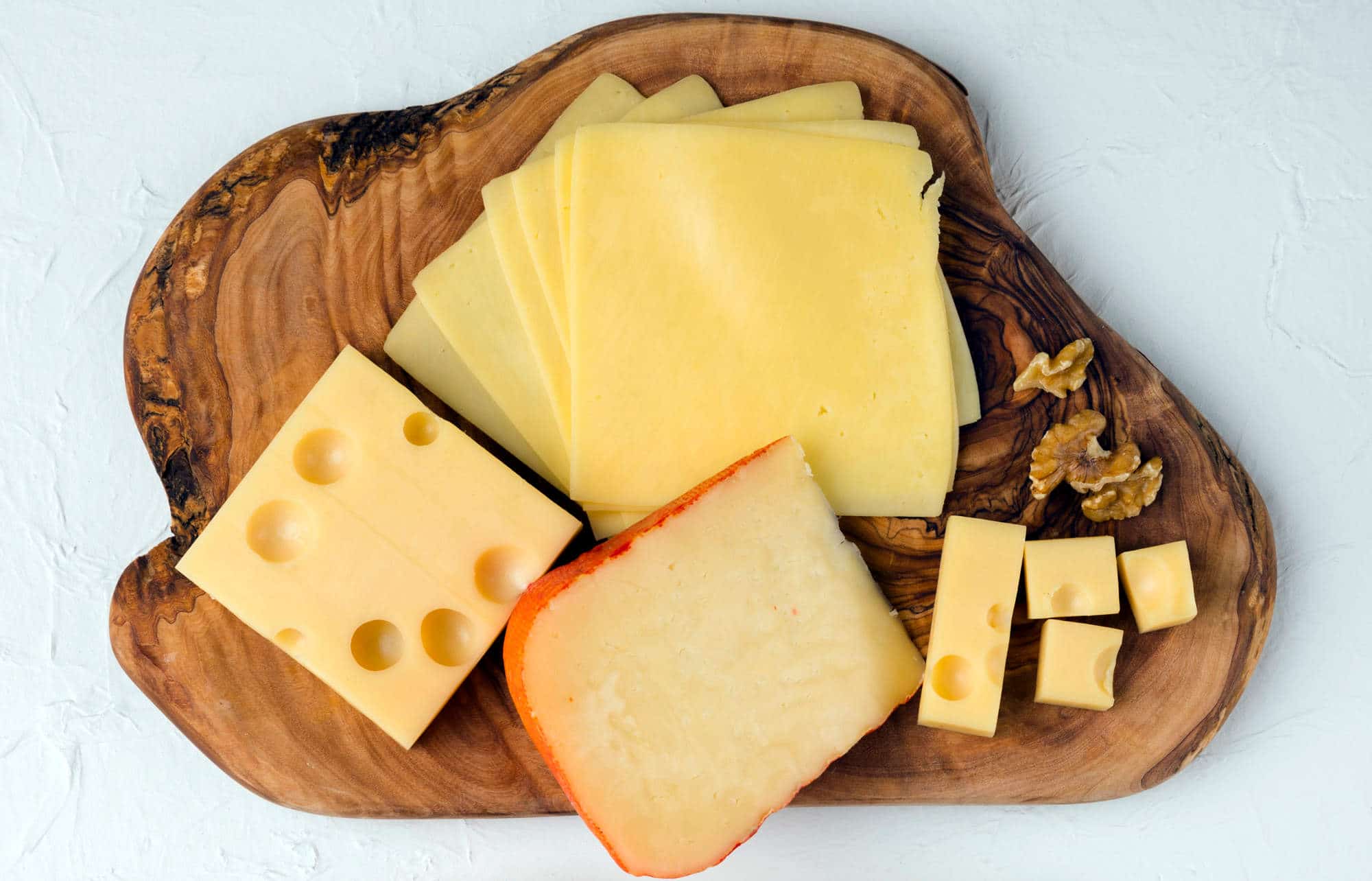 Gouda, Holland’s most famous cheese exported worldwide, is a versatile staple enjoyed by millions of people daily. It may, however, be necessary or even preferred, at times, to seek a worthy substitute.

There are readily available substitutes for Gouda, a semi-hard mild, buttery, and slightly nutty-tasting cheese made from cow’s milk. These cheese alternatives, like Gouda, are great for grilling, baking, or simply as a tasty snack.

Widely regarded as either in first or second place in terms of popularity and consumption, you may not be, for whatever reason, in a position to get your hands on Gouda. So what are the alternatives?

Why Substitute A Gouda?

Whether cooking, baking, or just enjoying it as is, replacing one ingredient with another is not going to give you an exact match, and cheese is no exception. With a bit of research and an understanding of the characteristics of cheeses, and Gouda, in particular, you should be able to at the very least get a close match which will not disappoint when presenting your finished product.

There are no particular reasons to expect the supply to dry up in any region that regularly sees abundant Gouda stocks on supermarket shelves. But that is not to say that it is not possible. It has happened before and is bound to happen again.

If you are a lover of that British sandwich spread staple, Marmite, then you’re possibly already aware that there is currently a worldwide yeast shortage due to the closure of factories because of Covid-19. And yeast is an essential ingredient of Marmite spread.

If it happens to Marmite, it can happen to cheese.

Gouda can also be a little hard on your pocket. It is, after all, primarily an imported cheese and, therefore, seldom one that’s advertised as a budget beater. And it wouldn’t be unfair to assume that a cheese calling itself Gouda at your local corner grocer is anything but an inferior imposter.

You could well be one of those rare types that don’t like the taste of Gouda, or you have lactose intolerance. If you follow a vegan diet or cater to someone who is a vegan, then a plant-based alternative might be your only option.

So if your favorite Gouda is hard to come by or you’re just seeking a cheaper substitute, what are your options?

Worthy Contenders For A Gouda Replacement

Here are a few kinds of cheese that are all reasonably easy to get in hand and their uses when replacing a gouda:

Muenster Cheese As A Substitute For Gouda

A cow’s milk alternative, Muenster is an easy replacement choice for Gouda because, like Gouda cheese, its flavor intensifies with maturation. The American Muenster described here should not get confused with the German or French varieties, which are different.

Semi-soft and pale yellow color with an orange rind, it also has a similar mildly strong aroma and a sweet, nutty taste resembling Gouda.

Muenster cheese is usually cheaper and readily available in grocery stores and versatile when replacing your Gouda cheese. It is a great grilling and melting cheese. It is also an excellent choice served as is.

Cheddar Cheese As A Substitute For Gouda

It’s a safe assumption that Cheddar is the most popular cheese globally, at least so in many anglo-Saxon countries. It accounts for over 50% of the market in the UK. 10lb of this famous delicacy is consumed per capita in the US, second only to Mozzarella.

Cheddar cheese probably sees one of the most incredible varieties of quality and style and even has some processed cheeses using its name.

Also pale yellow to orange in color and with a nutty sharp flavor made from cow’s milk, it is pretty crumbly in texture and matures well with age. Although there are even white Cheddar variants on the supermarket shelves, the yellow-orange type closely resembles a Gouda.

Due to its higher fat content than Gouda, it’s an excellent grilling and melting cheese. Your cardiologist might not be pleased, but your kids almost certainly will be overjoyed.

Monterey Jack Cheese As A Substitute For Gouda

A native Californian cheese, Monterey Jack, can be traced back to the wild west of the 18th century. Franciscan friars of Spanish colonial origins were the original “fathers” of this American farmer’s classic.

Several marbled variations are often available in most grocery store aisles, including Cheddar-jack, Colby-jack, or a Pepper-jack, which contains herbs and hot peppers or chilis. There’s even a Dry-jack derivative that is a matured, more rigid style.

Pale and semi-hard, the Monterey Jack is usually creamier and firmer than Gouda, making it an excellent compact snacking cheese or for sandwiches and with crackers and olives.

Best uses for Monterey Jack: pairs well with a bowl of olives and a glass of Pinot Noir. With crackers or bread and a good choice for making Quesadillas.

Havarti Cheese As A Substitute For Gouda

As with most Gouda substitutes, Havarti cheese is also made from pasteurized cow’s milk. This semi-soft cheese is a staple in Denmark. It was previously known as a danish version of the german “Tilsiter” and is sometimes called “cream Havarti.” However, it can be a bit pricier than Gouda, and it is nonetheless similar to Gouda.

Aged for a relatively short three months, it has a pale yellow or whitish color and is mild tasting with a slightly sweet and nutty flavor due to its washed-curd production process. Havarti is a rindless cheese and contains irregular openings called eyes.

It’s also very creamy and comes in various varieties infused with herbs and spices such as dill, garlic, caraway seed, and basil.

Havarti pairs well with some wines and fruits and therefore makes an excellent table cheese.

Gruyere Cheese As A Substitute For Gouda

Classified as an Alpine or Swiss-type cheese, this dense, complex derivative with a pale yellow color named after the Swiss town of Gruyeres, Switzerland is a complex cheese that varies in taste as it matures. It’s available in most reputable grocery stores.

Gruyere cheese starts off tasting nutty and creamy in its youth. This salty yet somewhat sweet cheese develops into a more earthy yet assertive taste as an adult and is regarded as one of the best cheeses for baking. Its mild undertones blend well into soups, quiches, and pasta dishes. Gruyere is a cheese of choice for Swiss-style fondues, which makes it a great entertainer’s cheese.

Both the Swiss Gruyere and its French counterpart have protected production status.

Edam Cheese As A Substitute For Gouda

With its origins rooted in the town of Edam in Holland, it is a hardy traveler’s cheese that hardens as it ages yet never spoils. Pale yellow is traditionally sold in a flat-ended sphere, enveloped by a rind made of paraffin wax.

Its semi-hard texture and a flavor that deepens as it matures gives it a character similar to Gouda. Edam has a relatively low-fat content making it a preferred choice for breading and frying as a delicacy in the Czech Republic and Slovakia. It is typically served with a dollop of tartare sauce or mayonnaise and fries.

Best uses for Edam: as with Gouda, both young and mature Edam pair well with fruits such as apples and pears, white wines, or as is with bread or crackers.

American Colby As A Substitute For Gouda

Colby is yet another American cow’s milk cheese and is produced similarly to Monterey Jack. Colby, however, has annatto added which gives it a different flavor.

Colby is a washed-curd cheese, which results in a sweeter, milder, and softer cheese with a light to bright orange color. The lighter ones tend to resemble a gouda more closely.

Do not use the Colby as a replacement if your recipe calls for an aged gouda. Colby cheese does not age well as it tends to dry out reasonably quickly.

Best uses for Colby: great for grilled cheese sandwiches, burgers, and casseroles. It pairs well with most fruits.

Although made from various animals such as cow, goat, or sheep, the most popular cheese in the US, Mozzarella is not typically seen as the best substitute for Gouda cheese unless you are looking for a young, less pungent Gouda variety.

Mozzarella in its natural form is soft, milky, and often creamy and does not substitute the nutty, stronger character of a more mature Gouda. However, the exception is smoked Mozzarella, which has a denser, firmer texture and more closely resembles the taste and texture of a smoked Gouda.

Feel free to experiment with a smoked Provolone instead.

Cheeses that resemble Gouda may not necessarily be the ideal substitute. Consider these factors when selecting an alternative for Gouda.

Not All Brands Are Created Equally

Although cheeses branded as Gouda, Cheddar or Gruyere, or any other should all, by definition, taste and look the same, that is seldom the case. Each brand follows its individual manufacturing guidelines and processes and uses its own list of ingredients.

These essential ingredients do not all come from the same source. They will, therefore, seldom possess the same characteristics that will influence the taste and texture of your cheese.

Climatic and temperature differences can affect the outcome. The change in season could affect the milk used for the cheesemaking process, even for the same cow.

Environmental conditions influence the outcome, such as temperature and humidity.

Specific production processes all influence the outcome. Where the cows come from also plays a role.

The type of feed that a milk-producing cow receives may be different from cows’ feed on a neighboring farm.

Also, different regions or cultures have unique flavor preferences in their cheeses and create a specific process to replicate those flavor profiles.

Most good supermarkets and grocers have cheese counters and will let you sample before buying, so ask the shop assistant if you’re unsure before committing.

Freshly made cheese usually tastes pretty bland and very salty, as it is the ripening or aging period that helps the flavor develop and mature. As cheese ages, microbes and enzymes break down the casein proteins, changing the texture and intensifying the Flavour of the cheese.

Ripening conditions are carefully controlled, with different temperatures and humidity levels affecting the rate of ripening, loss of moisture, and rind formation.

The ripening period can be anything from several days to two years or more. As the ripening period progresses, the cheese loses more moisture, develops a more robust flavor, and becomes harder and more crumbly in texture.

Therefore, it is of cardinal importance to understand that a six-month matured cheese will not taste like one that has been matured for 12 or even 18 months.

Fat has an essential sensory role in dairy products, contributing to both flavor and texture, and thus, technological difficulties can occur when levels are reduced.

Cheeses like Cheddar and Mozzarella become firmer and more rubbery with fat removal because of increasing protein content.

Cooking any cheese will separate the fat from the cheese, thus affecting the outcome of your dish. Fat content is an essential factor when selecting a Gouda alternative. Through that same factor, the cheese tastes similar and behaves in a specific manner when heated through cooking or baking.

Feta cheese will never behave the same way as a Gouda or Cheddar because it has a far lower fat content. Although the cheeses presented in this list have similar fat content to Gouda, their physical characteristics can vary greatly when heated, affecting your result.

Other Factors To Consider

Sourcing an appropriate substitute for a gouda cheese should not present too much of a challenge. Hopefully, the particulars provided in this article will help in making the right choice. 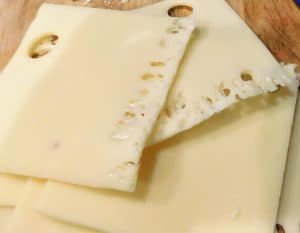 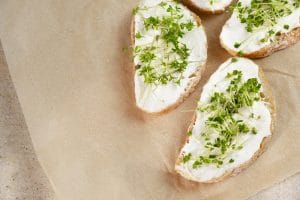 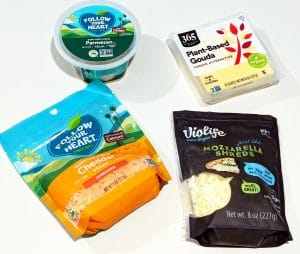 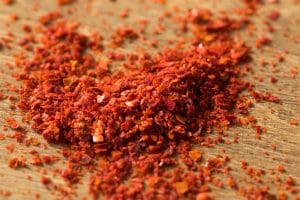 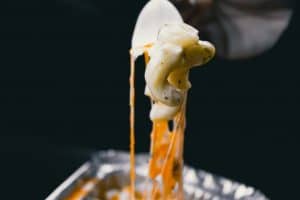 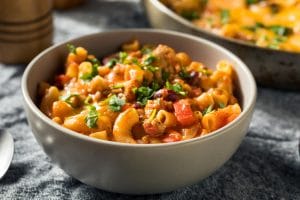