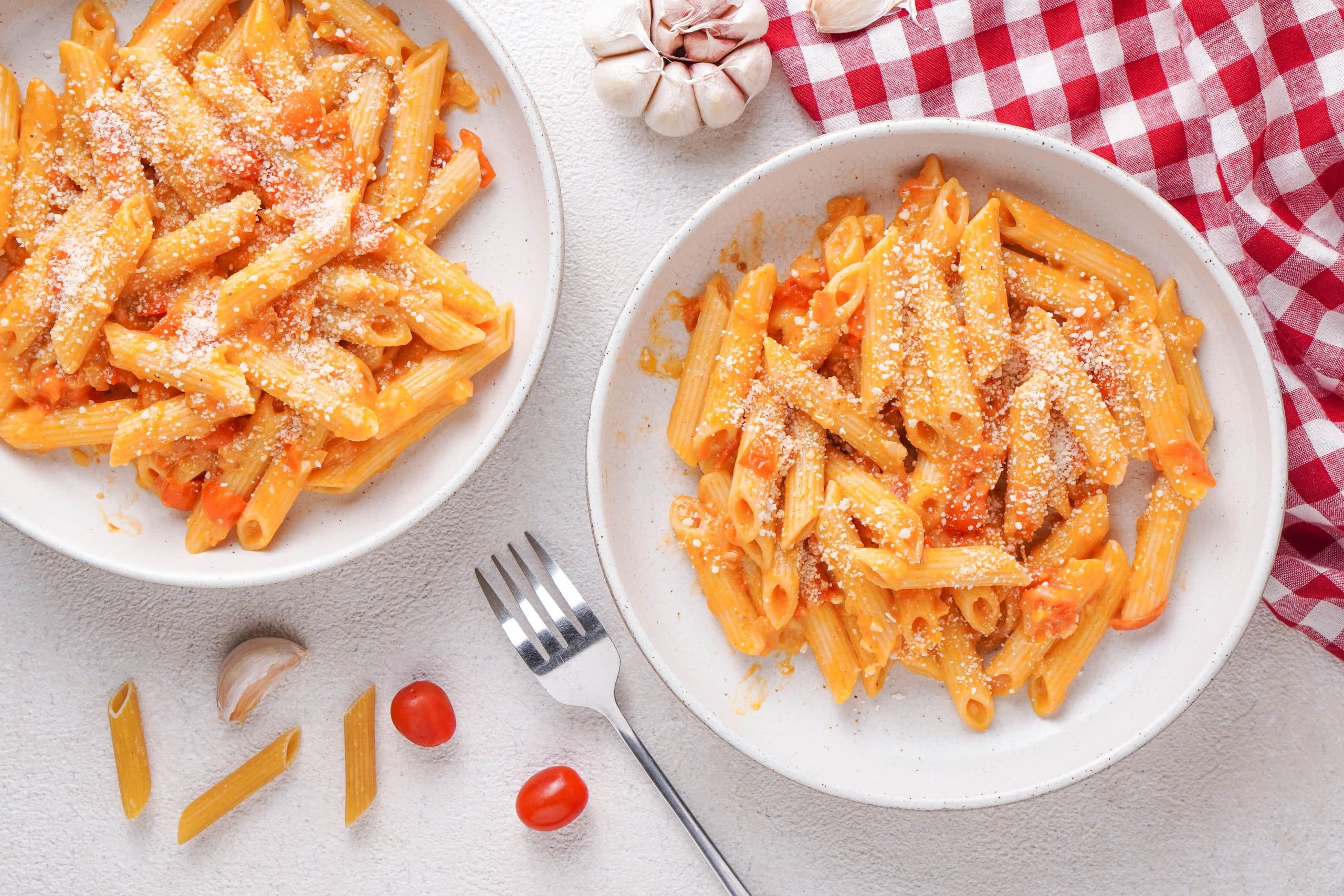 Vodka pasta or penne a la vodka is usually made with penne rigate, tomatoes, herbs, vodka, and cream. But don’t worry, you can’t taste the alcohol in the sauce. The cooking technique ensures the vodka evaporates so that you or your guests don’t get drunk. At least not from the pasta. This rich & spicy vodka sauce pasta recipe takes a twist on the original recipe by adding chili paste. The spicy and flavorful harissa really makes this sauce come together. But you can use your favorite chili paste to create a unique spicy penne a la vodka recipe. 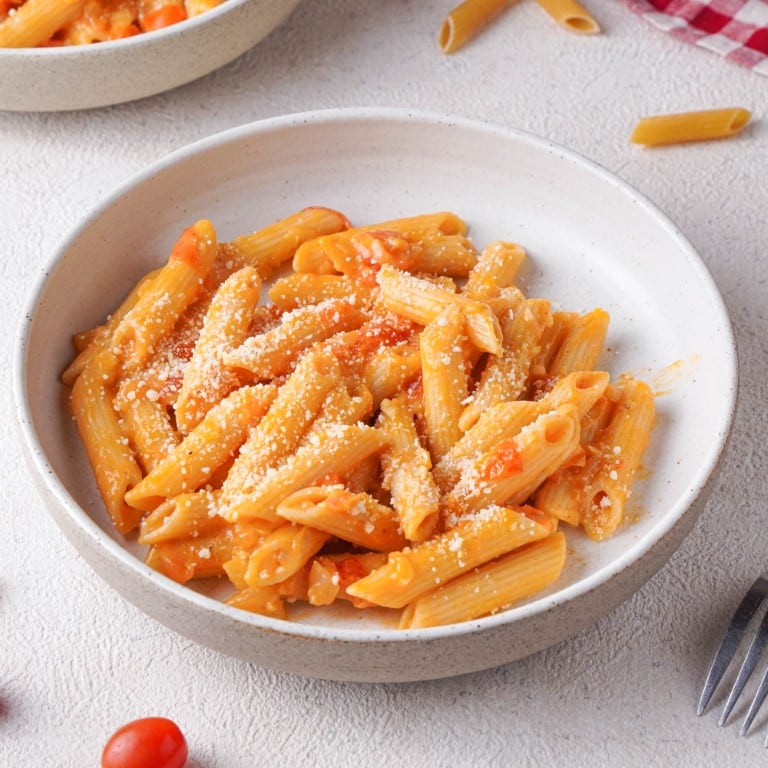 If you don’t have tomato paste, you can use canned chopped tomatoes. In this case, increase the amount to 3 tablespoons and reduce pasta water to 2 tablespoons. And, as mentioned before, you can replace harissa with your favorite chili paste. Don’t forget to take the sweetness level into account and reduce or omit the sugar if necessary. You don’t want your rich and creamy vodka sauce tasting like ketchup. Add as much chili paste as you wish to make this rich and spicy vodka sauce pasta as hot as you desire.

To make this recipe vegan, substitute vegan cream for the heavy cream, and vegan parmesan cheese for the parmesan. Of course, it won’t taste the same, but the result can be delicious in its own way. I find that coconut cream pairs nicely with tomato sauce. If you’re adding nutritional yeast instead of parmesan cheese, go easy on it. Normally, 2 teaspoons are enough.

Vodka, on the other hand, can’t be replaced by any other alcohol. Vodka works thanks to its neutral taste. If you add rum, it’ll taste like rum, if you add gin, it’ll taste like gin. So, unless you want an alcoholic pasta dish, don’t substitute the vodka. Besides, how would this be a vodka sauce without vodka? Just remember to evaporate the vodka well so that you don’t feel like you’ve taken a shot with every bite.

To make this recipe low-fat, reduce the amount of EVOO and substitute light cream. But I highly recommend putting your calorie counting aside and making this recipe as rich as it’s supposed to be. Your taste buds will be happy which means you’ll be happy. And don’t forget that happiness is good for you.

Where Is Penne A La Vodka From?

Before checking the history behind penne a la vodka, I’d already imagined an origin story of my own. I’m pretty sure this recipe was invented by a young guy with too many alcohol bottles in his cabinet. He used to host a lot of house parties and guests would always leave their half-drunk alcohol bottles behind. Then he got into a relationship and throwing parties wasn’t relevant anymore. But he had to do something with all those half-empty bottles of liquor, right?

He was making pasta one night when his girlfriend started going through the liquor bottles and asking what they were going to do with them. In a moment of inspiration, he took a bottle of vodka and splashed a few shots into the pasta sauce. His girlfriend was in shock and said: “eww, you’ve ruined the pasta!” But after tasting the final creation they were both pleasantly surprised and decided to popularize this dish. The actual origin story is a bit different.

Many people claim to have invented penne a la vodka. The first was a chef by the name of Luigi Franzese who worked at Orsini Restaurant in New York back in the 1970s. His daughter claims that, supposedly, he needed to thin a sauce and added some vodka from his flask to do so. The second claim coming from the United States is that a university graduate named James Doty invented penne a la vodka in the 1980s. But there are also two chefs in Italy who say they were the first creators. In his cookbook, Chef Pasquale Bruno Jr. said that this saucy pasta dish comes from Bologna, Italy. While another cookbook claimed that it was a chef in Rome who popularized this dish to promote a new brand of vodka. But, whatever the origins of this famous pasta dish may be, its popularity is undeniable. 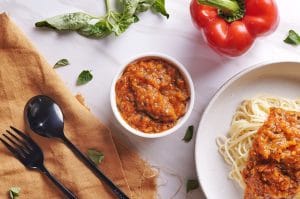 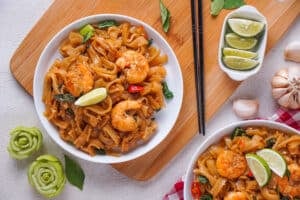 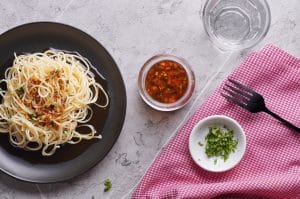 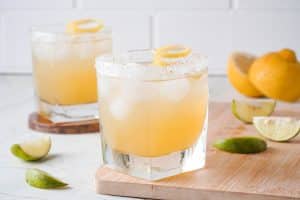 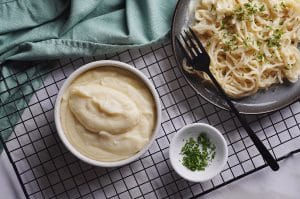 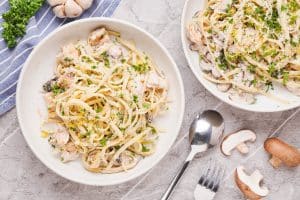