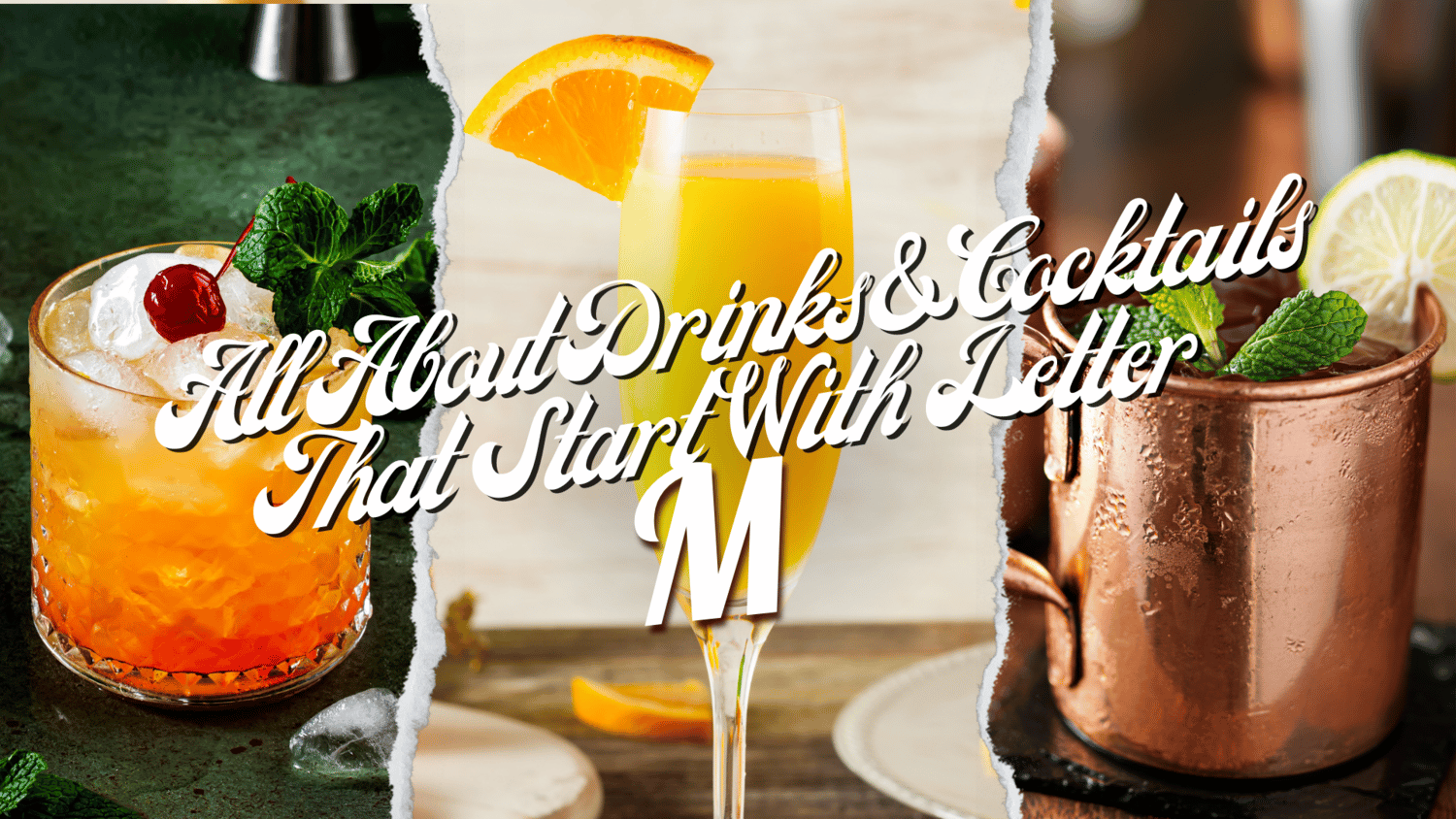 Whether you’ve ever had the pleasure of sipping a Mai Tai, surely you can conjure an image of the fruity punch drink complete with a paper umbrella garnish. The Mai Tai was created by a bartender known as Trader Vic in the 1930s. In the 1950s, the recipe for this cocktail made its fateful trip to Hawaii where it became one of the state’s most popular concoctions. A Mai Tai is a fruity rum punch made with light and dark rums as well as orange curacao, orgeat syrup (an almond syrup), and fresh lime juice; it’s served over ice in a tall glass. On the surface, it looks like a harmless cocktail, but beware that there’s very little juice diluting the high alcohol content of this drink. Lastly, the Mai Tai is commonly garnished with fresh mint leaves and a lime wheel.

The Madras is a simple yet classic cocktail that dates back to sometime in the mid 1940s. A much-loved, fruity cocktail, the Madras is easy to make by the pitcher to serve a crowd and it’s also the perfect brunch beverage. The Madras builds upon the Cape Codder, which is made with vodka and cranberry, by adding orange juice to the mix. The orange juice adds a burst of citrus to the tart cocktail. A Madras is served over ice in a highball and is traditionally garnished with a lime wheel.

Like with many cocktail recipes, there’s some disagreement about the origins of the Manhattan. The prevailing theory, however, is that the drink was invented in the late 1800s as a special drink honoring Lady Randolph Churchill (Winston Churchill’s mother) at a Manhattan Club party where she was the guest of honor. Nevertheless, the Manhattan has stood the test of time. Over the many years since its creation, the recipe for a Manhattan has evolved a bit. Today, a Manhattan is made with whiskey, sweet vermouth, and a dash each of bitters and orange bitters. The ingredients are cold-shaken and strained into a chilled coupe glass. The Manhattan can be garnished with a cherry or lemon twist depending on your preference.

Interestingly, the Margarita was created in the 1940s as a nod to Rita Hayworth whose birth name was Margarita Cansino. The Margarita has remained a popular summertime beverage ever since its creation. It’s also commonly paired with Mexican and Tex-Mex cuisine. A Margarita is a mix of tequila, orange liqueur, lime juice, and sour mix. It can be served over ice in a highball or blended into a frozen drink in a margarita glass. A Margarita is always garnished with a lime wheel and the rim may be salted or not. Lastly, the Margarita is the subject of many spinoff recipes such as fruit-infused Margaritas, the highfalutin Top Shelf Margarita, and beyond.

Like the Manhattan, the Martini’s origins are much-contended. The most likely origin of the classic Martini was at Manhattan’s famed Knickerbocker Hotel in 1911; supposedly, the drink was specially devised for billionaire John B. Rockefeller. Nevertheless, a Martini is a simple and sophisticated drink made with gin and dry vermouth cold shaken and strained into a chilled martini glass then garnished with an olive or lemon twist. Popular variations of the standard Martini include the substitution of vodka for gin and on the rocks instead of straight-up. Furthermore, like the Margarita, the Martini is also the subject of a wide array of recipe spinoffs.

Historically, there were two variations of the Matador, a tequila-based cocktail. The first, originated in the U.K. in the mid-1930s, while the second, and more popular variation, hailed from “Trader Vic’s Bartender’s Guide” which was published in the early 1970s. The Matador has a similar constitution as the Margarita. It’s made with tequila, lime juice, and sour mix like the Margarita, except it substitutes pineapple juice for the orange liqueur. The pineapple juice makes the Matador more punch-like, sweeter, and a bit less strong than a Margarita. A Matador is served over ice in a chilled collins glass and garnished with a pineapple wedge.

Another fun addition to the Sour family of drinks, the Midori Sour is a fruity drink that goes down super smoothly. In fact, you can’t even taste the liquor in this drink; as such, it’s a popular drink among new drinkers who can’t quite handle the hard stuff yet. Made with Midori, a neon green melon-flavored liqueur, and sour mix, the Midori Sour is as fun to look at as it is to drink. The Midori Sour is served in a collins glass and garnished with an orange wheel and cherry. Just like Midori itself, the Midori Sour is a child of the 70s.

The Mimosa is a brunch staple that was popularized in the mid-1920s; it has its roots in Paris’s Ritz-Carlton Hotel. Notably, Alfred Hitchcock is credited with catapulting the cocktail into mainstream popularity. A traditional Mimosa is simply made with equal parts champagne and orange juice, though it’s also common to prepare one with just a splash of juice. Mimosas are served in champagne flutes. They are a great party drink; simply set out your glassware, champagne bottles, and a juice pitcher and guests can easily help themselves.

A Mind Eraser is a wild cocktail with one purpose: to induce drunkenness. A Mind Eraser, as its name suggests, is a party drink that was popularized among college students in the 1980s. A Mind Eraser is made by layering coffee liqueur and vodka in a highball and topping it with club soda. The drink is prepared over ice and served with a big soda straw. The Mind Eraser isn’t made for sipping, instead, you’re supposed to suck the drink back, in its entirety, as fast as you can, thus erasing your mind.

The Mint Julep, best known in the U.S. as the Kentucky Derby’s signature cocktail, actually has European roots. In fact, the first mention of the Mint Julep in history books is as a European or Middle Eastern herbal remedy. Today, however, the Mint Julep is a spirited cocktail concocted of mint leaves muddled in simple syrup with bourbon and bitters. The Mint Julep is mixed over ice in a rocks glass and garnished with a mint sprig. A Mint Julep is delicate and refreshing and the perfect summer drink.

Despite its name, the Missouri Mule isn’t a derivative of the Moscow Mule as it lacks ginger beer, a mainstay of Mule drinks. Instead, the Missouri Mule is named for the midwestern state’s state animal: the mule. A Missouri Mule was actually made in honor of President Harry S. Truman whose home state was Missouri. The Missouri Mule contains bourbon, Applejack, lemon juice, Campari, and orange liqueur. The ingredients are cold-shaken and strained into a chilled coupe glass.

Though the origins of the Mojito are unclear, it is a classic Cuban cocktail that you have to try at least once in your life. Cool, refreshing, and not too sweet, it’s the perfect blend for stimulating your taste buds. Though there are many variations of the Mojito, many of them fruity variations, the classic Mojito is made with muddled fresh mint, white rum, simple syrup, lime juice, and soda water. It’s served over ice in a highball and garnished with fresh mint leaves. The Mojito is a wonderful summertime drink when fresh mint is in season.

Created in 1941 by a woman who had emigrated to the U.S. from Russia with 2,000 copper mugs in tow, the Moscow Mule is aptly named. Moscow for the vodka which shines in the cocktail’s recipe and Mule for the woman who buggy-lugged the mugs such an epic distance. In recent years, the Moscow Mule has become an ever-popular summer drink because of its frosty temperatures and refreshing makeup. Of note, a Moscow Mule is made with vodka, ginger beer, and lime juice. It’s traditionally served in a hammered copper mug over ice and garnished with a lime wheel.

The Mudslide, a dessert cocktail, originated in Grand Cayman Island in the 1950s. A bartender by the name of Old Judd is credited with its creation; the drink remains the island’s signature beverage. Today, however, the Mudslide is a popular drink in chain restaurants and island-themed bars all over the U.S. A Mudslide is a blend of Irish cream, vodka, and coffee liqueur; the ingredients are shaken in ice and strained into a chilled coupe glass. Finally, a popular variation of this cocktail is the Frozen Mudslide which blends the ingredients in shaved ice, the result of which tastes like a milkshake.

Mulled Wine was created in the 2nd century by the Romans, so to say this cocktail has staying power is an understatement. Mulled Wine is a spiced red wine that can be enjoyed hot or cold. It’s commonly enjoyed during the winter months and is especially popular around Christmas. Mulled Wine is a mix of red wine, brandy, oranges, honey, cinnamon sticks, anise, and cloves. The ingredients are simmered in a pot over low heat allowing the ingredients to perfectly amalgamate. The finished product can be served hot in your favorite mug or over ice in a tall glass. An expert tip is that Mulled Wine can even be made well in a slow cooker.

Another of many elegant 1950s cocktails to come out of London’s Savoy Hotel, the My Fair Lady is attributed to the legendary bartender, Joe Gilmore. Developed as an homage to Julie Andrews’ debut in the musical “My Fair Lady,” The My Fair Lady is a simple mix of gin, lemon juice, orange juice, and egg whites. The contents of this drink are vigorously shaken in ice and strained into a chilled coupe glass. Lastly, it’s customary to garnish the My Fair Lady with a zesty orange peel.

Though sequentially, the M cocktails fall in the middle of the alphabet, many of the cocktails reviewed herein are the starting point for so many other wonderful drinks. If you’ve ever tried a Blue Margarita or a Cosmopolitan, you owe it to history to try their base recipes, the classic Margarita and Martini. The same is true for many other M drinks. Which will you try next?