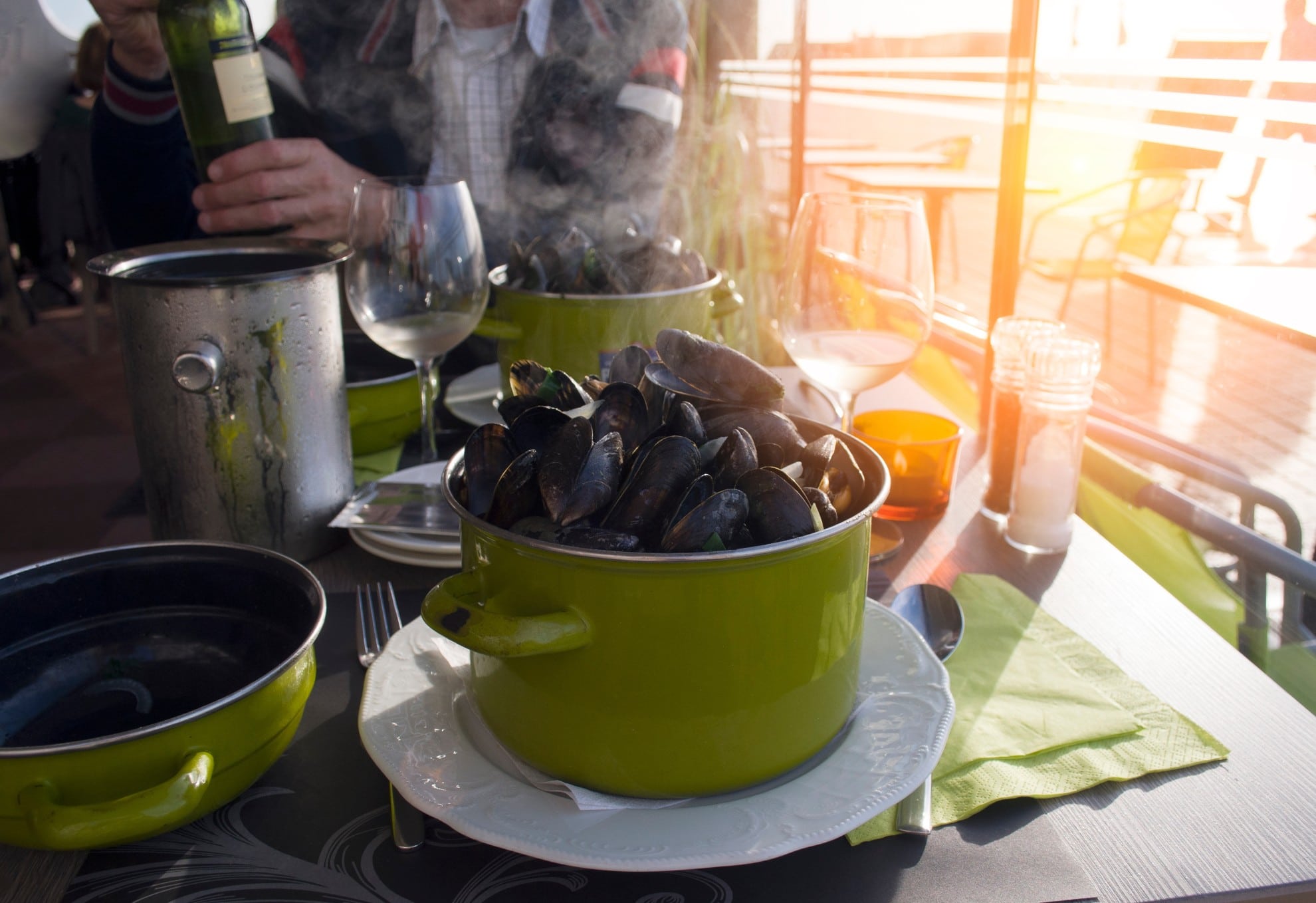 Seafood is loved around the world for its irreplaceably fresh flavor and healthy fortification of long chain omega-3 fatty acids, protein, iodine, Vitamin D and iron. After all, there is a very good reason that sea mussels occupy roughly 6.9% of all species produced in world aquaculture. Out of the many varieties, green and black mussels arise as popular favorites. Let’s take a closer look at these two closely related species of filter-feeders, breaking down a complete comparison of green mussels vs. black mussels.

One of the most heated debates and most controversial points of confusion is which tastes better, green or black mussels? Your personal taste and the flavor profile of your recipe will determine which is the best. Some recipes call for the mild taste of green mussels, and cases like this, black simply won’t work right. The same goes the other way round, vice versa. With this cleared up, let’s break down the specific differences.

Green mussels can refer to either the Asian green mussel, Perna Viridis, the native New Zealand green-lipped mussel, Perna canaliculus, or the species Perna Perna cultivated off the coast of Africa. For the purpose of this comparison, we’ll be evaluating the highly sought-after Greenshell mussel known locally to New Zealanders as Kuku.

Green mussels are easily identifiable by their distinctive green lip and brownish-green shell. Each mussel begins with a shell with a brown hue, shifting and growing to green at one side while becoming a brighter green towards its broad lip—dark-brown ridges across its surface mar the shimmering green color.

Farmed New Zealand green mussels can grow up to 6-inches in length at their largest. However, most commercially farmed varieties are harvested at approximately 4-inches in size.

After the initial collapse of the mussel farming industry in New Zealand during the 1960s due to overfishing by dredging, sustainable farming practices have been set up. Lines are suspended from a floating barrage off the coast of Marlborough, Golden Bay/Tasman Bay, Coromandel, and Stewart Island. Young green mussel seeds, or spats, settle on the lines. After approximately 15 months of growth in nutrient-rich waters, the green mussels are harvested. Those that are too small are returned back to the ocean in commercial mussel farms.

The umami ocean freshness of black mussels is far less prominent in green mussels. The savory quality is subtle, leaving less of an aftertaste while carrying a satisfyingly strong seafood flavor without becoming sharp and overly intense. Expect a pervading sweetness that’s sweeter than the black variety and a milder taste overall. An accurate comparison would be a flavor that’s akin to shrimp without the salty, fishiness of something like an oyster or clam. Overcooking destroys most of the sweet, complex depth of flavor you’re looking for.

Expect a spongy, fleshy texture that’s meatier and firmer than a black mussel. Many opt for green mussels when they’re looking for a consistency that remains firm and tender without cooking mushy and breaking apart. New Zealand green-lipped mussels have the most body while and are the most tender out of all varieties. Beware not to overcook as all mussels become chewy if improperly prepared.

As a mussel native to New Zealand, there’s lower global availability. Stock relies on import availability while hinging heavily on local demand. You can find green-lipped mussels in most countries if you look hard enough, but they’re noticeably scarcer than black mussels.

You can’t find green-lipped mussels cultivated anywhere else in the world other than New Zealand, which makes them far more expensive than black mussels but still arguably affordable nonetheless. Shoppers in the USA are looking at around $6 to $8 per pound for imported green mussels.

Like any other bivalve mollusk, green mussels must be washed and cleaned first, with care taken to remove the poop sack cleanly and completely. Many chefs opt to soak their mussels for fifteen minutes before giving them one last clean. This dislodges any sand or dirt that may still have been attached. Steamed is the preferred manner of cooking, but mussels can be sauteed, fried, or roasted as well.

Black mussels are all a part of the Mytilidae family of bivalve mollusks. Despite several species being involved in global aquaculture and farming, black mussels are generally grouped and collectively referred to as black mussels regardless of the type.

There are three main varieties of black mussels farmed, and all are closely related in almost every way – Choromytilus meridionalis, Mytilus trossulus, and Mytilus galloprovincialis.

Black mussels found on the West and Southern coasts of South Africa are called Choromytilus meriodionalis. Mytilus galloprovincialis or the Mediterranean mussel are black mussels native to the Mediterranean and northern Africa but are also found in the Pacific, Japan, North Korea, and Russia. The Bay Mussel, Mytilus trossulus, is native to the North Pacific and widely found in the Arctic and along the Alaskan coastline. Incidentally, Bulgaria has the largest Mytilus trossulus farm in Europe.

Black mussels are instantly identifiable by their black ridged shell that will range in intensity from a deep, dark brown in certain areas to predominantly shiny black. Blue mussels, or Mytilus edulis, and black mussels are not the same species and should not be confused. Wild-caught black mussels will exhibit a weathered shell with erosion marks, while farmed mussels are extremely shiny.

It is hard to tell the difference between black mussel species based on the shell alone. However, Choromytilus meridionalis has black to bluish flesh. Mediterranean male mussels have white or creamy white flesh flesh while the females are orange. Bay mussel flesh is also white and orange for male and females, respectively, but the hues are brighter.

Most black mussels, regardless of the variety, average 2 ½ inches long, but the largest can reach up to over 4 ½ inches when left to grow.

Just like New Zealand’s Greenshell mussel farming, most of the world’s black mussel farming also uses long-line techniques. Young mussel seed called spats settle naturally on the lines. After a period averaging eight to twelve months, the commercial size mussels are harvested, and the rest are transferred to new ropes at a mussel farm and left to mature.

Expect intense tangy umami, ocean-fresh flavor that’s boldy savory while only slightly sweet. The taste of ocean salt associated with seafood is stronger than green mussels, and they’re a little saltier. The fishy flavor lingers bolder and for longer as well.

All mussels have a similar chewy texture that cooks tender but firm. All species of black mussel are slightly softer than green mussels with less chewiness. There’s also less flesh. The meat can be compared to a consistency that’s midway between a green-lipped mussel and a clam.

No matter where in the world you may be, fresh and frozen black mussels are easy to find. China is the world’s largest exporter of black mussels by a significant volume, which means that unless you’re buying mussels freshly caught in your country’s waters, you’re most likely getting Mytilus galloprovincialis (Mediterranean mussels).

The black mussel is the most farmed species in the world, which also makes it the more affordable variety. US shoppers can expect to pay around $5 per pound.

Just like green mussels, black mussels need to be properly cleaned. Inspect that the shells are undamaged. They should smell fresh with absolutely no tinge of stench. We recommend soaking black mussels for 15 to 20 minutes so that there’s less salt, sand, and plankton stuck inside the shells. After scrubbing clean and removing the beard, your mussels are ready to cook/prepare and eat. The primary method of cooking preferred by most chefs is steaming or boiling, but they’re versatile enough to be removed from their shell and fried, deep-fried, sauteed, or grilled.

If you’ve been left wondering anything about black mussels vs. green mussels, our answers to the selection of most frequently asked questions has all the info you need.

Mussels are bivalve mollusks and filter feeders, which means that they filter plankton, their food, from the surrounding water. Each mussel growing at a depth of approximately 65 feet sucks in nutrient-filled water and excretes wastewater. Most species of mussels have a lifespan of between 7 and 18 years in the wild, while farmed mussels are harvested within two years.

What Are Green Mussels?

Green mussels, or Perna canaliculus, are bivalve molluscs that are native to the pristine water quality found off the coast of New Zealand. The feeding habits of green mussels rely on the indigenous nutrient-rich shellfish-suited environment. Conventionally, referring to green mussels classifies the green-lipped mussels of New Zealand but can also be a term of reference for the Asian green mussel, Perna Viridis.

What Are Black Mussels?

Black mussels is a name given to several species of bivalve molluscs, most commonly including Choromytilus meridionalis, Mytilus galloprovincialis, and Mytilus trossulus. Unlike the green-lipped mussels of New Zealand, black mussels are found all around the world.

Is It Safe To Eat Mussels?

The depth at which these incredible bivalves feed has earned them the reputation and connotation of being a bottom-feeder which is incorrect. Both black and green mussels are filter feeders, which means that they filter plankton, their food, from the surrounding water. The mussel sucks in nutrient-filled water and excretes wastewater which is where the risk arises.

While it is true that harmful algal blooms and other toxins can contaminate mussels, the vast majority of commercially produced filter-feeding shellfish are safe to eat. In the US, the FDA uses The National Shellfish Sanitation Program (NSSP) and other endeavors to ensure that mussels and other shellfish are safe for consumption.

How Many Different Kinds Of Mussels Are There?

There are over 1000 different species of mussel, and seventeen are known to be edible. Black mussels spanning four varieties, two types of green mussels, blue mussels and brown mussels, are the most commonly found species cultivated commercially.

What Is The Difference Between Mussels And Clams?

Even though both mussels and clams are mollusks, they’re distinctly different other than just having different colored shells. Just like mussels, white-shelled clams are also bivalve mollusks, but they only live in freshwater, not saltwater and freshwater like their counterparts. Also, clams don’t attach themselves to a substrate like an oyster or mussel.

Clams can grow much larger than mussels, and they’ve got a heart and organs as well as a mouth and a nervous system. Most shellfish lovers like the taste of clams raw, but few will eat mussels with nothing more than an acidic marinade – they’re almost always cooked. The fresh, umami fish-like taste of a clam is far bolder than a mussel, and clams are a little chewier when cooked.

The meatier consistency, milder flavor, and more subtle saltiness make green mussels the preferred choice for most seafood fans. However, one can’t deny just how well black mussels work in countless types of cuisine around the world. We recommend that you resort to black mussels most often to fill your nutritional needs and buy green ones when you feel like splashing out, treating yourself, or are in the mood for something lighter in flavor. 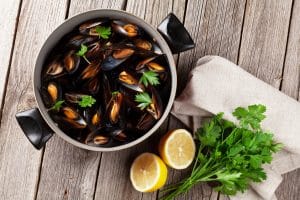 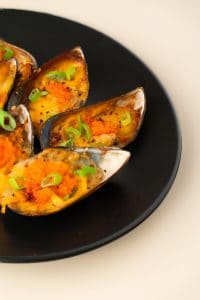 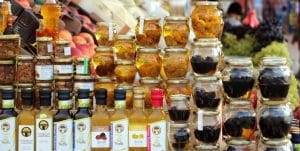 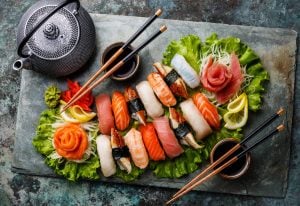 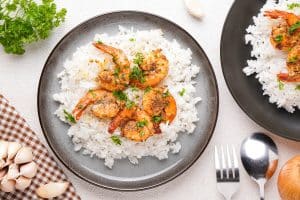 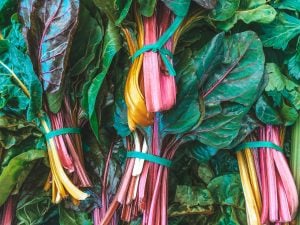