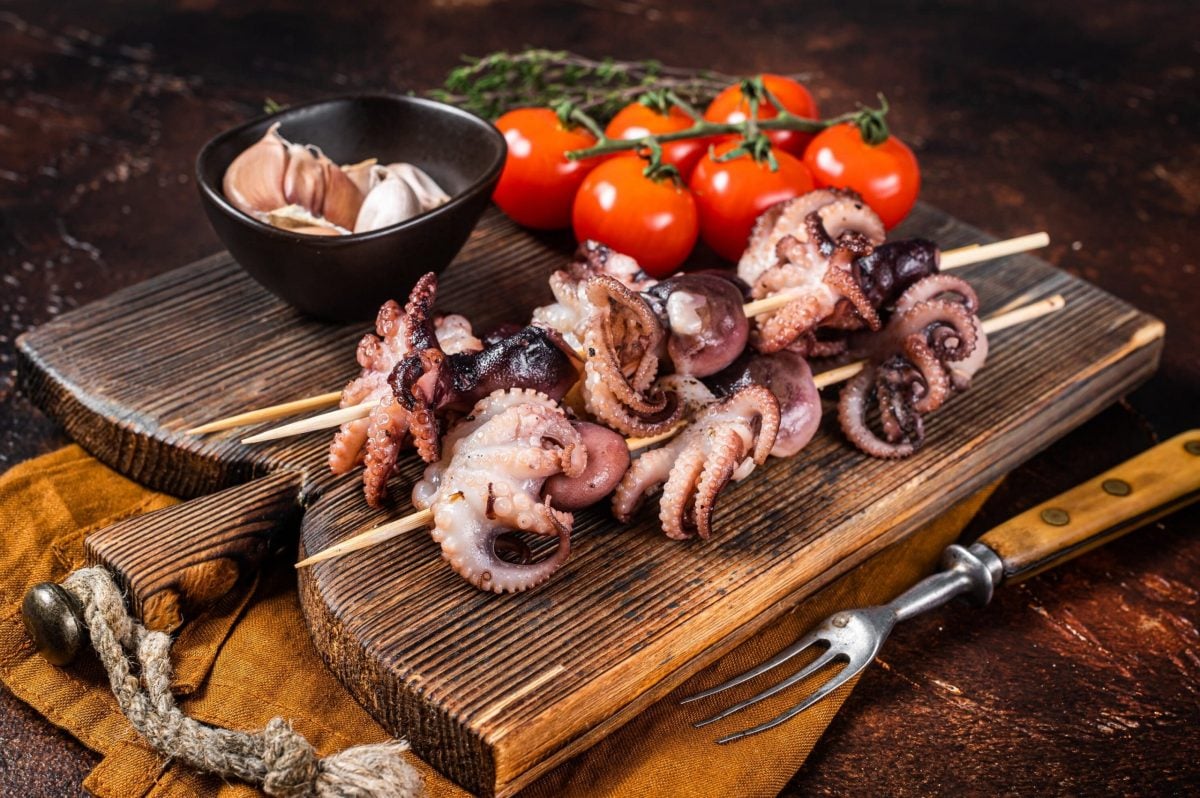 I’m a massive fan of seafood, and I’m happy to try anything at last once, but while I love calamari, I had yet to try octopus. When the local supermarket had octopus tentacles on offer, I knew I had to give this one a go. If you’ve ever wondered what octopus tastes like, you should know it’s definitely a seafood worth trying.

Fresh octopus tastes similar to calamari or squid when raw and is relatively flavorless. When properly cooked, octopus is moist and tender and picks up the flavors of the sauces and herbs used during preparation. The taste of cooked octopus has been compared to chicken, pork, or lobster.

To get the best out of cooked octopus, it needs to be correctly prepared and cooked; otherwise, you may end up with hard, rubbery, and unappealing meat. Because it tends to pick up the flavor of sauces and oils, some choices are better for cooking octopus than others. Most often, people refer to the arms/legs of the octopus when cooking, but the ink and the octopus head can also be consumed.

Octopus is rather flavorless seafood, and the best comparison to the raw taste is that it tastes somewhat like the sea. Usually, octopus is only served raw in select sashimi dishes, but most people prefer to cook theirs. Octopus tends to pick up the flavors of the marinades, sauces, oils, herbs, and spices used during the cooking process.

With this in mind, it’s good to know what flavors will complement your octopus and what dishes are most common. As a staple in many cuisines, ranging from Japan to the Maldives, Tunisia to Greece, you’ll discover that there are a wide variety of ways to prepare and cook octopus to suit your palate.

Octopus is a popular food not only for its mild, delicate taste but because it is low-calorie and contains Vitamin B3 and 12, selenium, potassium, and phosphorus. As a short-lived creature, an octopus has low mercury levels. These factors often make it a healthier seafood option than fish like tuna.

Even raw octopus is usually tenderized before serving. Octopus is sometimes served raw in Japanese sushi and is known as Tako. The best sushi will be prepared by skilled chefs who have picked the freshest stock and know exactly how to prepare the meat for optimum taste.

Sushi chefs will wash the octopus in saltwater and tenderize the meat by rubbing it with salt and chopped daikon to avoid a rubbery, slimy texture. These days, most octopus used for sashimi is not raw but has been boiled first to tenderize it.

The meat is sliced very thinly to ensure this delicacy is as soft and tender as it can be.

Raw octopus has been described as relatively flavorless, though you may have a hint of salty sea taste. A properly prepared octopus sashimi will have a slightly mild, sweet taste.

Like their relatives the squid, octopuses use a thick, dark mucus called ink to confuse threats and predators. While it’s usually squid ink that appears in pasta dishes, octopus’ ink can be used as a substitute.  Squid and octopus ink are considered virtually flavorless and add a subtle richness and a deep color to pasta sauces.

If your octopus is still whole, simply cut around the beak to remove it. Remove the intestines, brains, and eyes. The meat of the head tends to be thinner than the legs, but like them, it is essentially flavorless. If you have very small octopuses, you may even cook them whole with the legs and head still attached.

Because octopus heads can be at risk from cadmium poisoning, some people prefer to discard the heads rather than eat them.

Does Octopus Have A Fishy Taste?

Octopus is known to have only a very mild taste, sweet and slightly nutty. Octopus should never have a fishy taste or smell. Fresh, raw octopus will smell faintly like the sea, and if you can detect a strong fishy scent, then the octopus should be discarded and not eaten.

Fresh octopus will stay fresh for up to 72hrs if it is kept refrigerated, or you can freeze

And keep it in the freezer for approximately two months. Once cooked, the octopus must be kept in the fridge, where it can stay safe for up to three days.

Octopus that has been flash-frozen at sea can be kept I the freezer for approximately nine months. Many people prefer to use frozen octopus for meals as the freezing process helps t tenderize the meat.

If your octopus begins to smell foul or intensely fishy, it should not be consumed.

Is Octopus Tough To Eat?

Unless it has been properly prepared and cooked, octopus may be tough to eat. To avoid a rubbery octopus, chefs put some effort into tenderizing the meat before cooking it.

Several different methods are used, depending on the cultural norms and the chef. Some people tenderize octopus by beating it, others by boiling or sauteing, and others by massaging the meat with salt and radish.

You can avoid tough, rubbery octopus by cooking it slowly. Octopus will shrink as it cooks, and a long, slow cook time will give a tender, succulent texture.

When the cooking time is too short, the octopus will have a slightly chewy texture; however, on the reverse side, cook an octopus for too long, and you may end up with a lump of tasteless, dry meat.

If your octopus has been flash-frozen at sea, the process might improve the flavor and help the meat to tenderize faster. Octopus that is gently simmered until it is easily pierced with a knife will be soft and delicate. Small octopuses and large ones will have varying cook times because of the thickness of the meat, but an hour is a reasonable estimate for simmering time.

What Is The Taste Difference Between Squid And Octopus?

Squid and octopus are cephalopods, a class of sea animals with their arms and tentacles coming straight from their heads. Squid have triangular heads with eight arms and two tentacles, while octopuses have round, balloon-like heads and only eight arms.

Both squid and octopus have mild flavors and soak up other ingredients’ flavors, but squid is usually slightly less tender and a bit chewier. An octopus that has been boiled or poached will usually have softer, moister meat that is less chewy and with a lighter texture than squid.

Both benefit from long slow cook times, though squid can also be flash cooked over a high heat. Octopus does not fare as well when cooked for a short time over high heat, and the texture tends to remain unpleasantly rubbery.

How To Prepare Octopus

When buying octopus, you should try to get one that has been pre-cleaned for you. If you buy a whole octopus, you will have to remove the intestines, brains, and eyeballs yourself, which may not be a particularly appealing prospect.

Frozen octopus is perfectly acceptable, and some prefer it to raw due to the resulting tenderness of the meat. Frozen octopus will have been precleaned, which is a boon for those uninterested in the task.

The usual method of preparing an octopus is to simmer it for about an hour. Bring a pan of salted water to a boil, then turn the heat down and add the octopus. The liquid should cover the octopus, and the heat should be low. A long, gentle cooking time will produce the best results. If you cook the octopus quickly on too high a heat, the meat will become rubbery.

Once the octopus has cooked until it is tender (judge this by piercing the thickest section of the octopus with a sharp knife; it should go in smoothly), you can leave it to cool down in the liquid before removing it.

The Best Ways To Serve Octopus

Once you have adequately cleaned, prepared, and boiled your octopus, there are many delicious ways to serve it. In countries like Spain, octopus is an essential part of the tapas spread, while in Greece, octopus is commonly served on a meze platter. Octopus can be grilled, battered, and deep-fried, made into curries, or boiled and served with a sauce. Many coastal countries have perfected their way to serve octopus in a manner that enhances its wonderful ability to absorb the mixed flavors of other ingredients and highlights its subtle, tender flesh.

If you have successfully preboiled your octopus until the meat is tender, you will be guaranteed good results when grilling your octopus. Never grill octopus straight from frozen or raw, as the texture will be tough and unappetizing.

The boiling stage is necessary to soften the connective tissues in the muscles. Leave the octopus to cool down in the cooking liquid before removing it for the next step of the recipe.

Drain and dry your boiled octopus by patting it down with absorbent kitchen towels. Grill your whole octopus or cut sections by tossing them in seasoned olive oil and placing them on a grill pan.

You can grill them in the oven or over hot coals until the octopus is lightly charred on both sides and the thin ends of the legs have crisped.

In Osaka, Japan, Takoyaki is a popular street food made by filling a batter with minced octopus and cooking it in a special pan. These crispy snacks are brushed with Takoyaki sauce and Japanese-style mayonnaise and sprinkled with dried bonito and green laver.

This quintessential Osaka food is a portion of street food to be tried if you ever visit Japan. While the method is time-consuming, if you have access to a Takoyaki pan (or substitute an ebleskiver pan), you can make these battered, fried treats yourself at home.

Takoyaki is said to have a soft, moist texture, with a salty, slightly kelpy taste reminiscent of the sea.

Octopus with dipping sauce is a specialty from Korea. Slices of octopus cooked until tender are served with a sesame oil dipping sauce that brings out the delicate flavor of the octopus.

The dipping sauce is easily made with a combination of sesame oil and seeds. Simply slice your boiled, tender octopus into thin slices and serve on a platter with the dipping sauce. This is an easy and beautiful way to serve octopus.

From the Greek islands to Portugal and Spain, octopus is a staple part of the diet, and the whole octopus or legs  can often be seen hanging out on lines to dry when the fishermen return with their catch. In Greece, octopus is usually grilled in a mix of olive oil, garlic cloves, and oregano and can be served hot or cold.

A great way to use cold, cooked octopus is to add it to a summery salad of cilantro, red onion, red pepper, and sundried tomatoes, as they do in Portugal. There are many ways to incorporate octopus into a salad that complements the sweet and delicate flavor of the meat.

Cold octopus is often seen as part of the traditional meze foods across the Mediterranean.

As you can see, octopus is a wonderfully versatile seafood. It can be served with either minimal flavorings in order to let the subtle, delicate taste take center stage or braised in flavored oils and stocks, where it soaks up the rich flavors of the other ingredients.

When correctly prepared, octopus is tender and moist, with a slightly sweet taste to it that will have you going back for seconds. Try it warm with sauces, fresh from the grill, battered and fried, or cold in salads and meze.