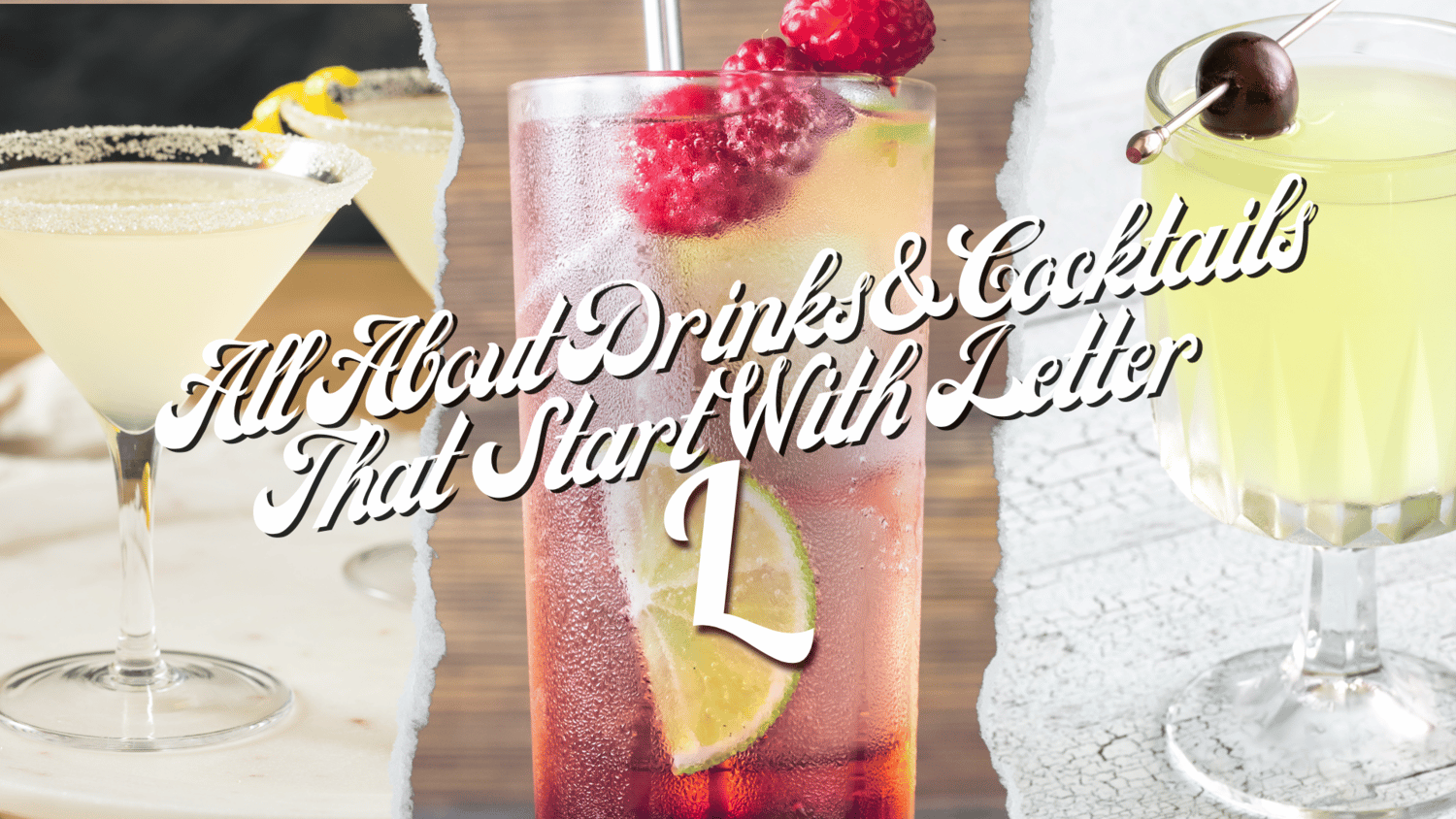 Welcome to the L drinks: land of Green Chartreuse cameos, more Martini variations, and New York City-derived libations aplenty. Whether you’re stopping by for cocktail inspiration or to learn more about some of your favorites, the L drinks are a fun group to peruse. Check them out.

The Last Punch is a Jose Cuervo brand invention. Essentially, the Last Punch is a tequila take on a punch drink. A bit stronger and somewhat more tart than a traditional rum punch, the Last Punch is made with high-quality tequila, green Chartreuse, maraschino liqueur, lime juice, and soda water. The ingredients can be mixed in a large punch bowl and garnished with cherries and limes. If you’re looking for a punch recipe that’s not too sweet, the Last Punch is a winner; best of all, it’s the perfect recipe for serving a crowd.

First served in Detroit, Michigan in 1915, the Last Word is a Prohibition Era cocktail of significant repute. Another drink made with green Chartreuse, and therefore green in color, this cocktail made a big comeback in 2008 after getting lost in history for many years. Of note, the Last Word is gin, green Chartreuse, maraschino liqueur, and fresh lime juice. These ingredients are cold-shaken and strained into a coupe glass then garnished with a brandied cherry. A well-balanced cocktail, the Last Word is slightly tart and minutely sweet.

Though little is known about the origins of the Legend Martini, it’s a sweet and tasty cocktail that’s undoubtedly worth trying. A wonderful variation of the standard Martini, the Legend Martini is most similar in taste and color to a Cosmopolitan than anything. The Legend Martini is made with vodka, lime juice, blackberry brandy, and simple syrup. Though it’s a strong drink as most Martinis are, the sweet simple syrup cuts the bite of the vodka and brandy blend. The ingredients of this drink are shaken in ice and strained into a chilled martini glass before being garnished with a lime twist.

This sweet and creamy Brazilian cocktail is a wonderful after-dinner or dessert drink. Though this dreamy concoction goes down smoothly, beware that its ingredients are high in alcohol content. Speaking of, the Leite de Onca is made with Cachaca (a sugarcane liqueur), creme de cacao, and milk. The ingredients are blended and poured over ice in tall glass before being garnished with shaved chocolate and a cinnamon stick.

The Lime Rickey is a deliciously refreshing non-alcoholic beverage that both kids and adults adore. A simple mix of bar-ready ingredients, the Lime Rickey was popularized in Washington, D.C. in the 1880s. A Lime Rickey is made with freshly squeezed lime juice, simple syrup, and club soda. It’s served over ice in a tall glass and garnished with a fresh lime squeeze. If you’re looking for a fancy spin on non-alcoholic drinks, this mocktail is a must-try.

If you’ve been following along since letter A, you’ve read about many variations of the popular Long Island Iced Tea. Finally, we’ve arrived at this legendary cocktail. The Long Island Iced Tea has been a much-loved cocktail since 1972; supposedly, it was given its name because the color of the mixed drink resembles a non-alcoholic iced tea. Significantly, a Long Island Iced Tea is tasty and strong. It’s made with vodka, rum, gin, tequila, orange liqueur, sour mix, and a splash of cola. The concoction is poured over ice in a highball and garnished with a lemon wedge.

A Lounge Lizard is a variation of the standard Rum & Coke; popularized in the early 2000s, it’s an easy drink to mix for both bartenders and at-home mixologists. The Lounge Lizard is made with dark rum, amaretto, and cola. It’s mixed in a highball over ice and garnished with a lime. If you’re looking for a quick and straightforward drink recipe, the Lounge Lizard is a great choice.

Although the concept of “love potion” dates back to ancient times, the drink is relatively new. Love Potion, which has many recipe variations, is an uber-popular drink around Valentine’s Day both for its name and pink hue. One of many popular recipes for Love Potion mixes vodka, peach schnapps, and grapefruit juice. It’s cold shaken and served straight-up in a martini glass.

This old-timey drink, a spinoff of the Manhattan, was likely named in honor of the immigrants who settled in the Lower Manhattan neighborhoods of New York City in the mid to late 1800s. Simply, a Lower Manhattan, the cocktail that is, is made with Irish Whiskey, sweet vermouth, and tobacco bitters. It’s served over ice in a rocks glass and garnished with an orange twist.

The Lychee Martini was popularized in the early 90s in the East Village of New York City. A tasty spinoff of the standard Martini, the Lychee Martini is a sophisticated and exotic blend of American and Japanese flavors. Of note, the Lychee Martini is made by shaking vodka, lychee syrup, and a splash of vermouth then straining the ingredients into a chilled martini glass. Lastly, it’s customary to garnish this cocktail with two lychees.

Created in Alabama but named for Lynchburg, Tennessee where the Jack Daniels distillery is situated, it’s no surprise that the base for this cocktail is whiskey. The Lynchburg Lemonade is sweet and refreshing and perfect for summertime imbibing. The Lynchburg Lemonade is a mix of Jack Daniels Whiskey, orange liqueur, lemon juice, simple syrup, and lemon-lime soda. It’s served over ice in a highball and garnished with a lemon.

No matter the L drink you reach for next, you’re surely in for a treat. From tasty dessert drinks to new spins on old standards, this list of drinks is a showstopper. Enjoy some of these old classics or newfangled fusions, either way, you won’t be disappointed.