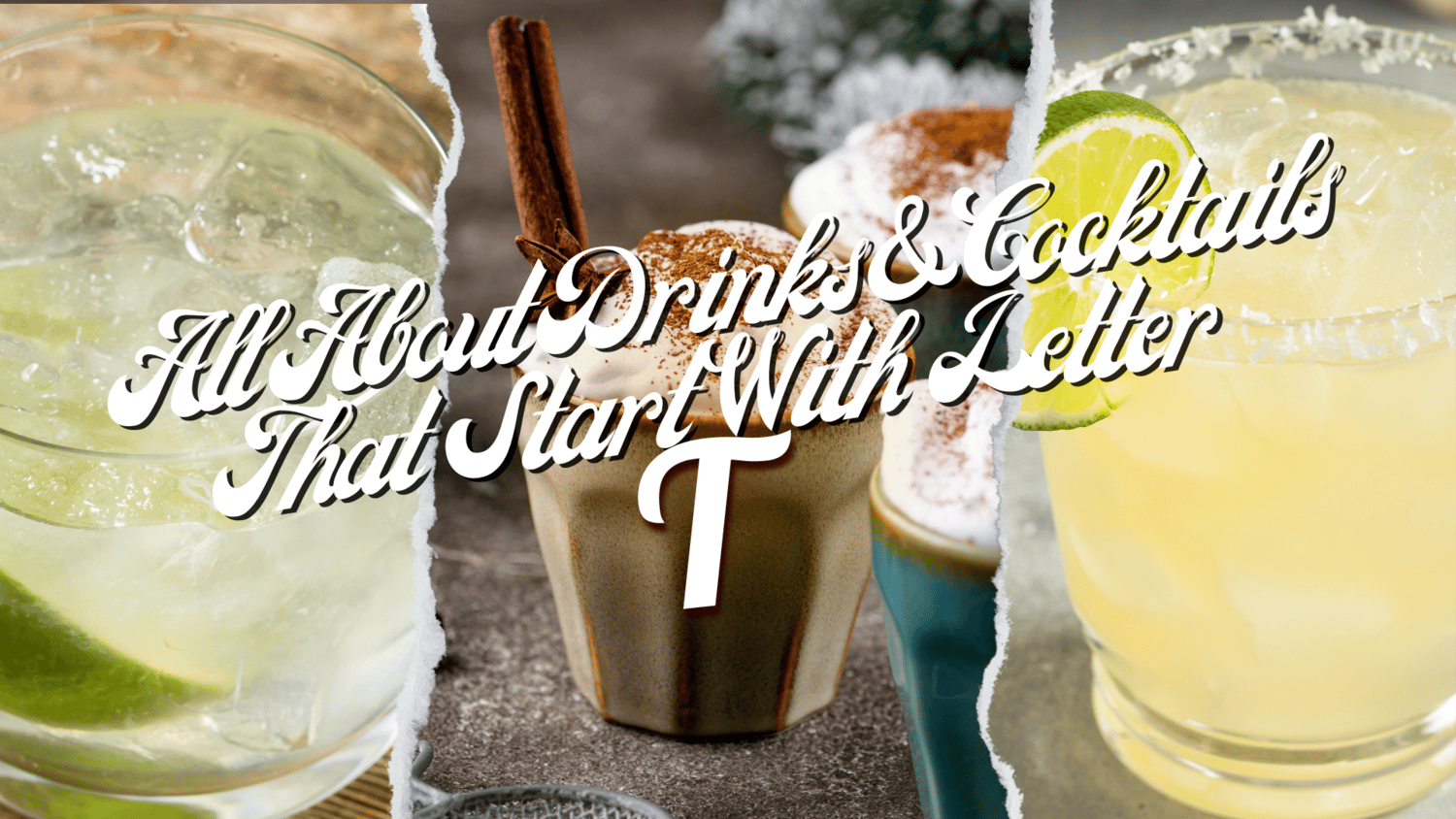 Filled with sophisticated Martini variations, Old Fashioned spinoffs, and other upscale cocktails, the T list of drinks is a good one. In addition to many uppity cocktails, the T list is also fraught with unique international recipes; from Japan to France and Mexico to the Caribbean islands, the T list covers a lot of mileage. Check it out!

Tamagozake is a traditional Japanese Sake drink. Often used as a home remedy to treat the common cold, Tamagozake is made with hot Sake, sugar, and a raw egg. Essentially, the Tamagozake is Japan’s version of the Hot Toddy. Though it is served outside of Japan, even in the U.S., it’s sometimes referred to as Sake Nog because of its egg content. Tamagozake is sweet and soothing with the Sake flavor at the forefront; it’s served in a footed mug and best-served piping hot.

Named for the suggested method of consumption, the Tequila Slammer is Mexican drink meant to be consumed shooter-style. A Tequila Slammer is also meant to be slammed on the bartop before shooting it to release the gases in its soda ingredient creating a foaming effect. Notably, a Tequila Slammer is made with tequila and a sweet soda such as 7-UP or Mountain Dew. The ingredients are carefully mixed in a shot glass; when served, you cover the shot glass with the palm of your hand and slam it atop the bar which creates a fizzing effect; be sure to quickly shoot it before it goes flat.

Maybe Mexico was feeling left out of the Sour family of cocktails when this cocktail was created. Those in the know agree that tequila is a perfect member of the family as it perfectly lends itself to sour, citrusy recipes. A Tequila Sour is a mixture of tequila and sour mix over ice in a collins glass. Some variations of the recipe call for egg whites which give it a velvety foamy head. Finally, a Tequila Sour is garnished with a cherry.

The Test Pilot was invented sometime after World War II by Donn Beach, a trailblazer of tiki cocktail recipes. Tiki drinks are the ones you’d think of if you were to belly up to a themed tiki bar. Tiki drinks, such as Mai Tais and Planters Punches, are juicy, fruity, and usually rum-based. The Test Pilot is one of these tiki drinks. A Test Pilot is made with both Puerto Rican and Jamaican rums, Falernum, orange liqueur, lime juice, bitters, and anise liqueur. The ingredients are poured over crushed ice and served in an old fashioned glass. The result of this concoction is a sweet and refreshing cocktail perfect for drinking poolside.

Originating sometime during the 1920s in Detroit, Michigan, The Last Word was popular through the 1950s until it petered out. However, in the early 2000s, The Last Word started its comeback tour and is once again a hot bar drink. The Last Word is a neon colored cocktail made of gin, lime juice, Chartreuse, and maraschino liqueur. The ingredients are shaken in ice and strained into a cocktail glass. Finally, The Last Word is garnished with a cherry or two.

The Three Wise Men is a shot paying homage to three whiskey brands with men’s names on their labels. In the case of this shooter, the Three Wise Men are Jack Daniels, Jim Beam, and Johnnie Walker. A Three Wise Men shot is less of a religious experience than one might expect, however, the punch this drink packs might inspire you to pray. Of note, the Three Wise Men’s ingredients are poured directly into a shot glass without chilling.

The Ti’ Punch, which translates to “small punch” in French, is particularly popular among French-speaking Caribbean islands. Named as the national drink of Martinique, the Ti’ Punch is a fruity, rum-based punch that is flavorful and inviting. Notably, the Ti’ Punch, unlike many punch drinks, is a simple blend of a few ingredients. The Ti’ Punch is made with rum, sugar cane syrup, and lime juice; it’s poured neat (without ice) in a highball and garnished with a lime wheel. The preparation is uncomplicated yet the taste is complex.

The Tom and Jerry is a U.S. concoction that originated in the late 1800s. It’s an eggnog-type drink that’s popular at Christmastime. Uber-popular throughout the Midwest, the Tom and Jerry is made with an egg batter constructed of separated egg parts. The egg batter is velvety and sweet and is mixed with hot water and either brandy or rum. It’s common to serve a Tom and Jerry in a footed mug and garnish it with whipped cream and grated nutmeg. The Tom and Jerry is a warm, comforting cocktail perfect for chasing away the winter blues.

Created sometime in the 1920s, it’s not clear whether the Toronto was created in the Canadian city or merely named for it. First called the “Fernet Cocktail” in a 1922 publication of “Cocktails: How to Mix Them,” the drink was soon after renamed the Toronto. Of note, the Toronto is a sophisticated mix of Canadian whisky, Fernet-Branca, simple syrup, and bitters. Akin to the Manhattan, the Toronto has a complex and rich taste with earthy undertones. The ingredients of the Toronto are shaken in ice and strained into a cocktail glass then finished with a lemon twist.

Created by an influential London bartender in the 1980s, the Treacle is a twist on the Old Fashioned. Even though crafting a Treacle is a bit involved as is the case with an Old Fashioned, the end result is well worth it. Significantly, a Treacle is made with rum, simple syrup, apple juice, and bitters. The ingredients are layered and stirred, a little bit at a time, on ice, in an old fashioned glass. Finally, a Treacle is garnished with a lemon wedge.

The Trumptini is the signature cocktail of Miami’s Trump International Beach Resort. Named for the proprietor, Donald Trump, the Trumptini is a twist on the classic Martini. The Trumptini was first crafted in 1992 and remains on the resort’s menu today. A Trumptini is a sweet and fruity drink made with Bacardi Limon (a lemon-flavored rum), orange liqueur, lemon juice, and cranberry juice. It’s shaken in ice and strained into a martini glass. The rim of the glass is salted and the Trumptini is garnished with a lemon twist and a scoop of salmon caviar.

The Tuxedo is a sophisticated cocktail with a variety of subtly different recipes. Created sometime in the late 19th or early 20th century, the first published recipe for the Tuxedo is in a 1903 version of “Daly’s Bartenders’ Encyclopedia.” The Tuxedo recipe in this early publication lists orange bitters, Maraschino, French vermouth, and maple gin as its ingredients. The drink is shaken in ice and strained into a cocktail glass and garnished with a lemon twist.

Whether you’re looking for something fancy to serve at your next dinner party or a more down-to-earth recipe for your next barbecue, the T drinks have you covered. Consider whipping up one of these fine cocktail recipes sooner than later! 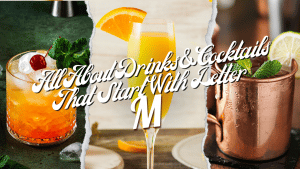